Tweet
print
write a letter
SXSW Film registration deadlines are looming. For filmmakers who intend to submit work, that means entries must be postmarked no later than Dec. 10. Applications can be done online at http://www.sxsw.com. For those of you without films to submit and who'd just like to wallow in nine days of utter filmic overload, early (and cheap) registration continues until Nov. 30 for a measly $135. Register online at the same address. It's still early, of course, but this year's fest is shaping up to be heavily indie-oriented with confirmed attendees Monte Hellman (Two-Lane Blacktop), producer Christine Vachon (Velvet Goldmine, Kids), Film Threat editor Chris Gore, and legendary producer's rep and bon vivant Jeff "the Dude" Dowd. (For those of you out of the loop, Jeff Bridges' character in the Coen Brothers' The Big Lebowski was reputedly based on Dowd. No word back on my persistent inquiries as to whether this year's fest will be holding a Dude/Dowd Night at Highland Lanes... As of this writing, Austin Film Society heads Rebecca Campbell and Rick Linklater are still in NYC recuperating from their award presentation at this weekend's Directors Guild of America Honors event. By phone, Campbell said the event went "wonderfully," with the highlight being the group photo which had her sandwiched between Kevin Spacey and Martin Scorsese. "The vibe of the AFS was very clearly communicated to this crowd of 800 pretty heavy New York film people," said Campbell. "I think we held our own right in there with the big guys, no problem." Linklater also received some feedback on his proposed plan to bring free cinema to 100 other cities. Clearly, AFS' plans for global domination continue apace... From Austin's Reel Women comes notice of the International Women's Day Community Media Festival, slated for next March 8. With a stated goal to "increase pro-social, progressive representations of and by women in non-commercial media; bring more women into media; empower women with skills; provide employment, learning, and creative opportunities for women in media; demonstrate alternative examples of media representations of women for mainstream media to follow, and to support community media," the festival is now open to proposals from all interested parties. Have an idea to empower women in media? Proposals must be received no later than Jan 15. Forms and instructions are available by calling 445-4272 or via e-mail at boswelia@hotmail.com... Screenwriters (aspiring and otherwise) take note: the L.A. Filmmaker's Alliance Professional Screenwriting Workshop is commencing once again, with both an L.A. course and an online version of the same. 20th Century Fox VP Christopher Vogler's seminal work on screenwriting, The Writer's Journey, is the text and comes highly recommended. Send e-mail to screenwriters@filmmak ersalliance.com or call 213/444-6868 for more info... The Austin salon for the Association of Independent Video and Filmmakers is holding its monthly meeting Mon., Nov. 29, 7pm, at the Texas Fine Arts Association (700 Congress). Call Rebecca Millner at 374-9551 for info... Finally, what better way to give thanks this holiday season than to watch Peter Lorre go all creepy over lithesome Frances Drake while Colin Clive gets stuck with a pair of possessed hands? Yes, it's the AFS screening of Karl Freund's little-seen classic Mad Love, tonight, 9:30pm, at the Alamo Drafthouse.
More Short Cuts columns 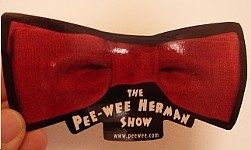 The Pee and the Fix
SXSW Film begins for this queermo