A Brush With Mark Borchardt 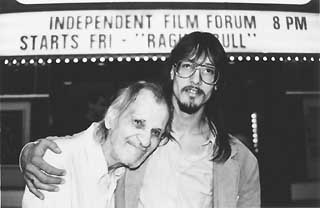 When you think of struggling American filmmakers duking it out against all odds to bring to the screen their one big shot at cinematic fame, chances are you're not thinking of anyone like Mark Borchardt, the subject of director Chris Smith's hilarious and affecting documentary American Movie ­ but then you've probably never thought of anyone like Borchardt since your high-school shop class. Clad in bulky flannels, ancient glasses, and a crowning mane of stringy brown hair, he resembles Rush's Geddy Lee more than your typical indie maverick, but don't let the back-country image fool you: Borchardt has the heart and soul (if not the funding) of a born filmmaker. Smith's film follows him over the course of two years as Borchardt struggles to alternately raise monies for his blue-collar epic Northwestern and finish off his short horror film Coven, all with the aid of friends and family and a stoic perseverance that would do Sisyphus proud. His aging Swedish mother fills in as director of photography from time to time, childhood pal ­ and devoted 12-stepper ­ Mike Schank ably acts as gofer and general source of humor throughout, and ancient Uncle Bill grouses amiably about getting his $3,000 back before he dies. It's no surprise, then, that American Movie has garnered rave reviews (it won the top documentary award at Sundance) and made Borchardt into something of an indie celebrity. "[My notoriety] hasn't changed one half of one percent, film-wise, what I'm doing," says Borchardt from New York City as he prepares to tape a recent segment of David Letterman's The Late Show. "All this can lead to is money to pay the bills and score some chicks and that's serious business, eh?" Asked how his admittedly marginal success has changed him, Borchardt says, "I've got my own apartment now, and that's where I'm going to stay. I've been working on [Northwestern] since 1984, at least in my head, and it means the world to me. So, I'm going to start shooting after winter, when the snow melts but the skies are still gray and the trees are still dead. I love Milwaukee."

For all the deadpan, Fargo-esque humor of Smith's documentary, American Movie is above all a testament to the power of the American Dream, and the lengths people will go to realize their own, special version of it. It's easy to laugh at Borchardt's manic vison of himself as the next Tobe Hooper or Sam Raimi, but by the end of Smith's film, you're practically cheering.