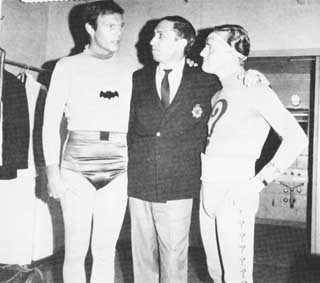 D: Oley Sassone (1994); with Joseph Culp, Alex Hyde-White, Michael Bailey Smith, Rebecca Staab, Jay Underwood. Imagine this scenario: A young scientist invents a space-worthy rocket ship, and while taking it on its maiden voyage, brings along not a team of experts but his three best chums. En route through space, they are bombarded by cosmic rays, which do not kill them but instead imbue each of the quartet with unusual and amazing powers, which they use to become the earth's greatest superheroes. That's the tale of the Fantastic Four, and if you think it's implausible, try this second story on for size: A young filmmaker is given the assignment to make a $100 million blockbuster sci-fi extravaganza starring the above-mentioned Fantastic Four. However, the owners of the celluloid rights to the heroes give him a paltry $2 million to do so. Undaunted (and no doubt enlisting the help of his closest pals) he completes the film, only to find it immediately shelved. Unbeknownst to him, and anyone involved in the production, the holders of the rights had the film made only because it was the sole legal recourse they could come up with to keep their hold on the characters until they could make the real movie! Truth is, indeed, stranger than fiction. In the comic-book world, however, the reality is that nobody stays dead for long, and the Fantastic Four are no exception. Bootleg copies of the film have since circulated to private homes and even video rental shops (as have the other programs mentioned on this page). And given the circumstances of its creation (its origin, if you will) it's not a bad little film at all. To appreciate The Fantastic Four, you have to first travel back to 1961, to the office of dinky Timely/Atlas Comics (later to become Marvel). Two men, Stan Lee and Jack Kirby, in desperation due to the paltry sales of the juvenile monster books that are the spine of the failing company, come up with a cold war tale of a team of superheroes with a twist -- rather than the larger-than-life Captain Marvel or Dr. Fate, these folks are human and have human quirks. Their adventures are also, however, a quick fantasy fix in the best comic book tradition -- plunk down your dime, read the book, hopefully gasp and/or chuckle here and there, then throw it away. Jumping ahead to 1994, it's a fairly safe bet that no Hollywood film (and certainly not the TV takes on the Incredible Hulk, Dr. Strange, or Captain America) has ever managed to evoke that cheap thrill better than The Fantastic Four. Produced by no less than the great schlockmeister Roger Corman, the film is all hokey, word-balloon-filling dialogue, melodramatic, hand-wringing plot and acting, and, er, adequate special effects. It's all gosh-wow in a sense that hasn't been seen since the atomic-age creature-features that inspired Stan and Jack's original creation. No sex, no swearing, just good guys versus bad guys in a battle to the finish. If it's not already obvious, much suspension of disbelief is needed to get through the film -- for instance, it's astonishing how long it takes scientist Reed Richards to figure out the villain Dr. Doom is his old college buddy Victor Von Doom (hmmm). Of course, he did think Victor was dead, but still ... If you're prepared to go in with the attitude of a 12-year-old picking up his first funnybook, you'll enjoy the H-E-double hockey sticks out of this film. If not, don't even bother.