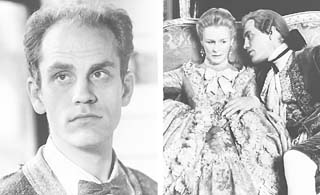 Video, Vulcan Video, and Waterloo Video for their help in providing videos, laser discs, and DVDs.)

D: Bruce Robinson (1992); with Andy Garcia, Lance Henriksen, Uma Thurman, Graham Beckel, Kathy Baker. Among the many great jokes in Spike Jonze's brilliant cinematic oddity Being John Malkovich (see Marjorie Baumgarten's review) is this: Everyone recognizes John Malkovich, but no one knows what films he's been in. "I liked you as that jewel thief," a cab driver shouts over his shoulder. "I never played a jewel thief," Malkovich responds coolly. You get the feeling this has happened before. But why is that? A veteran of stage and screens both big and small, Malkovich may be vague in our collective consciousness by virtue of his very common presence. With more than 40 films to his credit, surely every moviegoer has seen a few films with John Malkovich -- it's just tough to get them to name any. I think Malkovich maintains that vague familiarity also because he's not really a celebrity per se (another reason he's such an inspired choice by BJM screenwriter Charlie Kaufman) -- he's not a regular on the talk show circuit, he rarely gives interviews; I know absolutely nothing of his private life. In fact, the only things I know about the reputed thespian's life at all are the following facts: He co-founded Chicago's acclaimed Steppenwolf Theater Company with Gary Sinise, and he once lost 70 pounds in a 10-week Jell-O diet. It's remarkable that an actor as quirky as Malkovich could maintain such privacy after almost two decades in the business. But he's done it the way any self-respecting thesp would: He lets the work speak for itself.

After nabbing the attention of the industry and the Academy with his turn as the gentle Mr. Will, a blind veteran dumped on poor Sally Field's steps in 1984's Places in the Heart (did ya' remember that?), Malkovich secured leading man status with his devilish portrayal of Vicomte De Valmont in 1988's Dangerous Liaisons. After that, it seemed for a long time as though the actor was an omnipresence in film -- although I admit that, perhaps due to the fact that they both came to prominence in the late Eighties, Malkovich is an actor I occasionally confuse with Willem Dafoe. Malkovich did, in fact, star in about two films a year for a stretch of time. But throughout -- ah, the lot of a character actor -- Malkovich has performed in only a handful of roles people remember. Maybe this one rings a bell: 1993's In the Line of Fire, which earned the actor another Academy Award nomination, for playing a psychotic hermit out to assassinate the president. It was a perfect role for someone already garnering a reputation as, well, a little creepy. In the second half of the Nineties, film after bad film cemented that icky reputation: Mary Reilly, Con Air, The Man in the Iron Mask, Rounders. Geez, he wasn't just creepy, he had rotten taste as well. That's why I was surprised to recently discover that two of my good friends (both female) find John Malkovich irresistibly sexy. Sexy, you say? I always had respect for him as an actor, but this was new territory. Those twitchy eyes, the delicately pursed lips, the classic male "comb over," the limp hands -- this prig was sexy? Yes, they told me, he has Magnetism. He has Intensity. He has Presence. He has ... (and here, they would sigh and clutch their chest, as if words had failed them). More than his acting talent, more than his mysteriousness, more than his many films, and more than his oddly intellectual demeanor -- John Malkovich makes us feel something. Whether it's fear or disgust or admiration or plain lust. Now that's magnetism.

For me, the most memorable John Malkovich role can be found in Stephen Frears' luscious film version of the Choderlos de Laclos novel, Les Liaisons Dangereuses. Although I found the film a terrific bore when I first viewed it at 14 (and John Malkovich, well, he was no Keanu Reeves), these days I find it a fascinating study in narcissism and artifice. Full of pre-Revolutionary ennui, Valmont (Malkovich) is a French cad who amuses himself by toying dangerously with the human heart, a wicked hobby shared by the Marquise De Merteuil (Close), a woman so much like him that they must either lose themselves to passion or declare war on each other. They choose the latter. And eventually, they are both destroyed. Bewigged and covered in white pancake makeup, Valmont slithers from bed to bed, slipping under the sheets with both Cecile (a young Uma Thurman, whose nude scenes here, I'm informed, are nothing short of a revelation for some) and, eventually, the pious Madame De Tourvel (Pfeiffer). With its crushing climax, its lush, passionate cinematography by Philippe Rousselot (A River Runs Through It), and its stirring depiction of what desire will lead us to, Dangerous Liaisons is one of those rare costume dramas worthy of repeated viewings. And Malkovich is a pure delight, a truly odd leading man, who led film critic Pauline Kael to remark: "Some reptilian men are very successful sexually, but reptilian and fey make an odd combination." Still, it works. It is a leading role Malkovich never quite equalled in scope, despite eccentric starring roles in such actor-friendly vehicles as Of Mice and Men and television's Heart of Darkness.

Instead, Malkovich is known primarily for his work in the supporting actor department. A typical, although generally overlooked, example is his work in Jennifer Eight. A better-than-average thriller, Jennifer Eight follows John Berlin (Garcia), an L.A. cop on a feverish search for a serial killer targeting blind women in a small California town. An older (but still, at one point, topless) Thurman plays Helena Robertson, a beautiful blind woman who becomes involved with Berlin after he interviews her about a friend's mysterious disappearance. Jennifer is a slow boil, full of atmospheric rain and snow, subtle character study, and much meandering on the plot's part. Malkovich doesn't appear until almost an hour and a half in, although it's a blessed change of pace when he does. He plays St. Anne, a cop put in charge of interrogating Berlin when our protagonist eventually becomes ensnared in a friend's shooting. Malkovich exudes a coolly controlled menace, asking questions with the detached stare of a therapist one minute and then turning them like a screw into the back of our hero's neck. Although the film is never quite as clever or stylish as it would like to be, for Malkovich fans, it's a must-see.

And so, for that matter, is Spike Jonze's latest film. Whether or not audience members like it, it's sure to get people talking about this fixture of modern cinema. And one thing's for sure: No one will forget John Malkovich was in this one.