The Manchurian Candidate, The Train, Seconds 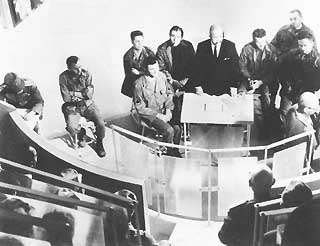 Frankenheimer's The Manchurian Candidate opens as a war drama: A platoon of American GIs in the Korean War on a reconnaissance mission are abducted by North Koreans and whisked away by helicopter. From there, we enter a character's recurring nightmares about a ladies' garden club meeting, discover the naked political ambitions of the numskull neo-fascist Senator Iselin (Gregory) and his scheming, evil wife (Lansbury), and meet a career Army officer, Bennett Marco (Sinatra), struggling to get to the bottom of it all. To give away more of the convoluted plot would be a sin. During the Korean War, American GIs were indeed captured by the enemy and used in mind-control experiments; the term "brainwashing" didn't even exist before the early Fifties. Richard Condon's novel and Frankenheimer's film builds on this idea, with Harvey as Raymond Shaw, the pawn at the center of the game. The Manchurian Candidate comes across as an unusually entertaining and absorbing movie that simultaneously carries elements of science-fiction, right-wing Cold War political thrillers, satire, and melodrama. It all comes together in a lurid recipe that gets better with each viewing. At the time of its release, the film went nowhere with critics; screenwriter George Axelrod said, "It went from failure to classic without ever passing through success." The film is filled with outrageous visual and thematic non sequiturs. There is a shooting in which the bullet, before it hits its intended victim, passes through a carton of milk first, and a stream of milk pours out as he dies. During the film's climax, Marco and an associate are searching for someone at the Republican Convention, but they pause to salute during the "Star-Spangled Banner" before breaking into a chase. Nearly every suspenseful scene is interrupted by some similarly weird moment of comic relief. The dialogue and characterizations are no less bizarre; Harvey inexplicably picks up an English accent as the film progresses. Harvey's character is a thoroughly unlikable, clammy sort, but as he realizes along the way, he's been manipulated by the communists and his mother alike, and his pain becomes very real toward the movie's end. Sinatra is given more than one Rat Pack-esque line (he refers to his recurring dream as "a real swinger of a nightmare"). The usually cuddly and charming Lansbury is an evil, castrating bitch; it's surprising that she wasn't typecast as such in future roles. The dialogue between Janet Leigh and Sinatra as they meet for the first time (on a train) is purely oddball, as she refers to being "one of the original Chinese workmen who laid the tracks on this stretch." Iselin restages McCarthy's famous Wheeling, W.V., speech as he brandishes a list containing "the names of 207 communists" during a press conference and nearly turns it into a riot; Frankenheimer shows the action from a TV control room, on TV monitors as well as in real time. It's a disorienting effect that points to the director's background directing shows such as Playhouse 90 and Studio One. At the end of the day, The Manchurian Candidate ultimately confounds any efforts to look at it from any politically convenient position like the right or the left. Any other film may not have been able to carry off its tabloid absurdities, yet Frankenheimer demands that we swallow them whole (and we do). It's no wonder that the French New Wave embraced this movie as they did.

In the waning days of World War II, the Nazis were being pushed further east toward Germany. As a sort of economic hedge, they looted the great art treasures of France and loaded a train with Chagalls, Monets, Van Goghs, Picassos, and other priceless paintings, as they headed for the German redoubt. Through deception and sabotage, the French resistance managed to stop the train from ever making it to Germany, while preserving the artworks inside. Frankenheimer committed this story, based on the novel Le Front de l'Art by Rose Valland, to film. While completely different in feel and mood from the two other Frankenheimer films discussed here, The Train is still a top-notch action movie, pointing toward the work Frankenheimer would do in the Seventies. He did a remarkable job of reigning in Burt Lancaster as Labiche, the French railroad administrator whose job is to drive the train (and ultimately stop it). Labiche's Nazi counterpart (Scofield) turns in an equally fine performance. The characterizations, however, have to share the stage with the spectacular action sequences. The Train must have been an extremely expensive movie to produce in 1964; Frankenheimer wrecked a huge amount of railroad rolling stock in the process, ramming trains into each other, bombing them with B-25 bombers, and running them off the tracks. His attention to detail throughout is remarkable; it obviously never occurred to him to stage the scenes with miniatures or models. Lancaster did his own stunt work throughout, leading one to wonder about the limp he took on halfway through. The Train certainly delivers the goods. It's certainly refreshing to see an action movie that has a heart and a soul, with characters that have dimension, and performances that aren't strictly by rote.

In Seconds, Arthur Hamilton (Randolph) feels hemmed in by his comfortable middle-class life in the suburbs -- his stale marriage, his daily commute, his mundane job as a banker. He's approached by a mysterious organization that promises to give him plastic surgery to alter his appearance, place him in a new life with a new identity and completely different surroundings. Hamilton is hesitant at first but eventually gives in and is placed as Tony Wilson, an artist in a new community, his features molded into Rock Hudson (Hamilton's death was faked by the organization). At first, Wilson is happy with his new role, but eventually he becomes uneasy and begins to long for his old identity and life. The organization, though, has other ideas: They insist that he "sponsor" another candidate for the procedure. Wilson soon finds out that it's not as easy as just cutting all ties and going back to his old self. Seconds has a deliberate pace and an uneasy, oppressive atmosphere of mistrust and dread that calls to mind Polanski's films. Like The Tenant or Repulsion, the off-kilter feel of the movie never finds release by film's end (which is one of the more unnerving finales I've seen lately). Randolph is a familiar character actor from TV and film (along with Will Geer, who plays a mysterious but kindly old man in the film, Randolph was blacklisted in Fifties Hollywood) and excels as Hamilton. In a scene in which Hamilton is drinking and staring out a train window on his commute home, his loneliness and isolation are very real and palpable without a word spoken. Hudson's role is a reminder that he was more than a handsome side of beef and that he could actually act. His character discovers that he's living in a community of "seconds" (or "reborns") during a cocktail party he throws at his postmodern pad. He becomes more and more sloppy drunk as the evening wears on, until his fellow seconds decide it's time to spring the news on him; it's his worst fear come true. The stark black-and-white cinematography was done by the great James Wong Howe. Coupled with a cold-sounding score and Frankenheimer's direction, the movie has a great sense of economy and pacing. Be careful what you wish for.