The Passion of Sam Peckinpah 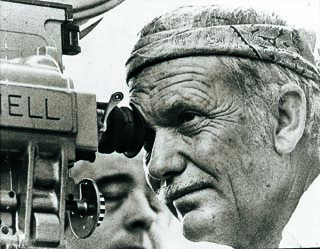 When Charlie Sotelo of The Show With No Name

came to me saying that he thought what Austin needed was a Sam Peckinpah retrospective, I wholeheartedly agreed and sent him over to the Austin Film Society for support. Next, Charlie came to me and said he had this idea for a monograph and asked if I would help. He had all these ambitious plans for what it would look like and who would contribute. I encouraged his enthusiasm, but never fully anticipated that he would manage to make most of his visions come true. As this eight-part film series was put together, Sotelo also contacted many of the country's most eloquent writers on the myth and the movies of Sam Peckinpah to contribute to the series' accompanying monograph. It turns out that there is a strong core of "Peckinpites" out there, all of whom were eager to contribute new essays for this project.

Contributors include three of the most autoritative biographers of Peckinpah, Garner Simmons (Peckinpah: A Portrait in Montage), David Weddle ("If They Move ... Kill 'Em": The Life and Times of Sam Peckinpah), and Paul Seydor (Peckinpah; The Western Films: A Reconsideration). Writers Max Evans (The Hi-Lo Country, Sam Peckinpah: Master of Violence) and James Hamilton (Cross of Iron) contributed their memories, as did editor and filmmaker Monte Hellman (Killer Elite, Two-Lane Blacktop). Critics Michael Sragow (Salon, and former Rolling Stone and The New Yorker) and Kathleen Murphy (Film Comment) were eager to participate, but the most stunning repsonse came from Pauline Kael, who in earlier essays (especially "The Nihilist Poetry of Sam Peckinpah") had offered the most inspired dissection of Peckinpah's work on record. Although Parkinson's disease had caused Kael to retire from The New Yorker (and writing in general) many years ago, she agreed reluctantly because her health would prevent her from doing anything "substantial." She then turned in 2,000 brilliant words that have ensured this monograph's future as a collector's item. Of course, once word got out, The New Yorker was panting for first dibs on their former star critic's insights. So, who were we to say no ­ especially since all these writers contributed so generously of their time and energy? Look for Kael's Peckinpah piece in the Nov. 1 issue of The New Yorker and for it to appear in the Chronicle at a later date.

Other contributors to the monograph include David Thomson (A Biographical Dictionary of Film), Harry Knowles (Aint-It-Cool-News), Jonathan Valin (author of the Harry Stoner mysteries), University of Texas Distinguished Teaching Professor Charles Ramírez Berg, and Austin Chronicle editor Louis Black. As a group, this monograph's essays represent a distanced re-evaluation of the films of Sam Peckinpah. For so long, Peckinpah was popularly known as little more than a choreographer of blood ballets and a studio renegade; the time has come to reassess our common presumptions, uncover the sensitivity and warmth in the films, and examine the truths underpinning the myth of Peckinpah as an "outlaw saint." A good example of this can be seen in the excerpts from two different essays by Louis Black. The first is from an obituary he wrote for the Chronicle in 1985, shortly after Peckinipah's death. Louis also wrote the introduction to this monograph, which announces the collection's reappraisal of the Peckinpah legacy.

We are proud to reprint here selected portions of this monograph. Copies of this historic work will be on sale at the screenings. The series begins on October 21 and continues through December 16 at the Alamo Drafthouse.