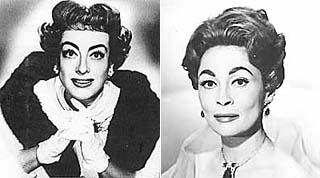 Joan Crawford (l) and the woman who played her -- Faye Dunaway

D: Ranald MacDougall (1955); with Joan Crawford, Barry Sullivan, Betsy Palmer, John Ireland, Fay Wray, Tim Hovey. "Darling, parties are to women what battlefields are to men. But then -- you weren't in the war, were you? Something about drinking ..." Joan, Joan, Joan -- completely over-the-top in this movie, yet, completely under-the-table in her private life. This is the last gasp of her semi-respectable moviemaking period before she gave way to the scream-queen roles and went full-throttle into her alcoholism. "If this is what America wants, then, by God, I'll give it to them," she was quoted as saying at the time. I don't know if it's what America wanted, but it's certainly what I wanted -- Joan in her best "mow-'em-all-down" mode, chewing up

the scenery and looking divine in clothes by Jean Louis (that's Zsh-an Lu-wee). They don't make actresses like this anymore, and they certainly

don't make movie roles like this anymore. The inherent Joan-violence was more insidious, rather than graphic, as it later became in such charmers as Berserk and Strait-Jacket. Except at home, of course, where Joan performed her Queen Bee routine nightly under the name of "Mommie Dearest." Daughter Christina has said that Joan's

portrayal in this movie hits very close to home. The story (this time) seems to revolve around Joan (naturally), as Eva Phillips, wife of "Beauty" Phillips (Sullivan), who is anything but. The arrival of a cousin to fill a rather nebulous "secretarial" position for Joan/Eva sets off an ugly chain of events. The secretary, Jennifer, who is "so quiet we ought to put a bell on" her, becomes the recipient of one of Joan's famous slaps. A lot of Beauty's dysfunctional family and friends hang around a lot, including Carol, played by Betsy Palmer ("Carol, don't you

look sweet, even in those tacky old riding clothes!"), who hangs around so long she winds up hanging on the business end of a rope. Everyone drinks a lot, and Joan keeps the whole show hopping with her machinations and new outfits for every other sentence. With a particular shot of Joan in an evening gown, standing on the staircase in her home as its calling card, this movie definitely bears several viewings to absorb the excess of high camp, but, like drugstore perfume, once absorbed, you'll never quite get rid of it. Favorite moment: Eva "clearing off" the dead Carol's mantelpiece with a sweep of her riding crop.