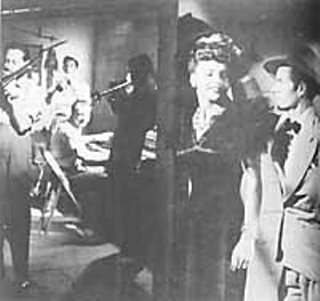 D: Robert Siodmak (1944); with Alan Curtis, Ella Raines, Thomas Gomez, Franchot Tone, Elisha Cook Jr., Fay Helm. Engineer Scott Henderson (Curtis) is stood up by his wife on the night they intended to go to a musical. While moping in a bar, he makes the acquaintance of another woman; rather than let the tickets go to waste, the two impulsively agree to spend the evening together. The only condition she puts on the evening is that they withhold each others' names and just enjoy the company. Henderson returns home to find a house full of police and his wife strangled with one of his own neckties. He confesses that his marriage was not all peaches and cream. All his possible alibis dry up and, of course, Henderson can't direct the cops toward the "phantom lady" herself. He finds himself on trial, convicted, and sentenced to death for his wife's murder. His secretary, Carol (Raines), is convinced of his innocence and finds an ally in Inspector Burgess (Gomez), the detective who thinks the conviction was a little too tidy. With Burgess' help, the intrepid secretary sets out to clear Henderson's name and smoke out the actual killer. Taken from a Cornell Woolrich novel, this noir thriller has all the earmarks of Woolrich's pulp works, with a hapless protagonist cornered by circumstances and a race against time to prove his innocence. Director Siodmak (The File on Thelma Jordan, The Killers) takes the dime-novel story and infuses it with a major-studio classiness that helped make it a hit and brought his stock as a director up several notches. The movie is executed with such high style that the main characters nearly take a backseat to the noir flourishes that pervade the film. In her search for clues, Carol seduces Cliff (Cook), the drummer from the musical. The two of them go for a night on the town and wind up at a jazz jam session where Cliff sits in. In an amazing scene, Cliff takes a drum solo (actually dubbed in by Buddy Rich) that is pure Freudian innuendo, his face frozen in a leering rictus of lust while Carol makes come-on motions and the other players blast away on their horns. Jazz as sex? It's as open a sexual metaphor as you'll see in a Forties film, with Cliff eyeing her up and down and mentally undressing her. Siodmak did a great job of marrying his Germanic film vision with a slam-bang, American-style pulp thriller, and the result is this entertaining, stylish movie.