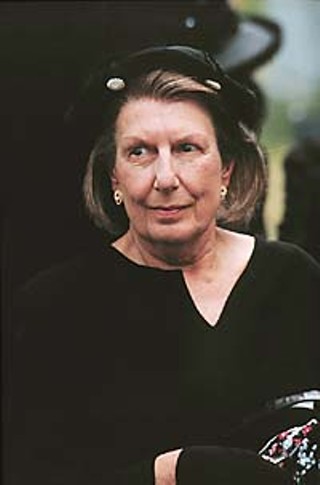 The Emmy Awards made their share of mistakes, but overlooking The Sopranos' Nancy Marchand seemed the most grievous.

There was a lot of groaning in my house and one jubilant "Yes!" during the Emmy Awards, broadcast on Fox last Sunday. In last week's "TV Eye," I made some predictions on who Emmy would pick, listed who the entertainment media was placing bets on, and made some awards of my own in the form of the Claries (named for Clare, the Patron Saint of Television). It's a good thing I'm not a betting woman, or else I would have lost my shirt. That Emmy, it seems, is one fickle dame. The most shameful oversight was of Nancy Marchand, nominated as best supporting actress in a drama for The Sopranos. She did not win, and no one was more surprised than the winner, Holland Taylor, of The Practice. In fact, Taylor, along with several other contenders who were pit in some category against The Sopranos, seemed genuinely stunned by their wins. When David E. Kelley's The Practice won best drama of the year, immediately followed by a win for Ally McBeal as best comedy, Kelley remarked that when he was told to go back onstage to accept for McBeal, he thought they were telling him there was a mistake -- that the best drama award was supposed to have gone to The Sopranos.

Though the entertainment media placed their chips on Jimmy Smits to win best actor in a drama for his exit from NYPD Blue (Clare went with James Gandolfini of The Sopranos), Dennis Franz walked away with the prize.

The Sopranos did take two well-deserved Emmys. One for outstanding writing for a drama to James Manos and David Chase, and the second to Edie Falco for outstanding actress in a drama. (This is when the jubilant "Yes!" occurred.)

Some of the most disappointing awards -- and surprises -- occurred in the comedy awards categories. The entertainment media thought this would be the year for Friends as best comedy. I gave the Clarie to Everybody Loves Raymond, betting on the middle-aged leaning of Emmy voters. We were both wrong. The award went to McBeal, but that was the only award they got. Calista Flockhart was once again overlooked for best actress, as were the writers and supporting players Peter MacNicol and Lucy Liu. Why Helen Hunt (Mad About You) was rewarded again as best actress in a comedy is a mystery to me. There must have been a sigh of relief from other contenders in this category, as this is the last year for Hunt to win, now that Mad About You has signed off. It's also the last year to watch Hunt's co-star and show creator Paul Reiser lose the best actor in a comedy award, this time to John Lithgow of 3rd Rock From the Sun. Lithgow's co-star, Kristen Johnson, was awarded for best supporting actress in a comedy. Frasier took the rest of the comedy awards, one for writing and one for David Hyde Pierce as best supporting actor. It's not that I'm anti-Frasier, but the season was not up to its previous standard, so for one of its more lackluster episodes ("Merry Christmas, Mrs. Moskowitz") to win a comedy writing award is downright sad. Though I had not considered Pierce in my selection, I was reminded of his comic agility when the scene of him literally setting his brother Frasier's apartment on fire was replayed as one of the most memorable moments on television last season. That turn alone probably won him the prize.

There were some nice surprises and well-deserved wins. John Leguizamo (Freak) and Chris Rock (The Chris Rock Show) won performance and writing awards, respectively, in the variety show category, and A Lesson Before Dying won awards for outstanding made-for-TV movie as well as for its writing. All were HBO products. With the exception of The Sopranos' Falco, the miniseries and variety show categories seemed to be the only ones that Emmy voters were willing to give to the cable networks, leaving the series prizes for the non-pay networks.

An interesting addition to the Emmy proceedings was a popular vote, done over the Internet, of the most memorable scenes in the last television season. The selections were, in descending order: Roberto Benigni's Oscar win at the Academy Awards; the scene from Buffy, the Vampire Slayer, in which Buffy provokes Angel to feed from her; Jimmy Smits' final death scene in NYPD Blue; the Miles-trashes-Frasier's-apartment scene mentioned earlier; and the closing moments of the season finale of Friends, when it's discovered that Ross and Rachel eloped.

Well, so much for my predictions. You win a few, you lose a few. I will say that if such clearly outstanding work like The Sopranos is overlooked in the future, it could diminish the importance of the Emmys, at least from my perspective. However, my perspective, like that of most media watchers, is not always the popular perspective. Take note of the memorable scenes voted on by ordinary viewers. There were no cable shows represented on the list, and there certainly were memorable moments on cable. The Sopranos, Oz, Arliss, Sex and the City (all HBO), and Any Day Now (Lifetime) certainly had some great moments. So what gives? We know that all non-pay network watchers are not always watching cable, but are cable watchers watching the non-pays? And what does this mean for the future of the Emmy Awards? If Emmy is dedicated to the non-pays, with only a narrow response to cable series, is there potential for an alternative to the Emmys, say, in a few years, once the cables have more series programming on their schedules? I wonder. As always, stay tuned.

A slew of new series premieres hits the air starting Sunday. Here's a quick rundown of what's coming up: