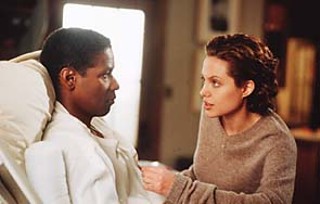 This year's contender for Documentary Breakout Hit is this gentle, funny, passionate, and focused study of a man in Wisconsin pursuing his American Dream. The movie's subject, Mark Borchardt, is obsessed with making his dream movie, but the would-be filmmaker possesses more drive than cash. Yet nothing daunts his ambition and nothing deters his will, though the observer might sometimes wonder whether it's spunk or madness that propels Borchardt's quest. (Nov. 24)

ANNA AND THE KING

Veteran film actress Jodie Foster dons 19th-century garb for this period piece update of the celebrated journeys of Anna Leonowens, who was hired by the King of Siam to educate his 58 children. Chow Yun-Fat departs from his usual action fare for what looks to be a richly decorated, cross-cultural love story. (Nov. 24)

Just when you thought Chris O'Donnell was never going to recover from his poo-poo performance as the boy blunder, we find him here chasing after the scent of Renee Zellweger in a modernistic retelling of the Buster Keaton comedy classic Seven Chances. With a storyline that precedes Brewster's Millions, O'Donnell plays a confirmed bachelor who must find a bride and hitch up in 24 hours in order to collect an enormous inheritance. (Nov. 5)

This stylish and moody serial killer thriller is already being compared to the most recent gems of its genre: Silence of the Lambs and Seven. Jolie plays a policewoman who must join forces with a brilliant detective, quadraplegic Rhymes (Washington), to track the killer. (Nov. 5)

The boy next door has a secret, one that he's hidden from the guys in his fraternity, his best friend, and himself: He's sleeping with one of his frat brothers. (Nov. 12)

Surely this is the most anticipated movie of the season, what with the brouhaha over Miramax's buy-back of the movie from parent company Disney, who was a bit skittish about the satire's controversial religious attitude and the righteous backlash of the Catholic League. Affleck and Damon play a couple of fallen angels, Alanis Morissette plays God, and Jesus has a descendent working in an abortion clinic. We say release this already, and release us from this Dogma Interruptus.

In what should be an unconventional thriller, a confused British woman has obsessive romantic fantasies about the adventurous Joseph Lees, a situation which causes problems both for Lees and the man with whom she lives. (Nov. 26)

In yet another millennial fever thriller, the last action hero plays a former cop thrust into a diabolical chase with Satan, who is searching for a bride in the final countdown to 2000. (Nov. 24)

Searching for a lost love on the streets of Birmingham, England, Felicia (Cassidy) is picked up by an older gent named Hilditch (Hoskins), who goes to great lengths to aid her cause, all the while hiding his own pain and loss from her.

One part My Left Foot and one part Wigstock, this film, written and directed by Joel Schumacher (of Batman Forever ill-repute), takes on the heady task of teaching New Yorkers that it's okay to reach out to those strange-looking drag queen neighbors who live one floor up. (Nov. 24)

Even William Shatner can't resist turning up to play himself in this good-natured comedy about two young men weaned on popular culture and their experiences in Hollywood.

Both a portrait of an individual musician and the story of a unique cultural exchange, Genghis Blues is a documentary about the travels of blind blues musician Paul Pena to Tuva to learn the ancient art of Tuvan throat singing (in which a singer can produce four notes simultaneously).

Jane Campion (The Piano, Sweetie) directs this story about the relationship between a young Australian woman who joins a religious cult while in India and the American deprogrammer hired by her parents to rid her of her foolishness. As the nature of their contact grows, the tables gradually turn from a questioning of religious assumptions to a questioning of personal sexual politics.

Director Michael Mann and Al Pacino reteam after the success of the critically acclaimed Heat for another tense, edge-of-your-seat action-thriller which revolves around a whistle-blowing researcher, Jeffrey Wigand (Crowe), who was the main witness in lawsuits filed by every state in the Union against the tobacco industry and eventually settled for some $246 billion. (Nov. 5)

Val Kilmer taps into the darker side of his ego as an abusive father in this family drama from actor-turned-director Frank Whaley. As teenager Joe (Fleiss) makes his first advances toward adulthood, he must confront his dictatorial father in order to earn respect for himself and avoid falling into the fate of despair which consumes his family.

From the director of Cinema Paradiso comes this tale of virtuoso pianist Novecento (Roth), named after the year he was born. Roth plays this poignantly alienated musician, who performs on a ship and lives his life without ever touching land. The film won five Donatellos (Italy's version of the Oscar), including Best Picture, in 1998.

After a beloved teacher is fired at Lincoln High School in Queens, N.Y., an uprising ensues from the student body, and a security guard is shot and taken hostage. Framed as a kind of reverse Stand and Deliver, the producers of Soul Food offer up a hearty teen drama that weighs the issues of education, empowerment, and the might of the media. Expect stunning visuals from cinematographer Elliot Davis (Out of Sight). (Nov. 5)

THE LOVERS ON THE BRIDGE

Michèle, a young artist running from a failed relationship and slowly going blind, and would-be circus performer Alex love, struggle, suffer, and bacchanal with Paris' oldest bridge and the city's streets and waterways as backdrop. (Nov. 26)

MAN OF THE CENTURY

In this homage to studio films, Frazier plays Johnny Twennies, a fast-talking, stogie-chomping newspaper reporter oblivious to his surroundings in modern-day New York. Abraham's hysterical man-out-of-time schtick is an inspired and memorable piece of cinema which played to thunderous applause in its screenings at last year's SXSW.

Just when you thought we were running out of Jane Austen novels to adapt, along comes Mansfield Park, a film version of the author's third novel. Canadian director Patricia Rozema, best known for her lesbian romances When Night Falls and I've Heard the Mermaids Singing, also wrote the script and incorporates some of Austen's letters into the story. (Nov. 19)

THE MESSENGER: THE STORY OF JOAN OF ARC

Acclaimed French director Luc Besson (The Fifth Element) swaps outer space for a 15th-century landscape in which he recounts the extraordinary exploits of the legendary girl-warrior Joan of Arc (Jovovich). Dustin Hoffman, not a usual resident of period pieces, joins a heavyweight cast which aims to deliver on its positive early word of mouth. (Nov. 5)

PLAY IT TO THE BONE

Rival professional boxers Vince Boudreau (Harrelson) and Caesar Dominguez (Antonio Banderas) get one last shot to fight one another -- if they can make it to Las Vegas under a strict deadline. Roaring down the interstate with a fetching driver, Grace Pasic (Davidovich), the two sparring men knock heads over women, fighting, and the past that brought them to where they are now. (Nov. 12)

Can you say "target market?" I'll bet your kids can. The mind-altering Japanese card and video game blasts its way onto the big screen featuring a whole new breed of "super bio-engineered Pokémon" whose powers "rival those of Regis Philbin." Follow the animated adventures of Pokémon masters Ash, Misty, Brock, and, of course, lovable scamp/hentai Pikachu as they wage an unending battle for your child's allowance and your own peace of mind. Filmed in Twitch-o-Vision. (Nov. 12)

After the disappointing Mars Attacks!, we're all praying for a return to form for wunderkind-creepster Tim Burton, and with Johnny Depp as spindly detective Ichabod Crane and Christina Ricci as his chesty damsel in distress, confidence is running high. Seven scribe Andrew Kevin Walker pens the tale while Miranda Richardson, Jeffrey Jones, and some presumably diminutive stuntperson (as the Headless Horseman, natch) round out the cast. Boo, scary. (Nov. 19)

With Splendor, independent filmmaker Gregg Araki creates a kind of social experiment in which slacker bohemians Abel (Schaech) and Zed (Keesler) share the love of aspiring actress Veronica (Robertson). What ensues is a delicate look at what happens when accepted norms are turned on their head and taboo takes a back seat to unadultered want. (Nov. 19)

Directed by Anders and Voss (who collaborated on 1987's Border Radio), Sugar Town splays open the desperate struggles of Los Angeles musicians trying to make it. Peppered with real-life music stars, the film's biggest surprise is a starring role for Duran Duran's former bassist, John Taylor, as a UK rocker.

Matthew Perry, Neve Campbell, Dylan McDermott, and Oliver Platt star as architects in love in this "offbeat romantic comedy" that also involves voyeurism and a wacky mistaken-as-gay subplot. Sounds thrilling, I know, but it's got to be better than the last season of either Party of Five or Friends. Director Santostefano comes to us from Nickelodeon, where he helmed episodes of The Adventures of Pete and Pete. (Nov. 12)

After the astounding success of the original animated film, this sure-to-be-a-hit follow-up was as inevitable as Stephen King's next New York Times bestseller. In this go around, cowboy toy Andy (Hanks) heads for summer camp and is stolen by an evil toy collector. It's up to Buzz Lightyear (Allen) and co. to save the day. (Nov. 24)

If the idea of a concentration-camp comedy sounds familiar, it does to director Mihaileanu as well. He allegedly showed this script for Train of Life -- a story about a village of Central European Jews who decide to escape the Nazi roundups by deporting themselves in an elaborate charade and then making a fast break to the Promised Land -- to Roberto Benigni, who passed but then went on to make Life Is Beautiful.

The mercurial actor Tim Roth debuts as a director with this emotional family drama that focuses on the claustrophobic dynamics and dysfunctions that bubble below the normal-seeming surface of things.

THE WORLD IS NOT ENOUGH

For the 19th MGM installment of the ever-popular James Bond franchise, Pierce Brosnan checks out his government-issue spy wear for yet another turn as the suave secret agent 007. As anyone familiar with the series could guess, Bond's mission follows a time-proven formula -- save the world, suck face with the chicks, and throw back martinis. Yeah, baby! (Nov. 19)