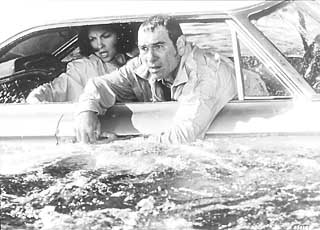 Rose Troche, the director of Go Fish, at last returns with her second film -- a romantic comedy set among gay men in England. Two flatmates (but not bedmates) are on opposite ends of the casual sex/commitment equation, but their explorations open up questions about love in the Nineties. (Sept. 24)

One woman meets the woman of her dreams just hours before her mother and brother are to move in with her. The soundtrack includes songs by Sarah McLachlan, Ani DiFranco, Bif Naked, and Ferron, and the film just played in the Austin Gay & Lesbian International Film Festival. (Sept. 17)

Martin Lawrence brings his manic energy to the fore as a jewel thief who must impersonate a detective to retrieve the $20 million he stashed underneath a construction site three years ago. While in prison, the site developed into an L.A. police precinct, and the talents he brought to his career as a thief also earn him extra points as a crime fighter. His rookie police partner is Luke Wilson, who headlines a top-notch supporting cast. (Sept. 17)

Friends compete in this French comedy to see who can bring the most boring guest to dinner. One man brings an accountant who then takes over his life. (Sept 17)

Quicker than you can say The Fugitive and certainly faster than you can say U.S. Marshals, Tommy Lee Jones stars in this thriller as a parole officer on the trail of Ashley Judd, here playing a prison escapee falsely jailed for the murder of her husband. Bruce Beresford (Tender Mercies, Driving Miss Daisy) directs. (Sept. 24)

ETERNITY AND A DAY

The 1998 Palme d'Or winner at the Cannes film festival, Eternity and a Day, is a meditative tale by the director of Ulysses' Gaze. The film follows the memories of a man who is preparing to enter a hospital at the end of his life. (Sept. 24)

FOR LOVE OF THE GAME

Costner is itching for a home run with this story of Detroit Tigers pitcher Billy Chapel, who reflects on his crumbling marriage and career while on the mound. Based on the novel by Michael Shaara, the film marks a return to its star's familiar territory: sports and women. Raimi comes off directing the superlative psychological drama A Simple Plan, but teaming with Costner just seems scary, even for a man whose previous stars included the evil dead. (Sept. 17)

Unfolding side-by-side are the telling of Fyodor Dostoevsky's The Gambler and a reconstruction of the circumstances under which it was written -- Dostoevsky at the time being in dire financial straits, drinking, and gambling. The film also features the return to the screen of Luise Rainer (The Good Earth, The Great Ziegfeld) after a 50-year absence. (Sept. 17)

This nightmarish French film is not for the complacent. It tells the bracing story of a butcher as he's released from prison for an assault on the man he thought had raped his mute and semi-retarded daughter. He is unemployed because his horse meat shop has closed; he moves in with a shrewish woman and violently fights with his pregnant mistress. The movie also makes us privy to his inner monologues of hate. (Sept. 28)

Pump Up the Volume meets Life Is Beautiful in this World War II dramedy starring screen favorite Robin Williams as Jakob Heym, a meek Jewish cafe owner. In order to fight low morale in his devastated Polish town, Jakob broadcasts fictitious news reports from his own radio transmitter which overestimate Allied advances. As the Germans catch wind of the operation, Heym risks certain death for his cause. (Sept. 24)

Love Stinks is what you get when you blend the talents of the creator of Full House and Hangin' With Mr. Cooper (Franklin), one of the stars of 3rd Rock From the Sun (Stewart), another star from Mortal Kombat (Wilson), the host of MTV Jams (Bellamy), and a supermodel-turned-actress (Banks). The film is billed as an "unromantic comedy" for people who realize that sometimes the best sex in the world just isn't worth it. (Sept. 10)

At the ripe old age of 60, Blade Runner screenwriter Hampton Fancher makes his directorial debut with The Minus Man, a story that follows the life of Vann Siegert (Wilson), a man who has the ability to reflect like a mirror the emotions of every person with whom he comes in contact. (Sept. 24)

Unrestrained honesty has an intoxicating effect on the citizens of a small town after a psychologist named Mumford (Dean) invades their routine existence. As Mumford dispenses her no-nonsense advice, the cast of eager patients fall into unexpected romances as unrequited affairs rise to the surface. (Sept. 24)

Volker Schlöndorff presents Nazi history as a kind of grotesque fairy tale in this drama starring John Malkovich as the "ogre" of the title. He plays a man tossed around by the times and who is incapable of drawing moral distinctions. The movie asks whether he is a naïf or villain. (Sept. 17)

Dennis Rodman rebounds back onto the big screen despite the infinite foul reviews he drew for Double Team. Here we find the NBA basketball star stretching his chops as the title character of Simon, a suave Interpol agent who must recover the kidnapped daughter of a wealthy American businessman. What the film lacks in originality, it just might recover with its cybermonk characters and Swedish kickboxer villainess. (Sept. 24)

The boys are back with a new collection of classic animation shorts, most of them classic prize-winners and international favorites. Some highlights include the 1998 Oscar-winner "Bunny," Don Hertzfeldt's Slamdance winner "Billy's Balloon," and the 1969 cult delight "Bambi Meets Godzilla." The presentation usually includes a live emcee and lots of onstage shenanigans. (Sept. 17)

Arquette plays a typical young Gen X-er who becomes increasingly haunted by inexplicable and disturbing spells. When a chance videotape captures one of her encounters with a neighborhood priest during one of these episodes, the Vatican dispatches its own investigator (Byrne) to look into the problem. (Sept. 10)

With echoes of Poltergeist filling the storyline of this psychological thriller, director Koepp stakes his camera inside a blue-collar Chicago suburb and unearths a terrible secret which comes to fruition after a resident (Bacon) is adversely affected by a post-hypnotic suggestion given to him at a neighborhood party. (Sept. 10)

When Gabriel (Campbell), a would-be musical theatre playwright, tries to spice up his life by having a one-night stand with exciting, mysterious Mark (Pitoc), his efforts are tested by a series of obstacles. Unable to find a location for their hot and heavy, the two men end up getting more acquainted with each other than they'd intended, an ultimately gratifying thing in a romantic comedy. (Sept. 10)

When Dad and his tomboyish daughter both fall hard for the same guy, things obviously get complicated. Add to the situation that they are all living together in a mobile home while moving about making their livings as pickpockets. This German comedy offers an unusual take on the classic love triangle. (Sept. 10)