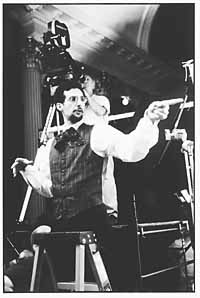 John Turturro always makes a strong impression in whatever film he appears. Whether playing the mind-warped title character in Barton Fink or the hapless pizza purveyor caught in a race riot in Do the Right Thing, the weaselly gangster begging for his life to be spared in Miller's Crossing or the middle-class nebbish in Box of Moonlight, the flamboyant Phil Spector knockoff in Grace of My Heart or the skunked sore loser in Quiz Show, the ex-con neighborhood bully in Five Corners or the oddball Fifties family man in Unstrung Heroes -- what Turturro as an actor brings to his characters is, quite dependably, one of the most memorable things about each of the movies he's in. He is also one of the standard-bearers of independent filmmaking, apparently choosing jobs on the basis of the script's character potential and the opportunity to work with certain artists. He has become a resident fixture in the films of Spike Lee and the Coen brothers. He has now directed (and co-written) his second film, Illuminata, a movie about the players in a struggling, turn-of-the-century repertory company. Their relationships with each other and how these are affected by the intermingling of their work and love affairs is the movie's focus. As in the earlier film he directed, Mac (1992), Illuminata focuses on characters who take their craft very seriously. We had the opportunity to talk with Turturro one afternoon recently while he was taking some time out from the all-night shooting schedule of the upcoming Coen brothers film, O Brother, Where Art Thou?

Austin Chronicle: What drives you to direct in addition to acting?

John Turturro: Probably the story, or the theme of it. And getting to use different facets of yourself. And working with a group of people that you choose. Obviously, the price for that is a very big one in every way: time-wise, financially. But both times it's been tremendously, tremendously rewarding to myself. And educational too. In both cases they were stories that I don't see every day but that I think are, in many ways, everyday stories or things that we all go through every day and never usually explore in storytelling ways. And I felt that the theme of the piece -- what it is to have a relationship that can exist through all its difficulties -- is something that we all go through. And the world that it's set in is a world that I spent a good deal of my life in. So these are two of the reasons.

I feel that in so many movies people just fall in love and then that's it. Well what happens at the end of Shakespeare in Love? It doesn't really resonate with me as a man anymore. Not that falling in love doesn't resonate with me but what it is to love someone ...

JT: Yeah, what it is to even have a deep, long, long friendship. In this film it's also that these people work together. So they're dealing with the struggle of what it is to stay together and create something.

AC: And what about the obvious parallels to your own life?

JT: That's for me to know, and you to guess. There's different aspects of many relationships, there's a lot of my relationship with Brandon [Cole, the co-screenwriter] -- not physically, but he's been a guy who's struggled for years as a writer and I've been an actor who's worked with him a lot and I've been fairly successful. We had a friendship when we started out, we both were putting our own money into the plays that he did. So there's plenty of that. With me and Katherine [Borowitz, star of Illuminata and Turturro's spouse], I work more than Katherine, but I'm a man and there's much more for me to do than there is for her. We are in different positions, and I know how difficult that can be. And also how unhealthy that can be too. But I switched those positions around for the film for many reasons.

I'm not interested in doing personal psychodrama or anything. But a lot of films today are devoid of people saying, "Here's how I look at the world; here's what's personal to me." When you see the great filmmakers (even people who worked within genres and worked in the studio system) you think they still put very personal things in their films -- hidden and some more overt. When I look at this film, not just the central relationship, when I look at the film I see a lot of myself -- throughout the whole film, in all these people. But hopefully, that's done in an entertaining, engaging, or maybe moving way. And that's something that I know as a viewer I appreciate.

AC: Throughout your acting career you've so consistently chosen good material. What is your secret?

JT: Well, I've been fortunate, I have to say that. And I'm grateful. I really am. Sometimes I've made the more challenging choices for myself, not the more overtly, maybe commercial choices, but that's served me well in the long run. I like to try to do things that interest me as a person and would interest other people like myself when they're watching it.

AC: The two things you've directed are not just about the everyday things, but also family relationships. And you work with family frequently.

JT: I think friendships, relationships, marriage, your love relationship ... those are big things in everyone's life. Those are dominant themes in my life. I treasure the friendships I've had a long time because they're very rich and sometimes you get to a point where you just don't have to talk anymore. You're comfortable. I'm working with Joel and Ethan Coen again right now and they're friends of mine and it's just a different experience. And a good one. I think those things are to be valued and not just to be thought of in conventional terms. It's nice to see what it takes to keep those things alive. I think those are the dilemmas we all face every day and they sometimes are the dominant themes of our life. And work, probably. And then you can say, "Here's what I believe in, or politically here's where I'm at." But those things are essential. I guess that's just who you are. I mean, I can see a movie like Pulp Fiction and really think, "Oh, that's really well-done." When I come out of it I don't really remember anybody from there. I just don't. I remember the structure of it. I don't feel like it enriches me in any way. I don't say that in an old-fashioned conservative way or anything. I just felt like it's well-done, but it doesn't stay with me.

AC: One of the things you do so well is to create characters who are cerebral, who are dealing with issues or working through things. And you also use a great physicality to create these different characters. You have found in some kind of physical way to express the processes of the mind.

JT: Thank you. That's really what your job as an actor is.

AC: Something like Pulp Fiction, where there's just so much visual and structural snap that catches your eye while it goes past, you don't necessarily follow the mental processes the characters go through. You see their actions.

JT: Well, that's a different thing. Some things aren't just about action. Obviously, people are interested in different things. I can watch something that is filled with action and be interested in it. Maybe to do it doesn't interest me as much. Obviously, I was trained in the theatre and I've done a lot of theatre so to me it's really sort of the words and the people that are important. To me, when I see stuff that I know relates to me but I can't completely understand, but I know it, I recognize it -- that I find exciting and thought-provoking and sometimes, even beyond that.

AC: Earlier you said that working as a director was "educational." How so?

JT: You're confronted with what you think is interesting. You're confronted with how you see things, visually, emotionally, the feel of it, your sense of humor, what you value, and then it's projected back to you and you're just sitting there in a state of shock, saying, "Oh my god." Because you don't really know as you're doing it. You can only know so much until it's realized and then other people make it their own and they bring their own contributions. So that's the excitement of it. But you really find out things about yourself that you're not aware of. It's like saying, "Oh, this is how I look at things, I didn't know that."*

Illuminata opens at the Arbor Theatre on Friday, August 20.