Accidentally, the Army releases the product of its ongoing biological warfare experiments on a small Pennsylvania town. Soon, much of the community is affected by a virulent hallucinogen; in effect, three-quarters of the town is tripping, only they don't know it. The Army shows up in gas masks and pure white germ-proof suits to mop up their mistake. Wraithlike, these soldiers move through the town, only there is little way for them to tell who is infected and who isn't. In the chaos, even sane people appear crazy. The confusion of modern warfare is mirrored here -- who is the enemy? Inspired by the true story of a small French town infected with hallucinogenic bread (which had some mutated mold on it), The Crazies was shot by Romero, as usual, in Western Pennsylvania on a nothing budget. The film's narrative/thematic ingenuity and Romero's stylistic flourishes keep it moving along, but its low-budget breeding is evident everywhere. More than with most independent filmmakers, the texture of Romero's work keeps him from being fully appreciated. In a remarkable run of movies beginning with the seminal Night of the Living Dead (1968) and continuing through Jack's Wife (1972), The Crazies (1973), Martin (1978), and Dawn of the Dead (1978), Romero undertook an almost systematic re-evaluation of the horror film genre. Trying to preserve the genre's mythic heritage and totemic powers, he was also incorporating the tales into modern times. In Romero's world we have met the monsters, and they are us. In Jack's Wife and Martin he looks at, respectively, witchcraft and vampirism. In both films he asks the question: Is this a psychotic breakdown or supernatural intervention? In The Crazies, by the end, the question is: Between the Army and the acid-crazed citizenry, who are the monsters? Here no mythic creature or curse plagues the population, just other people. Romero pushes this further in Dawn of the Dead by speculating that when there are more monsters (the living dead) than there are of us, what's normal? Lest this seem too pontificating, Romero works with a zest for the horror genre, rapidly and deftly switching tone from drama to comedy to horror. Ironically, his bigger-budgeted films such as Creepshow (1982), Knightriders (1981), and Monkey Shines (1988) aren't as rich or vibrant as their low-budget brethren. The Living Dead films may overshadow his other work, but The Crazies finds him at his best. Using ideas to compensate for budget, Romero turns in a surprisingly ambitious and entertaining work. --Louis Black

aka Handle With Care 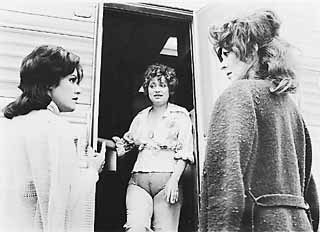 Demme has evolved into such a mature cinematic visionary that watching his early films may be a little startling. Few films by Demme were ever less than inspiring, but his style and ideas constantly evolved. Videotape makes the whole Demme catalog available. There is his beginning career in exploitation, including the brilliant opening duo of Caged Heat (1974) and Crazy Mama (1975), followed by Fighting Mad (1976), and then the humanist comedies, Handle With Care (1977), Melvin and Howard (1980), and the TV movie Who Am I This Time?. The early Hitchcockian attempt that was an important failure (The Last Embrace, 1979) preceded Melvin and Howard's critical success, which was itself a prelude to the second important failure, Swing Shift (1984), in which a temperamental star takes production away from the director. The brilliant, unexpected recoup that was Stop Making Sense (1984) and the more mature black-comedic adventures Something Wild (1986) and Married to the Mob (1988) ended the decade. Everything changed for Demme with the blockbuster critical success Silence of the Lambs (1991) and Philadelphia (1993), and last year's Beloved. Along the way, he directed documentaries including Haiti Dreams of Democracy and Uncle Bobby, filmed a stage play (Swimming to Cambodia, 1987) and executive produced such films as Miami Blues, Devil in a Blue Dress, That Thing You Do, and Ulee's Gold. All this by way of saying that Citizens Band (aka Handle With Care) is a flat-out masterpiece, a Jean Renoir-esque compassionate, humanist take on white rural culture, in which the society is now held together by CB radios. We are who we are and that's all that we are or need to be in Demme's world. He threads together a number of stories including hero LeMatt's CD vigilante campaign and, most hysterically, the consequences for trucker Napier's bigamy after his rig crashes. Napier holes up with his old friend, Hot Coffee, the local hooker, until his two wives descend on the town in the same bus, at the same time, sharing a seat. This is Demme at his most exuberant. With a clear passion for all these characters, he sketches a series of strange relationships, between father and son, between brothers, between husband and wives, between friends, between ex-lovers, between fantasy lovers. All these relationships resonate more deeply when they are played out over the CB radios than when acted out in each others' presences. The terrific cast excels. The brilliant script is the debut effort by Paul Brickman, who went on to write The Bad News Bears in Breaking Training (1977), Deal of the Century (1983), and True Crime (1999), as well as write and direct Risky Business (1983). One of the least cynical of the great American filmmakers, Demme embraces his characters and tells their tales with relish. In and of the world it is about, Citizens Band would be best seen at a drive-in but, lacking that, your TV will just have to do. --Louis Black

Not exactly his best material, but John Carpenter's first foray into vampire movies has several shining moments. The plot revolves around a group of Vatican-sanctioned vampire busters led by the profane Jack Crow (Woods). After fanged badass Valek (Griffith, looking like Marilyn Manson) singlehandedly destroys his crew, Crow and buddy Montoya (Baldwin) seek revenge. Lucky for them, they nab a hooker (Sheryl Lee) who's been nipped by Valek and has a telepathic link with him. The whole thing is predictable, but it has plenty of merits. For one, Woods is quite excellent as the foul-mouthed, obnoxious Crow. He's not the usual muscle-bound stake wielder (see Wesley Snipes in the inferior Blade). He's just a 40-ish skinny guy in a leather jacket who screams expletives while jabbing arrows into bloodsuckers' vital organs. Likewise, the rugged Baldwin is well-cast as his surly lieutenant. Fun, to say the least, and bloody as hell, the film provides a good break from the current horror fad of Scream-alikes. Carpenter has a knack for these kind of outings. His treatment is concise, quick, and fairly clever. He also throws in a dose of cynicism, which may deter Anne Rice enthusiasts but certainly makes for a provoking thrill ride. --Mike Emery