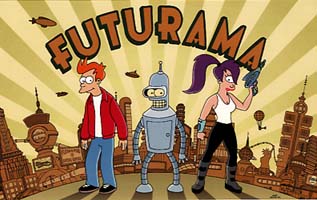 You may have seen thepremiere of Futurama on Fox last Sunday and listened to all the pre- and post-air chatter, but it still merits repeating: Matt Groening rocks. After all the contentiousness he had to endure to get this project aloft (see last week's "TV Eye"), Futurama is a triumph for Groening, who stuck to his vision and turned out the product he aimed for.

Here are a few thoughts on the show that I haven't seen elsewhere: Although animation is often appraised in technical terms, I have to say that Futurama is often just plain lovely to watch. The limitless imaginings of what the future will look like surely inspired the artists of Futurama. Cityscapes and street scenes are visual feasts, while still offering the visual ha-ha's Groening fans have been groomed to look for. Did you catch the Akbar marquee or Groening's own head in the Head Museum?

In addition, there are plenty of sci-fi conventions for Futurama to borrow from, and the first episode borrowed shamelessly. The automatic doors are courtesy of Star Trek. The devastated New York cityscape is from Beneath the Planet of the Apes (the one starring James Franciscus). The emergency take-off in a space craft of questionable quality is a nod to the Millennium Falcon in Star Wars (among countless others). And Leena (Katey Sagal, Married ... With Children) busting out of her jumpsuit to commandeer the craft is reminiscent of Sigourney Weaver's Ripley in Aliens. But instead of being slothfully derivative, Groening has taken the genre and re-created it with his own conventions, while playfully poking fun at previous ones.

Groening's insistence on a non-utopian vision of the future in Futurama made Fox network execs sweat. The idea of an alcoholic robot sidekick and suicide booths on every corner did not strike them as Sunday evening family entertainment. But these are small concerns, really, as the show overall is good-natured and positive. And utopia does peek in and out of Futurama. The image of our hero Fry (Billy West) sailing across the sky through a clear, pneumatic tube recalls the ecstasy of the dream to fly that is the stuff of mythology, dream analysis, and at least one Broadway musical.

Why so much ink over a silly cartoon? Because Futurama is more than a cartoon and not all that silly. It joins a line of cartoons that work within a 'toon geography that belies a more subversive goal. The thing that's so great is that a lot of these adult 'toons are actually making it to prime time, or at least to television in general, and that the concerns they engender in execs are much more timid than what actually makes it to the screen.

If shows set in the future can be said to be commenting on the present, then Futurama hits its mark. The edginess doesn't come from the fact that an alcoholic robot literally dumps bricks when he's scared, or plummets into suicidal episodes, but that a world symbolically close to ours is put up for consideration in the most benign form of entertainment, the animated cartoon.

It wasn't that long ago that the idea of a national identity card was bandied about. The fear over the porousness of U.S. borders, particularly the one shared with Mexico, continues to heat discussions about citizens' entitlements: Who belongs here, who doesn't, and how are we going to save our American borders from being overrun by that mass of undesirables?

Sci-fi movies of the Cold War glorified the American way of life while casting the alien outsider -- communists in the guise of Martians -- as an evil bent on our destruction. Futurama comes at today's alien issue from an outsider's perspective. Leena, a displaced, one-eyed alien, is the only one of her kind on the planet. Bender (John DiMaggio) is a robot, non-human, and therefore the ultimate service worker. They, together with Fry, who haplessly finds himself in the year 2999, are placed in a world where genetic testing serves as the ultimate job placement service. But at service to whom or what? How interesting that a microchip (the national identification system come to life?) poked into the palm serves as a form of lifelong branding, assuring job security and delegation to a tier of a hard and fast caste system.

Fortunately, the mission of Fry and friends is to fight against the new world order of Futurama, not in the "us against the big bad world" approach from the past, but from a more personal, contemplative position among a family formed of necessity and from all indications, a developing sense of affection. Given all that, Futurama looks like a swell ride. You have another chance to catch it this Sunday at 7:30pm. Futurama's regular time slot will be Tuesday nights at 7:30pm, starting April 6.

Other cartoons that come dangerously close to telling the truth: Daria (Sun., 6:30am; Mon., Tue., and Thu., 2:30pm; Fri., 7:30am, MTV): Can you imagine an equally smart and sardonic female as the centerpiece of a live sitcom or drama? Sure, there are smart women on television, but they are usually cast as dowdy frumps, or at the other extreme, have porcelain skin and look good in a short skirt when needed. Daria falls somewhere in the middle. Does she wear make-up behind those moon-shaped glasses? Do those calf-high army boots make her look hot? Who cares? She's a smart cookie who comments on her world with steely precision.

Dilbert (Mon., 7pm, KVC/UPN): Life in hell for the white-collar worker. The more outlandish the predicaments, the more insipid the boss, the more annoying the coworkers, the more drunk-with-power the computer support staff, the truer to life Dilbert is -- painfully true.

South Park (Wed., 9pm & 12:30am; Sat., 9:30pm & 1:30am, Comedy Central): Foul-mouthed children, a gruesome death for little Kenny at the end of each episode, a school cafeteria cook prone to sexually suggestive ditties (deliciously voiced by Isaac Hayes). Yer git to go wid dat! The crude animation only adds to the gleefully irreverent pokes and prods South Park has taken at religion, suburbia, same-sex relationships (Kyle's dog is a homosexual), and parenting.

The Simpsons (Sun, 7pm; weekdays, 9pm, Fox): Where to begin? The Simpsons has taken jabs at so many institutions that it's hard to identify just one. Episodes are never overtly dedicated to an issue or a cause, but asides and visual humor are often loaded with social commentary. The episode where Marge treats nuclear power plant owner Mr. Burns to a taste of his own destruction in the form of a three-eyed fish from a river polluted by his power plant is a winner.