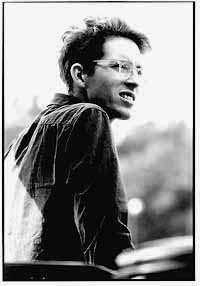 Wes Anderson seems content justto make small talk about the University of Texas philosophy department. "Is Allaire still there?" he asks as he tries to remember as much as he can about some of the Austin faculty under whom he earned his undergraduate degree. "Hochberg? Is he the guy with the curly hair and he's kind of tubby; and he's sort of funny?" It's not a particularly flattering description, and it fails to mention the professor's near obsession with Bertrand Russell, but it's accurate nonetheless.

While the 29-year-old Anderson is indeed a product of the 40 Acres, he is not waxing nostalgic as much as he is trying to delay or even avoid talking about his new movie Rushmore. "We can glance off of it," he says before confessing, "The more we can talk about other things the better."

Rushmore is the second feature film to be directed by the UT grad. (Anderson co-wrote Rushmore and his earlier film Bottle Rocket with writing partner and fellow UT alum, actor Owen Wilson). Rushmore is the minimally autobiographical story of prodigy schoolboy/playwright Max Fischer (Jason Schwartzman) and the past-middle-aged wealthy alum/industrialist Mr. Blume (Bill Murray) who both fall for the same woman/teacher (Olivia Williams) at Rushmore, the private academy that Fischer attends. (Rushmore was filmed on the campus of Anderson's high school alma mater, St. John's School in Houston, Texas.) However, the movie is not a love story as much as it is a comedy of personalities. And it is not comedy as much as it is an exceptionally inventive piece of filmmaking. With the attention the movie has already generated (Rushmore has figured prominently in a host of top 10 lists of 1998 -- the film was released for a week in December in New York and Los Angeles to qualify for an Academy nomination), Anderson is in demand. Following an East Coast publicity binge that had his daily calendar double-booked on occasion, Anderson understandably sounds a tad worn out and is a little loath to spend too much more time talking about his film. That's the price of being fabulous.

When Anderson does finally allow himself to talk about the movie, it becomes apparent that he is some combination of incredibly lucky and incredibly smart. What works so well onscreen might never even have had the chance to happen because, like its predecessor, Anderson's small-scale and endearing Bottle Rocket, Rushmore is not rife with the elements that typify Hollywood moviemaking.

The principle story itself is farcical in a way that defies convention. The characters are not all beautiful -- striking definitely, but not beautiful. The jokes are rarely the result of dialogue punch lines and are instead layered inside the subtlest of details. And the soundtrack lacks a power ballad by the Goo Goo Dolls or Whitney Houston to bolster cross-marketing efforts. Instead, it features some relatively obscure British Invasion-era Stones ("I Am Waiting"), the Who ("A Quick One While He's Away"), and the Kinks ("Nothin' in This World Can Stop Me Worryin' 'Bout That Girl"). Furthermore, as a Touchstone Pictures film, this quirky, R-rated movie is ultimately a product of the family-friendly Walt Disney Studios.

Even Anderson's first film, Bottle Rocket, which has the same irreverent feel as Rushmore, was bankrolled by big-time producers Polly Platt and James Brooks of Gracie Films, which is the same company behind As Good as It Gets, Broadcast News, and TV's The Simpsons. Bottle Rocket was distributed by giant Columbia Pictures.

Somehow Anderson has not only gotten to make movies inside the system, but he has also found himself in the enviable position of having the type of creative control usually reserved for bankable names. This from a guy who most people have probably never heard of.

On giving in to compromise or making purely commercial concessions, Anderson speaks rather plainly. "I just don't open myself up to those discussions," he says. "I just try to create a situation where I'm very clear with everyone up-front what my plan is. And I try to make it so everyone knows where I'm going, so that if somebody were to say something about like one of the songs, I could say, 'As you can see in the memo dated February 1, we have always intended to use this music and that's the way I want to keep it.' That obviously doesn't really protect you, but I didn't have any interference and that's the way it ought to be."

Obviously. So it was either incredibly shrewd of Anderson to take that tack or incredibly stupid, because save for adherents to Stoic philosophy, which Anderson didn't specify whether he was or not, the way things ought to be and they way things are are two very different things, and the difference is probably even greater in L.A. That's where some form of luck must have come in handy, as after having plenty of leeway at Gracie Films, Anderson was fortunate to end up in another favorable situation.

"I think it has a lot to do with the fact that we went to the head of the studio," he admits. "He [Joe Roth] was the one who wanted us to do this movie there. So we were operating under his umbrella and with his protection and what he brought us in to do was do our own work. He knew it was kind of a peculiar movie and needed to be left on its own. And I'm always very clear with people as to what I want to have happen, and I take it for granted that people understand that I ultimately have a feel for the movie and a better feel than anybody else is going to have. Owen [Wilson] and I wrote it and I've been preparing it all this time. It's my thing."

As such, the movie has Anderson's hands all over it, but the resulting "thing" consistently shows some pretty deft touches. Chief among them is the casting, especially the male leads, with the younger role being played by Jason Schwartzman and the elder by Bill Murray. Murray's subtle performance has earned the comic actor some of the best notices of his career, and he has been nominated for some of the year's top acting awards. Notes Anderson, "Bill brought something special to everything. He just has his own way of moving. His eyes do things no one else's do. And he's always surprising you with little things. And he also brings a sadness that is very right to the character."

Better than Murray -- and an absolute revelation -- is Schwartzman as the brash and ambitious Rushmore student Max Fischer. And although Schwartzman is the son of actress Talia Shire (and nephew of Francis Ford Coppola and cousin of Nicolas Cage), he landed his role in this project through very ordinary channels. According to the director, "He just came in and auditioned. Our casting director in San Francisco sent him to me and I thought he was perfect. We just sort of set to work right there."

Even the aforementioned soundtrack is largely Anderson's doing. And it's no accident that it's Mick and Keith and Ray and Dave, and not Celine Dion. "I kind of accumulated the songs that I wanted to use and developed scenes from different pieces of music; so it was always in the plan." says Anderson. "To me that's part of the writing -- figuring out the songs. It's something that I do very early on."

The difference between realizing a vision and being a control freak may only be a subjective distinction, but while Anderson is fortunate enough to be in control, he does not exercise it to his own detriment. For the making of Rushmore everything just worked. Or so he says. Asked whether he was the type of person who has the movie shot in his mind before he even gets to the set or if he is more apt to just see what happens, Anderson replies, "The latter, except that in this particular movie it tended to be the former. I'm open to whatever. I want anything to happen, but the plan tended to work on this one and tended to be what we went with.

"I'm open to all kinds of stuff. And I'd like to be the guy who says, 'Let's just figure it out.' But the way I usually do it is I say, 'You stand here and you stand there and you go over here, and we move here and the camera's gonna do this and you're going to go over here.' But the reason I do that is that I try to stage it in such a way that they are going to have fun moving around and there's going to be some ideas in the blocking -- something to make it interesting and to help with the way the scene plays and to help the actors."

The success of that approach in this instance speaks for itself, which is good because it's that much less that Anderson has to say on his own behalf. And given the filmmaker's low-key profile in the city in which he attended college, perhaps talking about himself just isn't something Anderson likes to do.

In a town whose arts community often holds liberal, and almost ridiculous, criteria for inclusion -- "What? You were stranded here for a couple of hours when your car broke down? Hey, that makes you an Austinite" -- Anderson hasn't been canonized. He isn't even conspicuously enshrined in the hall of he's-one-of-ours. And his isn't exactly the first surname that pops to mind after those of Linklater and Rodriguez and Judge.

Part of it may be because Anderson doesn't live in Austin anymore. He doesn't even live in Texas anymore. He has moved to L.A., where he shares a place with Owen and Luke Wilson. In addition to being Anderson's writing partner, Owen Wilson is an actor (Anaconda, Armageddon), as is Luke, who appears as Dr. Peter Flynn in Rushmore and is also the butt of one of the movie's best lines. Moreover, Anderson professes a preference for New York, where he is "trying to spend more time." The other part may be that Rushmore is only Anderson's second film. So the fact that you haven't heard of him only means you haven't heard of him yet.

Still, Anderson and star Jason Schwartzman intend to make an impression on Austin this Friday, February 5, when they park their big yellow schoolbus at 24th and Rio Grande between 3:30-6:30pm. The duo have been on a coast-to-coast publicity tour in the bus, stopping in a dozen cities along the way. Austin is the next to last stop ... almost home.