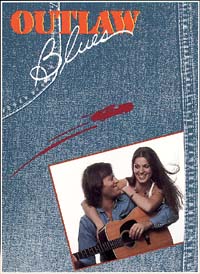 It's disconcerting to watch your past on television. For many, it's the twinge of nostalgia while watching a rerun from childhood or a long-forgotten cartoon. For me and the scores of Austinites who have braved long days on film sets as extras, it comes unexpectedly whenever Roadie or Outlaw Blues gets shown. It's not just the coldwater-in-the-face realization of how long ago it was, but the sweet tug at the heart remembering the way we were -- turquoise jewelry and all.

If I had nickel for everyone who has asked me about Outlaw Blues (1/28, 5pm; 1/29, 6am ENC) this week, I could buy the rights to the stupid film and ensure it never gets shown again -- it's been running on TV lately. But what I heard the most was not about the film, it was, "Is that what downtown really used to look like?" Oh yes. It is.

I wouldn't call those Seventies a kinder, gentler time, I would call it the calm before the storm. It's not that those years didn't see unrest -- we had suffered through the oil crisis, Watergate, inflation, the gas crisis, and the Bee Gees. It was a compressed decade -- the Sixties weren't really over until Nixon's resignation and the Vietnam War ended, and many people were still shell-shocked from the Sixties. Is it any wonder so many of us threw ourselves into the hazy daze of the Armadillo?

When it was announced that Outlaw Blues was filming in Austin in mid-1976, the hip community was a-twitter. Peter Fonda was still a genuine counterculture hero coasting with Easy Rider (and underrated for The Hired Hand). Susan St. James had just left NBC's enormously popular McMillan and Wifeseries -- you know this is the Seventies, her co-star was Rock Hudson. The film's predictable plot -- talented con has his song fleeced by a no-good established country star and mayhem ensues -- wove in elements of the cosmic cowboy scene via locales like Soap Creek Saloon and the Split Rail.

It's not much of a film, but its depiction of Austin's cosmic cowboys is pretty much the way I remember it. Locals like Steven Fromholz and Playmate Janet Quist got plenty of screen time, and when it came time to cast those inevitable club scenes, the staff of The Austin Sun was invited to fill the frame. That's where I was working then, younger and greener than I care to imagine, and it was the most exciting thing that had ever happened to me.

About 20 of the staff (including my then-editor Jeff Nightbyrd, columnist Michael Ventura, and sportswriter Bigboy Medlin) went down to Soap Creek Saloon to play clubgoers in the scene where Bobby Ogden (Fonda) performs with Greezy Wheels and then makes a run from the cops, who bust into the club. We had to show up in the morning for this scene; some might have seen the club by sunrise, but few of us recognized it during the day. Inside, it was business as usual, with Billy Bob Saunders at the door and the usual suspects bartending. The Pearl beer was flowing free and a production assistant ran around passing out cigarettes. "We want it really smoky!"

Since Greezy Wheels mimed playing but Fonda didn't mime singing, it was truly boring and anticlimactic. We sat there for hours as first this angle and then that one was shot, but finally the big moment came and the cameras were turned on the crowd as the cops came busting in. We were instructed to look around and point every which way to confuse the cops. Fidgety, drinking, and stoned, we were more than happy to comply, and at some point, the camera zoomed on my face. It was glorious to see.

Roadie didn't just use Austin as a background, it played on its musical sensibility and is arguably the prototype Austin slacker film. Medlin and Ventura had written the screenplay for it based on Travis Redfish, a fictional character from Medlin's sports column in the Sun. In the paper, Redfish was merely a philosophical, sports-lovin' seat-warmer at the Hole in the Wall. In Roadie, he became -- ta-da! -- a philosophical, sports-lovin' roadie.

Woo hoo! It was the high days of punk and a cold February. Nightbyrd asked me to round up some of my punk friends for the club scene taking place at L.A.'s Whiskey A Go-Go. Really, it was being filmed at Club Foot, which did remarkably resemble the Whiskey's multi-level interior. Although Meat Loaf and Art Carney weren't as famous stars as Fonda and St. James, the cast included Alice Cooper and Blondie and Alan Rudolph directed it.

The Standing Waves were performing as "Spittle." I was loafing betweens scenes on the club's bottom level with the Huns' Phil Tolstead and Chickadiesels' E.A. Srere when someone tapped me on the shoulder and I turned around to see Alan Rudolph motioning me to follow him. "Stand here," he said, and wandered off while three or four people buzzed around me setting lights, etc. for the next 45 minutes. That's how I got to open the scene at the Whiskey in Roadie.

Unfortunately, I was too memorable for the casting director, who saw me as an extra a few days later at the festival scene with Blondie at Manor Downs. "Oh no!" she shrieked, and literally pulled me out of the crowd shot. "You can't be here! This is Idaho, and you were in Texas!"

Honeysuckle Rose with Willie Nelson and Amy Irving started filming here a few weeks afterward, but I passed on being an extra for it. In retrospect, that was a stupid decision -- Honeysuckle Rose was uneven, but the concert footage is sublime. Of the three films, it's the least embarrassing (except, notes my film critic officemate, "that scene with Dyan Cannon and the whipped cream") and the only one I can conscionably suggest watching for. Tape Outlaw Blues for a hoot but avoid Roadie unless desperate.