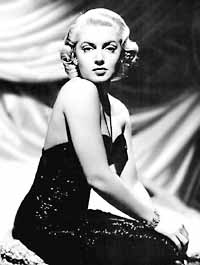 There are better act-resses, certainly. There are bigger stars, and probably more beautiful faces than hers. But is there any question that Elizabeth Taylor will always be one of Hollywood's biggest, brightest stars?

Taylor came from a time when movie stars were created, only she was so perfect from inception that she didn't need to have her name changed, her background reinvented, her haircolor changed, or her nose cut. She came to Hollywood as a child and became a star, a Cinderella never as troublesome as her MGM stepsister Judy Garland. And yet as she bloomed into breathtaking youthful beauty before the camera, Taylor's offscreen life seemed strangely unfulfilled. Her marriages would all end in divorce or tragedy. Her health was mysteriously erratic, and her film career ... well, even with two Oscars, "uneven" is a kind word.

"Uneven" also covers six decades of acting onscreen, and in that period of time the clunkers are bound to outweight the triumphs, but is that any reason for TCM to offer up a half-hearted body of work for their "Star of the Month"? With Taylor's repertoire, there might have been many themes -- Young Liz, Liz With Animals, Fat Liz, Liz in Costume, Sixties Liz -- but TCM seems to have chosen Mediocre Liz as their theme. What about those films in which Taylor transcends her roles -- A Place in the Sun... Giant ... Who's Afraid of Virginia Woolf? And why designate "of the month" if it's only a week? It seems abrupt to end her reign on Saturday the 23rd -- maybe "Star of the Week" is more appropriate.

To their credit, TCM does run Taylor's films in approximate chronological order to save us the trouble of trying to guess how many years lapsed between girdle sizes. Taylor has notable performances in her career, but you'd never know it by this lineup. With all her animal and teen-date movies out of the way earlier in the week, Thursday's lineup picks up in the mid-Fifties with a so-so piano drama Rhapsody (1/21; 7pm), and is followed by the costume showcase Beau Brummel (1/21; 9pm) and an overblown The Last Time I Saw Paris (1/21; 11pm). Too young to have been in Gone With the Wind (though considered to play Bonnie Blue Butler, Taylor donned hoopskirts and sausage curls for 1958's Raintree County (1/22; 1am), even though it had the same is-she-or-isn't-she-black theme as Band of Angels from the year before.

The best night of the TCM lineup is Friday, with Cat on a Hot Tin Roof (1/22; 7pm), which stars Paul Newman plus the Best Use of a Slip Onscreen ever. This adaptation of a Tennessee Williams play may also be Burl Ives' best role ever. (The first time I saw it, it sent me running to the dictionary. What in blazes is "mendacity"?) In another Tennessee Williams screenplay, 1960's Suddenly Last Summer (1/22, 9pm) Taylor stars with Katharine Hepburn, and Montgomery Clift for the third time. Not wholly successful as a film, but certainly an intriguing performance. And Taylor won her first Oscar playing a prostitute in Butterfield 8 (1/22, 11pm), hardly an acting triumph but one of her most notorious roles. 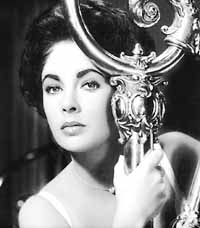 The V.I.P.s (1/23; 7pm) kicks off the final night of the Taylor tribute, forgoing the opportunity to show the scandalous Cleopatra in favor of this deadly dull tale of overprivileged socialites delayed at Heathrow Airport. Not gripping. And The Sandpiper (1/23; 9:30pm) is pure corn as then-husband Richard Burton plays an Episcopal priest hot for bohemian artist Liz (yeah, right). Even less memorable is Reflections in a Golden Eye (1/23; 11:30pm), a murky tale of sexual obsession in the military starring Marlon Brando and directed by John Huston. Finally, The Comedians (1/23; 1:30am) was a joke to begin with, another cast-of-thousands vehicle for the battling Burtons and a truly lame offering with which to wrap the decades of the star's work.

La Liz wasn't the only MGM sex symbol. The young and tempestous Lana Turner studied at the studio's Little Red Schoolhouse (while Mickey Rooney studied her) as she was molded into the original "Sweater Girl" for her debut in They Won't Forget.

They didn't forget, and neither will you after you see Turner strut across the screen in those white shorts and turban in her tour de force, The Postman Always Rings Twice (1/25, noon). John Garfield plays her lust-besotted lover in this adaptation of James M. Cain's noir novel. (Postman was remade in 1981 with Jack Nicholson and Jessica Lange, proof that body parts and explicit sex scenes don't make for a better film.)

This particular showing of Postman is followed by 1996's Becoming Attractions: Lana Turner (1/25, 2pm), a collection of movie trailers documenting her rise to stardom. Turner's films -- never a threat to anyone's thespian aspirations -- had become pure fluff by the end of the Fifties but that was mostly because Turner's biggest role turned out to be her unscripted performance in court after daughter 14-year-old daughter Cheryl Crane stabbed Lana's mobster boyfriend, Johnny Stompanato, to death. (This incident was forever referred to by Turner and Crane as "the paragraph," because it was included in every news report on Turner for the rest of her life. The scandal was fictionalized for screen in the Sixties potboiler Where Love Has Gone.) For my money, the four-hanky soap weeper Madame X is Turner's best role, though Imitation of Life is curiously defining also.

Elizabeth Taylor and Lana Turner. In these past glories, they shine with no beginning or end, just the luminous radiance of star power.