Have Yourself an Animated Christmas

Tweet
print
write a letter
"The challenge," a reader named Mike wrote in to me, "is to spend one day during the holidays watching nothing but animation. The catch is that you can't just leave your TV on the Cartoon Network, rent videos, or watch previously taped programs."

Whee! Chunk that marathon of Blondie movies (AMC) and the all-day run of A Christmas Story (TNT) right out the window, I choose Christmas day! And the Cartoon Network rolls out the red carpet with its 24-hour barrage of cartoons beginning Christmas Eve.

I'll be kind here and start at a reasonable hour withAnastasia(9:15am, HBO), the non-Disney animated film that came out last Christmas and features the voice of Meg Ryan. In true adaptation form, all attempts to be accurate have been rejected, saving it from any historical integrity in favor of perpetuating the notion that the Russian princess survived execution. (Also, be grateful I start this late, thus sparing you Babar [6:30am, HBO], Ducktales [7pm, KNVA] or Casper's Christmas[8:30am, TOON] this early in the day.) Disney lovers, please note that The Rescuers Down Under (10:40am, DIS) is also scheduled.

Serious cartoon watching gets underway with What A Cartoon Show! (11am, TOON), which is much better than the Road Rules Marathon (11am, MTV). Harveytoons (11:30, FAM) follow, then flip to Looney Tunes (noon, NICK). Alternately, The Jetsons: The Movie (noon, SF) and The Jungle Book (12:05, DIS) will vie for your attention.

In fact, let's hope you watch Jungle Book or The Jetsons because the pickings get a little slim in the early afternoon. You're on Nickelodeon, Charlie Brown!(1pm, NICK) could easily send you to watching the classic A Christmas Carol (1pm, AMC) but 30 minutes later, you can choose between Tiny Toon Adventures(1:30pm, NICK) and First Look: The Prince Of Egypt (1:30pm, HBO). Let's break at 2pm because Great Empires: The Republic of Rome (2pm, HIST) is on and I can't recommend Capt. Planet (2pm, TOON), even though Darkwing Duck (2:30pm, DIS) follows.

What more perfect timing than to find Who Framed Roger Rabbit? (2:55pm, WTBS) on the schedule? Frankly, I always thought this film was just a tad manic but the cartoon in-jokes are utterly priceless. Plus, it's long enough to keep you from having to watch New Batman/Superman (4pm, KNVA) -- unless you're a fan. The late afternoon choices get sparse, too. There's Batman (5pm, TOON) and Beetlejuice (5:30pm, TOON), then Doug (6pm, NICK) and Rugrats (6:30pm, NICK).

For the evening's pleasure, The Many Adventures of Winnie the Pooh(7pm, KNVA) features three animated shorts about the Bear of Very Little Brain and his cohorts, and Dr. Seuss' perennially popular How the Grinch Stole Christmas: Special Edition (7pm, TNT). Reminder: if you think this is a bad idea, please note that alternate viewing includes It's a Wonderful Life (7pm, KXAN), Ben-Hur (7pm, TCM), and another one of those boo-hoo The Waltons marathons (TNN). 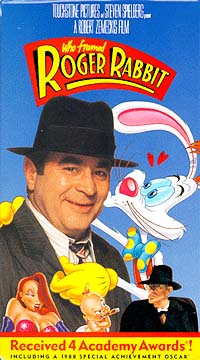 I liked Mike's qualification about not leaving the TV on the Cartoon Network all day long. Most of what is scheduled on the channel is crap, but occasionally some of the old fun will sneak out on shows like Tex Avery Show (9pm, TOON) and ToonHeads (9:30pm, TOON). Let's take a moment to give Cartoon Network big points, though, for O Canada (Sundays, 11:30pm) and the exemplary Late Night Black & White(Sundays, midnight), where I can indulge my Fleischer Brothers-Popeye obsession to its fullest. This leads us to to the Beavis and Butt-head Christmas (10pm, MTV), with a nod to the regularly scheduled Space Ghost Coast to Coast(10pm, TOON).

It's an hour before midnight Christmas night. You may wish to take another break. I recommend The History of Toys and Games (11pm, HIST) over Gumby (11pm, TOON) but then I would recommend cross-breeding turtles over watching Gumby. I suggest a 30-minute break here because the final portion of this challenge will require the suspension of all intelligence, as yet another Beavis and Butt-head Moron-athon (11:30pm, MTV) takes place until the wee hours of the morning.

Next column, we'll hit some of those silly cartoon lyrics again.

Apropos of nothing, I am giving that Dog & Duck Pub TV commercial my own personal Worst Austin Commercial of 1998 award, but I do so with great affection since I am a regular there.

The commercial runs late night on A&E when I am looking for Chris Noth in those Law & Order re-runs (note the subtle use of the actor's name for the second week in a row hopefully buying me some goodwill with him) and portrays "typical" scenes in the pub of folks chitchatting inside, throwing darts, sitting in the beer garden, and snapping their fingers to the jukebox.

Although D&D is a "limey pub," as my friend Liam gripes, both the Gaelic League and the Celtic Association hold their meetings there, not to mention that the Silver Thistle Pipes and Drums Band plays there every Friday. Still, there's nothing like the version of the commercial where Wannabe Hunter Darby looks as if he is receiving signals from outer space and SXSW consultant Steve Chaney is rocking out at the jukebox. All this would be campy fun except for the music! Gads, where did they come up with that chirpy crud? Couldn't they have fleeced some English folk song or had Two O'Clock Courage write something?

Ah well. Draw me another Harp.