Too Much Monkey Business?

Richard M. Lewis is somewhat surprised to be describing himself as a high-concept documentary filmmaker. Make that an "animal" high-concept documentarian or -- to put an even finer point on it -- a "primate" high-concept documentarian. Two of the University of Texas' film production prof's monkey docs, "The Snow Monkeys of Texas" and "Chimp Rescue," will be screened for the Texas Documentary Tour at the Alamo Drafthouse on Wednesday, December 2. This is not exactly what he had set his cap for when he left UT in 1991 with an MFA and a thesis film tucked under his arm to seek his fortune in fiction film.

That thesis film, "Born Wild," his first animal doc, about the exotic animal pet trade, got made because he was short of funds and loath to do a fiction film on video. The idea came from a newspaper account of a guy in South Austin with a pet tiger he wanted to get rid of. A fortuitous intersection with someone with National Geographic contacts during his first L.A. editing job resulted in a run of "Born Wild" on National Geographic's Explorer on the Turner superstation, TBS.

NG wanted more and high-concept was their cup of tea. Snow monkeys in South Texas certainly seemed, at least to Lewis, sufficiently oxymoronic to hardly require a pitch but, surprisingly, he had to wait five years to find a story editor there who got it. The 23-minute film follows the round-up of 150 Japanese snow macaques who had worn out their welcome in their native mountain habitat near Kyoto, Japan and were rescued by primatologist Lou Griffin -- the "Jane Goodall of Texas" -- who resettled them en masse in South Texas. Of course, transplanting monkeys that were used to bitter high-altitude winters and turning them loose amidst the hardscrabble and tumbleweed of Dilley, Texas, and the brutality of the Texas sol and native rattler population makes for a rather humorous immigrant parable. Have that story narrated in Sammy Allred's twang, throw in a made-in-Texas soundtrack, and a hokey surprise cameo by Wayne Newton, and you have a National Geographic winner. And a terrific primate doc.

More high-concept primate fodder fell into Lewis' lap when a sanctuary owner in San Antonio, who had appeared in "Born Wild," called to say he had met the "Schindler of Chimps" at an NYU animal lab. Lewis likes documentaries with "a beginning, middle, and an end, something at risk, some drama, and some strong characters -- good guys, bad guys." "Chimp Rescue," the second in his monkey series, has all of that and an appearance by the real Jane Goodall, as well. It's about James Mahoney, the "good guy," conflicted animal researcher at an NYU lab who learns that his lab has been slated for closing, his laboratory chimps to be surrendered to one Dr. Fred Coulston, the owner of a New Mexico facility with a questionable reputation for animal care. Mahoney decides that he can't abide this fate for his chimps -- they've worked hard and deserve a comfortable retirement. He surreptitiously arranges for alternative placements at various hand-picked sanctuaries around the country and in Canada and we follow him as he personally transports his chimps to safety. Mahoney will be at the Alamo screening.

Lewis has one more monkey movie in him before he moves on and up the food chain. This one -- gotta love it -- he conceptualizes as the Free Willy of chimps, featuring the San Antionio sanctuary owner as ... the "Horse Whisperer of chimps." This film will bring us full circle from the snow monkeys removed from their Japanese habitat and relocated, more or less successfully, to the Watermelon Capital of the World in South Texas, and the lab chimps, born and bred in cages but, at some point no longer useful for medical research, cast aside. So what to do with them? Where shall they live out what might be a life-span of 50-55 years? They can't just be set free in the woods. (As Lewis explains, an adult chimp is 4-5 feet tall, weighs 120-150 lbs., has the intelligence of a three or four-year-old child, and five times the strength of an adult: "Imagine what a three-year old child like that could do to you when he threw a tantrum?") Hence the problem with the existing chimp surplus we now have because chimps were overbred for AIDS research. (It turned out that chimps don't get AIDS, though they do become HIV-positive.) The third NG film in Lewis' primate trilogy will explore the viability of returning chimps born and bred in captivity to their native habitat. Will they possess or can they learn the skills necessary for survival? "If they can manage," explains Lewis, "there are lots of national forests in Africa, depleted of chimps by poachers, where they could be released. On the other hand, they might just sit on the shore waving at the boat to come back and take them back to their cages." 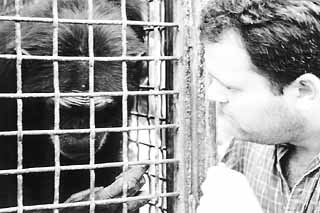 Austin Chronicle: After all of this monkey work, you've probably become quite the "chimp-whisperer" yourself. What are monkeys like in front of the camera?

Richard Lewis: Well, they don't take direction very well. So you end up begging, "Please walk over there now; please jump in the pond now." As soon as you set the camera up, it's time for a nap and you can sit around for two weeks before they'll decide to go swimming again. You can nudge them with peanuts but you can't touch them. Monkeys have their own rules: They can touch you but you can't touch them. They'll come over to you -- they stand about waist high -- and put a hand on your thigh for balance, but it's not affection -- they're looking for food.

AC: What about that scene where the monkey bites Lou on the ankle, requiring stitches?

RL: That bite was the first time that had ever happened to Lou. As a filmmaker, you can't get too much luckier than that -- to have a monkey bite someone on camera. Of course, it wasn't so lucky for Lou. National Geographic was very happy with that scene.

AC: So what's it like working for National Geographic?

RL: We have our disagreements but they treat me well and pay reasonably well. Our creative instincts are frequently at odds and I hate to lose those kinds of battles. An example was in "Snow Monkeys": My original concept was to feature Lou Griffin -- the "Jane Goodall of Texas" -- more prominently in the story; she's a real character. I lost that one and so the film is kind of a light-hearted piece that's really fun but it could have said a lot more.

AC: But, there is that travel perk, working for NG, isn't there?

RL: People always ask me that because that's what working for NG is all about, right? I always say I get to travel a lot but barely ever leave Texas. That footage of the snow monkeys in Japan was NG stock footage. I lobbied hard to go to Japan, told them that no stock footage of theirs could possibly rival what I could shoot and they said, yeah, right. For "Chimp Rescue," I traveled to Louisiana, Montreal, California, New Mexico, and New York, basically following along as the chimps were transported from place to place. In fact, I always say my true specialty is not primates but primates-in-transit. If you want to move monkeys, I'm your filmmaker.

AC: What was it like working with Jane Goodall?

RL: She gets so many requests to be in films it's almost like, okay, just plop me down in front of the camera and I'll do my spiel. I was really impressed with what a great sense of humor she had. She would laugh at the things that Fred Coulston would say about her. He, on the other hand, certainly did not laugh at what she said about him; she's always thwarting his attempts to get his hands on chimps.

AC: What was the most satisfying aspect of the "Chimp Rescue" project?

RL: Getting to know Jim Mahoney. He's the closest thing to a saint I've ever met. When he collapsed in the middle of the film, I was devastated -- not as a filmmaker but as a friend. He puts his neck on the line. At some point, he had to pick between his career and the chimps and he chose the chimps. His contract with the NYU lab expires at the end of this year -- it won't be renewed -- and he doesn't know what he will do. He doesn't know if he has the emotional wherewithal to continue the animal research.

AC: Has your opinion of animal research changed as a result of your film?

RL: Going into this film I didn't like the idea of testing on chimps; now I'm against it. I've come to agree with Goodall's thinking, which I think is that, she sees the need for it -- her mother benefited from animal testing -- but she thinks that the harm and pain to animals should be mitigated as much as possible and we should do what we can to minimize the number of animals used. And she still questions the need for testing on our closest relative, the chimp. I don't lose any sleep over rats, as hypocritical as that may sound, but after spending time with chimps, it's scary how close they are to us. Anybody who doubts evolution should just go spend some time with chimps. They're too close to us and when you see how their minds work and how smart they are, it's just not right to keep them in cages for decades. I think it costs us as a species to do what we do to them.

"Snow Monkeys of Texas" and "Chimp Rescue" will be presented as part of the Texas Documentary Tour on Wednesday, December 2 at the Dobie Theatre, at 7 & 9pm. (Please make a note of this month's venue change.) Admission is $5 for the general public; $3.50 for Austin Film Society members and students. Richard Lewis and James Mahoney will introduce the films and conduct a Q&A session after each screening. The Texas Documentary Tour is a co-presentation of the Austin Film Society, the University of Texas RTF Dept., The Austin Chronicle, and SXSW Film. Chimp Rescue also makes its television premiere on National Geographic Explorer on Sunday, November 29, 6 & 10pm (CST), on TBS.