The Making of Olympia 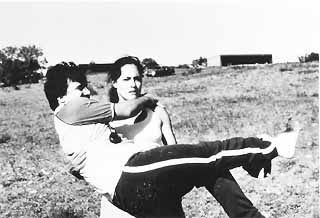 I got involved with Olympia for two reasons: love and money. I loved the filmmakers, I loved the film's characters, and I loved the idea of being involved in making a movie. And -- my children grown, my mid-life dental work done -- I had money to play with.

Olympia's writer-director, Robert Byington, had been a graduate student of mine in American Studies at the University of Texas. I was surprised when one day in 1992 he told me he'd grown tired of analyzing art and was going to make some. "I'm going to make a movie," he said.

"Just like that?" I thought. But I smiled and nodded in empty-headed encouragement.

When Bob did make a film, Shameless (1994), I wasn't much involved, though he cast me as a professor lecturing about chaos, grief, and urbanism. I liked Shameless; it received an NEA grant and got excellent reviews here (The Los Angeles Times liked the film's "highly personal, distinctive and unwavering vision") and in Europe, where it won the Audience's Favorite Film Prize at the Mannheim International Film Festival.

Two years later, Bob sent me an uproarious short story ("Javelkemeiche!"), which would evolve into Olympia's script...slowly. Bob didn't have an ending for the film that he or anyone else liked. At his invitation I tried doctoring the script. He had given me bold and quirky characters to work with, and he liked some of my suggestions, though he thought the end of my ending too romanticized.

"But it's a romantic comedy," I protested. "But of the Nineties," Bob said. "Which means not necessarily romantic. And not necessarily funny." (The Variety reviewer Len Klady later commended Olympia's ambiguous tone when he wrote of the film's combining "goofball situations and serious themes to disarming effect.")

Once a few of my words were in the script, I was hooked. I wound up not only helping write Olympia, but investing in it, and playing a small role -- not a professor this time, but a crazed thug in a hotdog costume.

In the spring of 1996, a drove of people worked in my house-turned-production office, laying plans, interviewing and hiring, soliciting money, locations, props, food. It was a chaotic time, filled with worry, disputes, and soul-searching about our financial condition and the script.

In contrast, the filming itself, that May, was placid and professional. Our lead actors came from New York, L.A., and Houston. Half the crew of 25 were Austin professionals; half were volunteers, mainly from UT's film program, learning by doing. Nearly everyone but me was under 35 and worked 12-14 hour days, often in heat over 100 degrees, with never a murmur of complaint.

There were no fist fights, no shouting arguments, no affairs that hadn't already been ongoing, no broken friendships, and only two accidents. For reasons unnecessary to explain, the second assistant director cut his leg with a hatchet. I drove him to Brackenridge Emergency, deeply relieved that the injury was minor and that we had accident insurance. Our production truck also drove into a tree and ripped its top -- minor damage, also insured.

Bob and I transferred the dailies to video in Dallas. Then he took the tapes to Los Angeles for the editing. This took 14 months and included the painstakingly tedious process by which the format we shot in, Super-16, is "blown up" to 35mm. We had a Dolby SR sound mix donated, and premiered the film last January as the Closing Night Film at the Slamdance Film Festival in Park City, Utah. We also showed Olympia as part of the Opening Night festivities at this year's SXSW Film Festival and at the Taos Talking Pictures Festival. Last month, we won the Grand Jury Award at the Long Island Film Festival. In late November we take the film to London for its European premiere. Friday it opens at the Dobie Theatre in Austin.

My Olympia involvement taught this old dog new tricks, and I here offer nine suggestions for those who consider either producing or investing in an independent film:

1) Work with a writer-director who has a good script with strong characters. Said writer-director must (a) have made at least one earlier film, short or long, that you like and that shows the ability to tell a story and put lifelike people on the screen; (b) be not only talented but frugal and honest; and (c) know production crew people who do high-quality work at reasonable rates.

2) Never forget: A sad film has to be really terrific to attract an audience. As Oscar Wilde said, life isn't happy; fiction is -- that's how we know it's fiction. My chief struggle was to make Olympia's end as happy as I could.

3) Hire professional actors who have done work your writer-director and you love. In general, professional actors do much better work than amateurs, and most of them are so grateful to work that they work cheaply. The Screen Actors Guild has an enlightened contract that permits low-budget films to hire professional actors for little up-front money. Our lead actors, Jason Andrews (Rhythm Thief), Damian Young (Amateur), and Carmen Nogales (Shameless) give Olympia a calm authority it wouldn't have had had we hired friends and acquaintances to play the roles.

4) Hire a professional director of photography whose work you and the writer-director like. Our DP, Paul Kloss, won praise for his work as DP and relentless cameraman on Hollywood Madam: The Heidi Fleiss Story. Also, get the best sound recordist you can; we got Mac Melson, the best in Texas. Many independent films go cheap on the sound. A mistake! Audiences will accept odd, jumpy images, but not bad sound.

5) Don't shoot outdoors at night unless you want a dark, neo-documentary look. An independent film can't afford the lights necessary to make outdoor night scenes look anything other than menacing.

6) Don't have the writer-director edit his or her own film. Make him or her work with an editor whose work the writer-director likes, and who, again, is experienced. Our editor, Garret Savage, had edited commercials and film trailers and was ready to move up to a feature. He worked tirelessly and selflessly to make Olympia the best it could be.

7) Don't invest in a movie thinking you will make money. Hope you will, and work toward that end. But be financially and psychologically prepared to accept a loss. When I told the film writer-producer Bill Wittliff that I was going to put money in a movie, he said, "Bill, why don't you just buy a convertible and throw the rest of the money out the window?"

8) Get the community involved in the filmmaking. Everyone wants to be in a movie. Restaurants and local businesses -- often not the national chains -- will give you help if you thank them in the credits.

9) Shoot in color. There's no longer a market for black-and-white films that are less than staggeringly brilliant or by well-established directors.

Film is a social medium; unlike the novel, it is not one person's creation. A culture where the young aspire to make movies is, I would argue, healthier than one that encourages the fabrication of private fictions. Such fictions, as the careers of Dostoyevski, Tolstoy, Hemingway, Faulkner, and Steinbeck suggest, often lead to madness and alcoholism.

I'll always wish I had gotten into films 35 years earlier than I did.

Bill Stott has taught American Studies and English at UT since 1971, and is a major investor in Olympia.

Olympia opens on Friday, Nov. 13 at the Dobie Theatre.