The Abreasted Development of Russ Meyer

Tweet
print
write a letter
The X-rated king of softcore sex films, Russ Meyer, looking very much the part, sat talking at the table at Casita Jorge's with Francesca "Kitten" Natividad at his side sometime during 1979. He was holding forth to a group of Austin film critics, including Ed Lowry, John Bustin, Patrick Taggart, Marjorie Baumgarten, and myself, about Beneath the Valley of the Ultravixens. At the time, no one realized that Ultravixens, Meyer's latest movie, would be his last major theatrical release, his two-decade reign of the softcore genre coming to an end. Meyer's teasing, two-fisted, violent melodramas and/or slyly satiric, bawdy soap operas worked best in the world of suggestion; hardcore changed the rules and the audience. 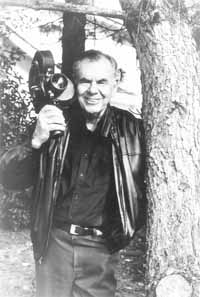 Meyer didn't simply dominate the field economically, he defined it. Four of the 20-plus films he had made between 1959 and 1980 were listed among the 100 top-grossing American films of all time: The three highest-rated (Vixen, Cherry, Harry and Raquel,and Supervixens)were his own independent productions, the lowest-grossing (Beyond the Valley of the Dolls) was a studio production. When Meyer's name comes up in any conversation, no one thinks of economics or filmic language, they think of one thing. Early on in that 1979 meal, host Jorge sent over a plate with two mounds of guacamole with the pits on top - avocado breasts for the master of the form.

Meyer's notoriety has prevented him from enjoying a much-deserved reputation as one of the most skilled American filmmakers of his time. Stylistically, the machine-gun-fire editing and overlapping dialogue of his films recall nothing so much as Sergei Eisenstein and Orson Welles. In terms of subject matter, Meyer's films have blazed a trail that has changed the course of the softcore genre and affected mainstream filmmaking.

In 1959 with The Immoral Mr. Teas, Meyer pioneered an innovation in softcore filmmaking. At that time, apart from the widespread cultural underground, the market staple was the nudist-colony film theatre that purported to be a documentary. The highlight would always be the volleyball game, which provided most of the film's action. In Mr. Teas, Meyer told the tale of a repairman who could see through women's clothing. It doesn't sound like much, but the next four decades of soft- and hardcore filmmaking flow from it.

Again and again, Meyer would revolutionize the field, adding detailed story (not just simple narrative), violence, and humor, changing direction whenever he perceived the audience to be growing bored. The dark, almost Southern-gothic-by-way-of-L.A. films like Lorna (1964), Mud Honey (1965), Motor Psycho (1965), and Faster, Pussycat! Kill! Kill! (1966) were followed by the Al Capp-esque broad comedies Vixen (1968), Cherry, Harry and Raquel (1969), Beyond the Valley of the Dolls (1970), and Supervixens (1975). At their heart was Meyer's obsession with film and with one particular part of the female anatomy.

At the end of that long-ago meal, we started to leave. Kitten Natividad approached the late, great John Bustin. Facing him, she smiled sweetly and opened her blouse. She was not wearing a bra, as was more than obvious even with her shirt buttoned. "Russ says you'd want to see these," she purred. We hit the door.

Meyer is a great independent filmmaker whose central theme is the interaction between large-breasted women and lumberjack caricatures of men. He writes, produces, directs, edits, and often shoots his own film. He cut his teeth as a combat newsreel photographer for the Army during WWII. After the war, he shot industrial films and gained a reputation as a master of the pinup; his work was seen widely in Playboy, then just recently debuted. Over the two decades after The Immoral Mr. Teas, Meyer produced 20-plus films.

Meyer's films are not for everyone. Even though I'm about to make some high-falutin' arguments about Meyer's techniques and content, that shouldn't suggest the films are more than they are. Meyer would hate that. Whenever he talks about people with whom he's worked, he defines their relationship as to whether or not they got his joke. Meyer loves ridiculously pretentious voiceover narrations as a way of beginning or ending his movies. It is clear he thinks that taking them out of their context, as bawdy comic-strip adventures, is silly and hysterical.

I love film cutting, the way movies are put together. American movies are dominated by Hollywood-style, invisible editing that pretends you're watching a fluid visual story and not a constructed film. Jean-Luc Godard argued that disruption of Hollywood cutting was inherently revolutionary. Sergei Eisenstein posited a kind of cutting in which you showed one image (thesis), matched it with a dissimilar image (antithesis), and through this combination achieved a meaning greater than either image (synthesis). Russ Meyer is the only American editor one could call Eisenstein-ian. There were no restrictions on his imagination because he worked in softcore, outside the Hollywood system, and, since he always wanted to suggest more than he showed, he used editing. (Cherry, Harry and Raquel is the most Eisenstein-ian film since Ivan the Terrible in its editing, not in its depiction of the class struggle.)

Meyer can cut any kind of scene, he can cut straight Hollywood or Tex Avery/Frank Tashlin cartoon, he can cut intense and broadly comic. The idea behind his films is to show big tits and have himself some fun.

The ideology that drives Meyer's films is the power of women - they have oversized breasts because they are so much larger than men. This is not to argue for a feminist perspective; quite the opposite. Meyer believes that, regardless of who holds the social, economic, or political power, women, because of their bodies, are sexual objects of desire. Even if men are physically stronger, they're nothing before women, who have that ultimate power.

Meyer is an especially gracious man. During that lunch at Casita Jorge, we asked him about cutting in Cherry, Harry and Raquel,pacing in Up, and what it was like to work with Erica Gavin - rather than about breasts and sex. The next morning, he met Ed Lowry and I for breakfast and gave us an interview detailing his trouble with 20th Century Fox, for whom he made Beyond the Valley of the Dolls and The Seven Minutes. This was the first time he went on record about what it was like for the independent king of softcore trying to work within the Hollywood studio system. He was hoping it would help generate publicity for Beneath the Valley of the Ultravixens. The interview was published in Film Comment, but not until a year later. Still, Russ has always thought fondly of us and I continued to talk to him several times over the years.

In early 1990, while Anne and I were in L.A., I called Russ and he invited us over. Meyer's house is near the reservoir in the L.A. hills. As Anne and I drove up a convoluted maze of small back streets, she remembered jogging around the reservoir on a previous L.A. visit. I love my wife; she was pregnant, and I was taking her into the world of mammaries.

The house is a giant A-frame, the living room going up 28 feet with a loft bedroom area at one side. Meyer got this house so he could film in it. The walls are covered with posters for Meyer's movies and photographs of enormously big breasted women - many photographs, large photographs.

At the time, he was handling the video distribution of most of his films and there was a work area downstairs. If you called to order a film, often it was Russ who answered the phone. In a room off to the side are rows of plaques, created by Meyer, to mark the important moments in his life. These ranged from the first camera he used with the Signal Corps to motel room keys from particularly memorable nights with some of his actresses.

There in his house, with my wife surrounded by looming enormous breasts, we talked about his life and his movies.

I love talking to Meyer because he loves his movies. He loved making them and all the reactions to them. He loves it when people get his joke and, I think, is completely thrilled when they don't. My feelings about Meyer's films have changed. Once I was dazzled by the sheer cinematic virtuosity, the dazzling editing, and flamboyant camerawork. Now I find that his films - and those of Ingmar Bergman - give me headaches. With Bergman it is because nothing goes on, with Meyer because there is too much.

Over time, I've also realized that if he were forced to save only one part of his work, Meyer would ditch the narrative and can the style but he would save each and every breast shot. They, after all, are at the heart of the joke.

Russ Meyer and his companion Miss Melissa Mounds will be in attendance at three screenings of Faster, Pussycat! Kill! Kill! at the Alamo Drafthouse on Thursday, November 12. Screenings are at 6:45pm, 9:15pm, and 12:15am and Meyer will conduct a Q&A following each screening. Prior to each screening will be the presentation of rarely seen footage from Meyer's work in progress, The Breasts of Russ Meyer. Live grindhouse music will be provided by the Elegant Esquires, who will accompany a go-go dancing show before the latter two shows. Faster, Pussycat! Kill! Kill! will continue - sans Meyer - at the Alamo on Friday and Saturday midnight shows.