Tweet
print
write a letter
Remember back to about l972 or so ... two burly men came to your mom and dad's (or uncle's, or aunt's, or a friend's parents') house and rang the doorbell. Sweating and puffing, they hauled in a Spanish-provincial-style AM/FM/phono/TV/8-track/cassette home entertainment center (carefully color-coordinated to match the walnut paneling) and deposited it on the avocado-green shag carpeting. The damn thing was monstrous, the size and weight of a Buick, more of a piece of furniture than anything else, but when they cranked it up it didn't sound too bad. Loud as hell, if a little boomy and woofy-sounding. So your folks put on a stack of LPs and enjoyed the hard-won fruits of dynamic stereophonic high-fidelity full-range reproduction (fully compatible with older mono LPs) and sipped highballs ... So now it's the 1990s, that entertainment center got dragged out by the curb many years ago, and you go to the video store to rent brain-polluting junk like Faster Pussycat, Kill! Kill!, Italian spy thrillers, Euro-sex-comedies, and the like. Your CD collection includes stuff like Esquivel, Martin Denny, Perez Prado, and other bachelor-pad favorites.

Let me insert my own caveat here. I have pretty mixed feelings about the lounge music revival as an entire generation dons suits, puts goo in their hair and tries to convince themselves that martinis actually taste good. At its best, lounge stuff like Esquivel, Combustible Edison, and Les Baxter is whimsical and inventive, with charmingly goofy instrumentation and arrangements that demand the listener's ear with their novelty. At worst, Mantovani's albums have been re-released, which is a major coup for record labels; there's a new market for stuff that's been out of print for years, music that people don't care about because it was originally made for people who didn't care about music in the first place. Strange how things have come full circle, that an audience who would have been buying Black Flag and Dead Kennedys in the 1980s are now picking up music that their parents abandoned some 20 years ago. Sorry, stuff like the Ray Conniff Singers and Henry Mancini sound about a half-notch above elevator music to me. That said ... 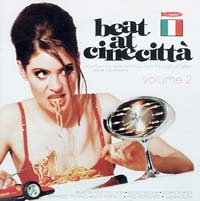 Ah, to have been in Rome in the Sixties, surrounded by both antiquity and Sixties Euro-mod, driving your Fiat to see your favorite B-movies, keeping up with your friends and their groovy tastes. Pierro Piccioni's "Mr. Dante Fontana" (from 1966's action film Fumo Di Landra) combines a lighthearted-sounding piano-and-harpsichord score with a female chorus calling for Mr. Fontana himself while he responds in distraught-sounding Italian. "Babylon I'm Coming" (from 1967's sex comedy Ti Ho Sposato Per Allegria) has a go-go dancer feel with square-wave fuzz guitar and Hammond B3 organ, while the title cut from1969's "A Doppia Faccia" has a melancholy, romantic chorus with a sort of waltz beat and sexy Italian lyrics. Nora Orlandi's "Soho" (from 1970's mystery/thriller Colpo Rovente) picks things up again with a fast-movin' beat and an organ line that's guaranteed to lever your dead ass up off the couch and get your hips a-movin'; "Easy Dreamer" (from the same movie) could almost be from an episode of Mannix or McCloud, except for that ethereal chorus of girl singers. "London Streets" (from caper movie Supercolpo da 7 Milliardi) is a verbatim lift of the rhythm and horn charts from James Brown's "Papa's Got a Brand New Bag," with the exception of a goofy lap-steel line playing the melody; "Party Al Piper" is a fast go-go number with a hyperactive l2-string acoustic guitar line overlaid! Another highlight is the title theme to the spy spoof Kiss Kiss Bang Bang, with a brash Petula Clark wannabe voicing the lyrics. The CD's packaging comes with a l6-page booklet with some very comprehensive notes on the songs and movies, poster art from each film and shots of an incredible Italian hottie devouring pasta and posing in front of an Alfa Romeo sedan in black lace lingerie (hey, ya gotta like that). 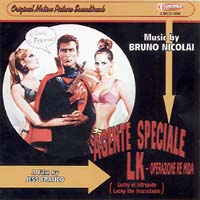 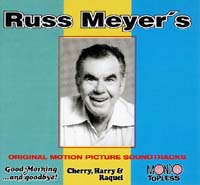 This three-in-one (no pun intended) collection includes music from three of Meyer's best-known skinflicks, Cherry, Harry and Raquel/Mondo Topless/Good Morning ... And Goodbye!. "South of the Border," from Meyer's Cherry, Harry and Raquel features a full orchestra blustering away with a mega-distorted fuzz guitar in the foreground, providing a weird mix of square and groovy. "Paula's Pretty Pussy" is "doo-doo-doo" singing combined with a sexy, romantic score; there's plenty of dialogue clips with bombshells Linda Ashton and Uschi Digart, as well as Meyer regs Charles Napier and Frank Bolger in one of his "dirty old bastard" roles; the "Epilogue" theme definitely calls to mind Sixties cigarette commercial music (for those old enough to remember cigarette TV ads). Mondo Topless consists mainly of Meyer's recurring splenetic narrator barking his hyperbole about "the topless craze sweeping the nation" and raving about "buxotic Babette Bardot," among other things. The booklet includes plot synopses of all three movies and loads of stills of all of Russ Meyer's incredibly cantilevered, gravity-defying women, all compiled with Meyer's stamp of approval (signified by his leering face).

I Told You Not to Cry

Gert Wilden is sort of the Quincy Jones or Henry Mancini of Germany, and was hired to do the soundtracks for a series of krimis (action-packed crime films) in the Sixties and Seventies. Fog-shrouded streets, mysterious black-gloved assassins, hard-boiled detectives, and butt-shakin' music all go hand in hand in the krimi; highlights include the title song, ("I told you not to cry/But you did"), "Hong Kong Twist," combining blaring horns with a thin-sounding Farfisa line, and "Green Spider Theme," evoking a martial, Dragnet, crime-jazz mood. "Oriental Twist" collides a vaguely Asian, pentatonic feel with a Chubby Checker beat and a Teutonic oompah tuba way in the background. Imagine a dashing detective romancing a bouffant-headed woman in an evening gown, then chasing a desperate criminal down a seedy Berlin alleyway, Luger in hand, trenchcoat flapping, and you have the feel of "I Told You Not to Cry." The 20-page booklet includes notes by Wilden himself and a plethora of action stills from the movies, in full color. 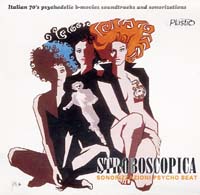 This CD ("Italian 70s psychedelic B-movie soundtracks and sonorizations") comes with liner notes in Italian and English both, with listings for instruments and "mood" for each piece. "Matto Grosso" (mood: hypnosis, anxiety) features a sneaky-sounding bass line with weird hooting voices; "Dopping 2000" (mood: young, free, active world) is more in the vein of Seventies funk, with a somewhat overactive wah-wah guitar line. "Duo Balls" (mood: fashion, eroticism) is reminiscent of what would happen if Booker T. and the MGs had an early Moog synth and a watery wah-wah guitar. The killer track, though, is "Voleur" (mood: juvenile atmosphere) with a totally misused synth getting weird digestive noises behind a fairly mundane jazz-rock score. "Leyla Theme" calls to mind a plate of linguini sitting on a checkered tablecloth with a candle burning in a straw-clad chianti bottle and two lovers gazing into each other's eyes, while "Cat Theme" (mood: modern atmosphere, traffic) could easily go with Pam Grier sporting an enormous Afro in a Jack Hill film, as could "To Jimmy" (mood: mysterious, suspense). Actually, those tunes correspond more to the hyper-violent, raw cop dramas that came from Italy in the mid-to-late Seventies. This CD's packaging is more simple, with a simple cardboard sleeve and a two-page booklet detailing the period of Italian cinema that these songs came from.

Highlights include the down-and-funky Hammond sounds of "Kalooky" (I Bisaquei), going from sparse and minimal to all-out pasta jam session, and "Snip Snap" by director Dario Argento's house band the Goblins, which prefigures Seventies giallo-rock with a harpsichord-type keyboard laying down a repetitive funk line and various drippy synths gooshing away, panning from left to right. Albatros' "Har-i-ah" starts out with a theme-from-Shaft feel, but soon changes to more of a car-chase atmosphere. Similarly, "Operazione Beat" by Mario Molino e i Beats could easily have come from a Sixties American biker movie, with Davie Allan & the Arrows-type Mosrite Fuzzrite guitars. My only gripe about this CD is that the booklet is devoted to the label's catalog (much of which is pretty intriguing), with precious little information about the films that these songs came from. 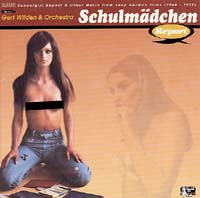 The late Sixties and early Seventies saw a rash of "Schoolgirl" soft-core films from Germany (some of which made their way onto American drive-in screens), with young nubiles finding themselves in various sexy predicaments and the ubiquitous Herr Wilden scoring the music. "Title Theme" features way-out guitar and earthy Yardbirds harmonica combined rather incongruously with the entire Wilden orchestra and the requisite Vox Continental organ; "Follow Me" is even stranger, with nasal uber-fuzz whammy-bar guitars, a thumping bass line, tambourine, organ, and the Wilden horns in a combination that could make the zombies in Carnival of Souls jump about and do the funky chicken. The bass line to "Dirty Beat" recalls oldies-radio fave "Expressway to Your Heart," while "Dirty Boy" rips off Led Zeppelin's "Good Times Bad Times." Filled with ugly fuzz sounds that the average garage-revival band would kill for, Schulmadchen Report is a more happenin' compilation than the I Told You Not to Cry CD, mainly since the titillating movies they were made for were aimed at a younger movie-going audience.

"Ladies and gentlemen, welcome to violence! The word and the act! While violence cloaks itself in a plethora of disguises, its favorite mantle still remains ... sex!" Thus opens the soundtrack to the Russ Meyer exploitation classic Faster Pussycat! Kill! Kill!, segueing immediately into the Bostweeds' Animals-tinged theme song (complete with go-go audience members hollering "Go, baby, go! Harder, faster!"). Unfortunately, most of the soundtrack to Faster Pussycat consists of fairly standard suspense music, interspersed with clips of the killer dialogue from the film. Hey, that's enough, though ... with dialogue like that, no wonder that movie is a favorite of John Waters. The theme to Lorna is crooned by a smarmy bargain-basement Andy Williams wannabe; overall, though, it doesn't stack up musically against the Italian and German stuff.

So there ya have it. If you call yourself a lounge music aficionado and you haven't heard this stuff yet, you have no idea what you're missing; same goes for if you're a B-movie freak. It definitely is derivative of American pop, R & B, and rock, but at the same time it's all pretty off-kilter and bewildering. The Italian CDs have more soul and are less sterile-sounding than the Gert Wilden stuff, but all of them have songs that are guaranteed to liven up your next cocktail gathering.

More to the point, they all recall a day when movie scores were compositions, done with a full horn (and string) section complete with charts, rather than a geek toiling away on a computer with MIDI hookups to various synths and a drum machine or record companies trying to milk their last one-hit wonder. So start scouring your Video Search of Miami catalog for the movies, brush up on your Italian, and start bugging your local record store to get a hold of this crap; it'll have you rollin' up the rug, slingin' Scotch, and doin' the frug in your stocking feet.