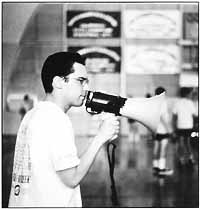 Whatever his subject may be, the bottom line is the director is fascinated by the thick, black tendrils that make up that less pleasant side of human behavior. I spoke with Singer about his work thus far and what's upcoming as he prepares for Apt Pupil's closing-night premiere in the film festival portion of the Austin Heart of Film Screenwriters Conference.

Austin Chronicle:The Usual Suspects was what most people would call a "smart" movie, that is it didn't play down to the audience in any way, shape, or form. Do you find that the prevailing attitudes in Hollywood these days make it difficult for films like that to be made?

Bryan Singer: Sure. I think there's a fundamental problem in that the readability of a script is very different from the shootability of a script. A more interesting script can be a little dense when you first read it and only the person who conceives it or the person who's developed it understands how wonderful it can be as a movie. When you first read it, however, you might find it too disorienting, or dense, or too wordy, and that's why often the scripts that sell are very "readable." And so when it comes to shooting them they're often very predictable and boring as well.

AC: What was your original pitch for The Usual Suspects and how was that received?

BS: Well, it wasn't really a pitch, it was a script that had been developed over the course of six or seven months. We ended up sending it out to 25 different companies that I had built relationships with through Public Access. Ultimately, it was rejected by all 25 companies. Finally, a German company called WMG came through and set us up in offices where we could make offers to actors. Then, when we had assembled about five of the principal cast, WMG's money fell through. So we had to go to the actors and have them agree to sign on to the picture and then we used their names and the whole package to go to PolyGram/Spelling and get a negative pickup. (That's where they guarantee to buy the film once it's finished, which allows you as a filmmaker to go with that guarantee of purchase to a bank to secure funding.)

AC: Did those Academy Award nominations catch you off guard?

BS: You don't know what's going to happen. By that time there had been enough hype that we thought it might be possible. In fact, when we were developing the script Chris McQuarrie [the screenwriter] and I used to joke that if we made Kevin Spacey a cripple we'll win him an Oscar. That's how you do it, though, you've got to have some physical or mental impediment in there.

AC: All three of your films so far have been very stimulating in that the audience has to think about what's going on, they can't just sit back and let it wash over them. Are you picking your projects because they're challenging, or is that something that just occurs along the way?

BS: I really just select them as they come. To me it's not really a big deal which movie you choose next. The big deal is that you give it the right kind of attention. In looking back I see a recurring theme of things not always being what they seem. It's not something that I consciously set out to do. Perhaps subconsciously.

AC: Your films also tend to focus on the dark side, as opposed to the violent side of humanity, though the two frequently go hand in hand.

BS: I think that's more terrifying, trying to find villains and trying to find the evil in mankind. I think that's more interesting to people, trying to get under the skin of real, you know, evil. But it's so hard, because there are some movies that I don't like, like I don't care about serial killers, I don't care about characters like that. I think it's interesting to watch certain actors play them, like in The Silence of the Lambs, but perhaps I'm more interested in a mystical evil, you know, or a touch of the impossible, a touch of the supernatural amidst the natural. I don't know, it just happens to be what I've made. Public Access was in an election year and so we wanted to do this twisted allegory about the notion of buying air time and subversive agendas. The Usual Suspects happened because Chris [McQuarrie] had an idea about five felons who meet in a lineup and go off on an odyssey of crime. Only later did the idea of the twist at the ending -- which ultimately lends itself to this dangerous and terrifying and evil character -- come about. And as for Apt Pupil, I read that when I was a boy, and I thought there's an interesting relationship. The idea of this dark and terrible deed that occurred so many years ago in Europe and how could that manifest itself in modern-day suburban society. That interested me. All these things happened one at a time. My upcoming film The X-Men interests me, not because of any inherent evil or darkness in it, but because of the idea of reluctant superheroes, and how we follow them into this world of the future.

AC: How did you go about casting the leads [Ian McKellan and Brad Renfro] for Apt Pupil? That had to be difficult seeing as how it's such a self-contained piece of nastiness.

BS: First I cast Ian McKellan because I knew him. I had been introduced to him by a mutual friend and we hit it off, and even though I felt the role was written for a very stoic German actor, I thought that Ian's British flamboyance and charm could bring another dimension to the role that I thought it needed. Plus, he was not very recognizable, so like Kevin Spacey in The Usual Suspects, it would be an opportunity to sort of re-invent someone's image and introduce them to more mainstream films, as it were. Often, when you try to create a mysterious character like Keyser Soze or Kurt Dussander, if you have an actor who brings in baggage that a mainstream audience fully recognizes and is familiar with, it takes away from the history of the character.

AC: Nazis, murderous teens, smoldering cats ... Apt Pupil has the potential of being a relentlessly downbeat story from start to finish. How was it on the set? Was there any levity at all, or was it all "Okay, now we do another scene in which the Nazi discusses his love of killing?"

BS: Plenty of levity. The scenes that will look the most terrifying to the audience were probably some of the funniest experiences during shooting, whether it's fake blood or daggers in the back or whatever. A couple of the goose-stepping scenes were a little intense, I remember, but on the whole it was pretty fun. There are those tense times you run into on any film, where you're racing against the sunlight or you're going into overtime or stuff like that.

AC: How'd you become involved in The X-Men? You weren't really a fan of the comic book, were you?

BS: No, I never read the comics as a teenager, but I think that allows me to bring a fresh eye to the material. I was offered the project with these older scripts twice before, and I passed both times. Eventually, my producing partner, Tom DeSanto, who co-produced Apt Pupil, thought that I might be interested in it and set up a meeting between me and all the Marvel Comics people and the 20th Century Fox people, and I thought, "Yeah, this is a very interesting universe and I'd like to try and explore it."

AC: Did you get to meet Stan Lee?

BS: Oh yeah. He was great, just this very, very nice old gentleman. I was talking to him about my ideas for the project and I kept referring back to The Usual Suspects and finally Stan asked me why I kept name-dropping the film. Turns out he didn't know I had directed it, no one had told him. Anyway, he stood up and shook my hand and said that that was his and his wife's favorite film. He was really terrific.

After that, we wrote a treatment along with several writers to create our own original screenplay. We're really excited about it.

AC: It's quite a different project than anything you've tackled before.

BS: It's very special-effects intensive, but still a lot of good characters and a good story. The trick is to learn as much as you can about what's possible in the world of special effects. I visited the set of Titanic when I was down in Mexico, and also visited the set of Star Wars when I was in London. I spoke with Lucas and Cameron and John Landau about what could be done, and essentially learned as much as possible. And then I forgot everything I'd learned and started doing it my own way.

Apt Pupil screens Thu, Oct. 8, 9:30pm, at the Paramount Theatre. Bryan Singer and screenwriter Brandon Boyce will be in attendance.