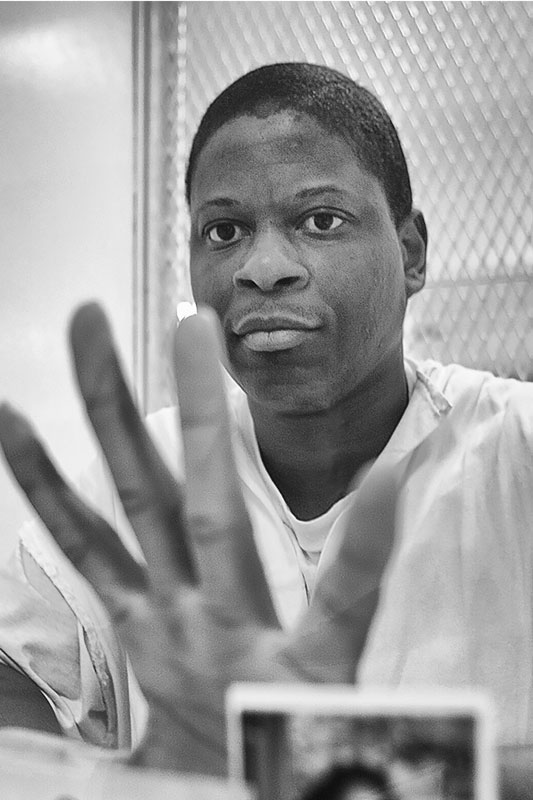 Staff photographer Jana Birchum explains the story behind her favorite shot of the year:
“I guess my favorite picture from this year is actually a picture from 2001. It’s the shot of Rodney Reed the first time I met with him, when I was partners in crime with Jordan Smith. Jordan’s with the Intercept now, and way too cool for me to run with. But we did some good stuff back then. And one was her finding and reporting this story, which she’s stayed on all the way to Reed’s recent stay of execution, only 2 days before his final execution date. They’ll rehear the evidence. Test the DNA. It’s a new chance to tell the truth. This is the work of many people, including The Innocence Project; attorney Bryce Benjet, who is the only attorney I personally know who has successfully gotten people freed based on wrongful imprisonment; the activists; and especially the family of Rodney, who has been tireless in his defense.
“For my part, this image has had an interesting life. It’s currently living on the Instagram of Kim Kardashian, words I never thought I’d type. But she took up the cause, and I sold rights to the image to the Innocence Project. It’s a meme. You’ve seen it everywhere. But it has actually never been printed until now. The new interest in the case brought it out of my archive. It was always my favorite from that shoot. (though I love the one where he’s sitting alone in the row of telephone cubbyholes). But now it has life. It makes a good meme. It says what I wanted it to say. I started this work to change things. It’s nice when an image does its job.”