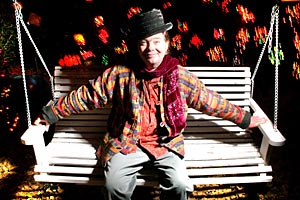 All That May Do My Rhyme

The Evil One, Don't Slander Me, Gremlins Have Pictures

True Love Cast Out All Evil

Don't Slander Me, Gremlins Have Pictures

On Margaret’s personal and passionate way of writing about music

Reanimating one of the great Austin tributes

Announcing the 2008-09 Austin Music Awards lineup and sneaking past the velvet rope at Pangaea, while Andrew Kenny trades American Analog Set for the Wooden Birds

Making the rounds for the third annual HAAM Benefit Day, while the Black Angels walk with a zombie

They watch the Sci Fi channel up on the 13th floor.