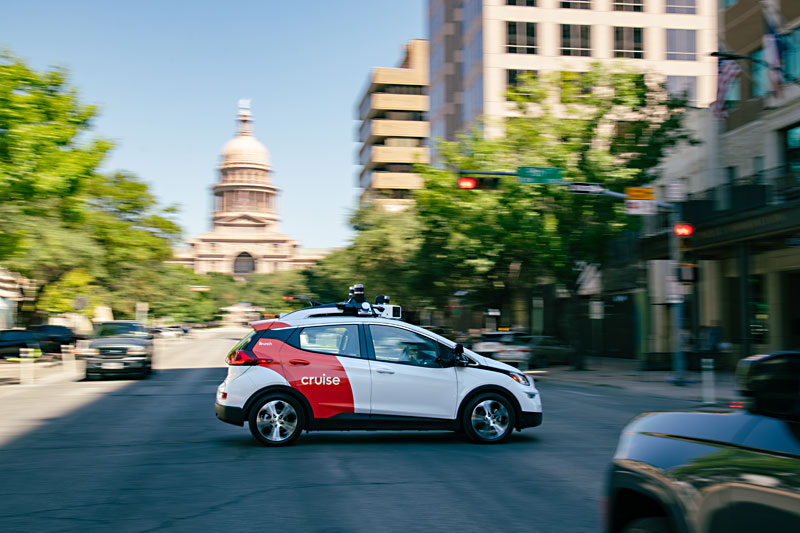 On a recent evening bike ride, Marshall Geyer noticed what was becoming an increasingly common occurrence in his Down­town neighborhood: a Cruise vehicle behaving weirdly. Cruise, the autonomous vehicle company backed by General Motors, recently removed the operators from its cars in Austin, meaning they no longer have drivers behind the wheels. As Geyer approached the vehicle, he pulled out his phone and recorded as it put on its blinker and veered into the opposite lane. He tweeted the video in reply to another tweet showing a Cruise drifting into a bike lane, and Geyer's clip took off, quickly garnering tens of thousands of views.

"I think just in the general Austin cycling and micromobility community, there's a lot of concern that I and others have about these just being a little bit erratic when it comes to handling things like bikes, pedestrians," Gey­er said, adding that the rollout of the vehicles in Austin felt rushed. Cruise first entered the market in September with operators and started driverless rides for "friends and family of Cruisers" in mid-December, according to Megan Prichard, the company's vice president of ridehail.

Cruise feels that its AI-powered technology helps it enter new markets safely and quickly. A Cruise vehicle "can handle both the mundane elements of driving as well as the most unexpected, and is able to generalize to new and previously unseen scenarios and cities," Prichard said in an email. "This means we aren't starting from scratch in each new city; instead, we're working off the 800,000 driverless miles our fleet has driven and continuously learns off of, and the comprehensive tech, operational, and hardware expertise developed over years." Vehicles at this level of automation typically have collision-detection sensors.

As for the videos circulating on Twitter, the company is reviewing its lane mapping in the areas, according to a company spokesperson. Prichard told us that it prioritizes building community trust. "When introducing our driverless service, we start slow, in smaller parts of the city and typically at night so we can ensure every aspect of the experience is smooth and efficient before expanding," she said. "We also actively engage with our communities, and with local, state, and national advocates and organizations for road, pedestrian, and bicyclist safety to hear their ideas and feedback for making our services as safe as possible."

Geyer is calling on the city to take action. But according to an Austin Transportation Department spokesperson, there's not much that it can do to regulate the vehicles. "In 2017, the Texas Legislature passed Sen­ate Bill 2205 to amend the Texas Trans­port­ation Code with new policies governing the operation of autonomous vehicles (AVs). State law preempts local authority of self-driving vehicles," an ATD statement read in part. It did note that ATD has offered its expertise to AV companies.

Geyer hopes there's still time to hit the pause button. "I feel like a very straightforward, and probably unsatisfactory for Cruise, solution for them here would be to just simply have people in their cars still until their erratic bike lane behavior is addressed," he said. When asked about that solution, Prich­ard said the company believes in its continually improving technology and is "proud of [its] safety record." Rep. John Bucy III, HD 136
“Any progress to get back to where we treat all humans as equal ... I’ll of course support”