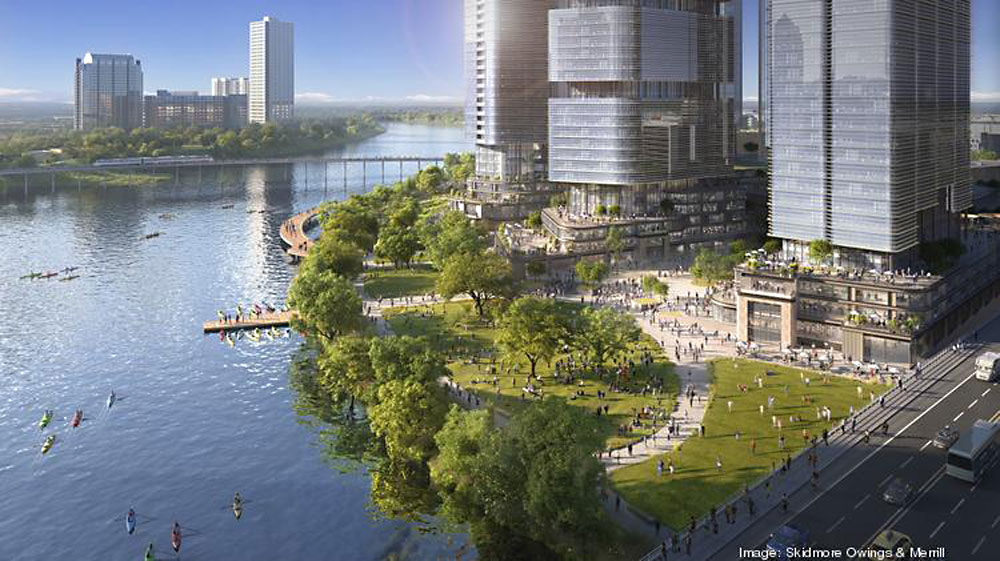 A rendering of the luxury apartments set to go up where the now empty Statesman headquarters building stands along the lakefront (Rendering by Skidmore, Owings & Merrill)

It was only fitting that the Statesman PUD, debated before City Council for more than a year, would need a two-day-long meeting to win final approval, 8-2-1, on Friday, Dec. 2. Mayor Pro Tem Alison Alter and Council Member Kathie Tovo voted against the rezoning of the former home of the daily at 305 South Congress, while CM Mackenzie Kelly abstained.

Despite their reservations, the 19 acres of the PUD (planned unit development), considered to be Austin's most valuable commercial real estate, are set for transformation into six new towers set around a new park to adjoin the Butler Hike-and-Bike Trail. Those towers are planned to contain a 275-room hotel, 1.5 million square feet of office space, 150,000 square feet of retail, and 1,378 residential units.

It's the last of these components that drew the Statesman PUD conversation out for so long, as Tovo led the charge to set aside as many of these units as possible for people who otherwise could not afford to live in a Downtown skyrise at the heart of America's fastest-growing metro area. In the end, income-restricted units will be provided in addition to the high-value apartments and condos – but not on-site. Developer Endeavor Real Estate Group will pay the city $23.2 million to provide those units at a to-be-determined location within 1.5 miles of the PUD site. This could be at the city-owned One Texas Center, no longer needed as office space but on a site large enough to accommodate a lot of housing (and next to an extended-stay hotel that could also become housing in the future).

Some on Council wanted about 10% of the on-site units to be income-restricted; Endeavor offered closer to 4%, as these units are expensive to construct. (Endeavor also floated buying an existing apartment complex nearby and making it 100% affordable.) But instead, a compromise was reached on paying what's called a fee in lieu – a policy tool viewed skeptically by some CMs as a way of letting developers off the hook of actually producing affordable housing.

A third-party economic analysis estimated a $418,000 construction cost for each housing unit within the PUD, so the city would have to spend more of that $23.2 million to bring the subsidized cost of those units down to a level attainable by people earning somewhere around 80% of Austin's median family income ($61,800 for one person). The on-site option likely would have netted around 55 such units; off-site, the city is likely to net around 70 – maybe more if the city bundles the $23.2 million with any of the shiny new housing bond dollars voters approved last month (or builds on property it owns, like One Texas Center).

In a surprising twist, CM Leslie Pool, typically a fee-in-lieu skeptic, argued for it here. "Subsidizing ... [nearly] a half a million dollars for each of those units is just nuts," Pool told her colleagues. "The value is not there." Tovo was not swayed, telling her colleagues she could have supported a guaranteed 70 affordable units at a neighboring property (as Endeavor had proposed). "I think we will see a good development there, but I do wish we had those affordable units, not a fee in lieu, and more of them."