Election Ticker: Of Recounts and Run-Offs 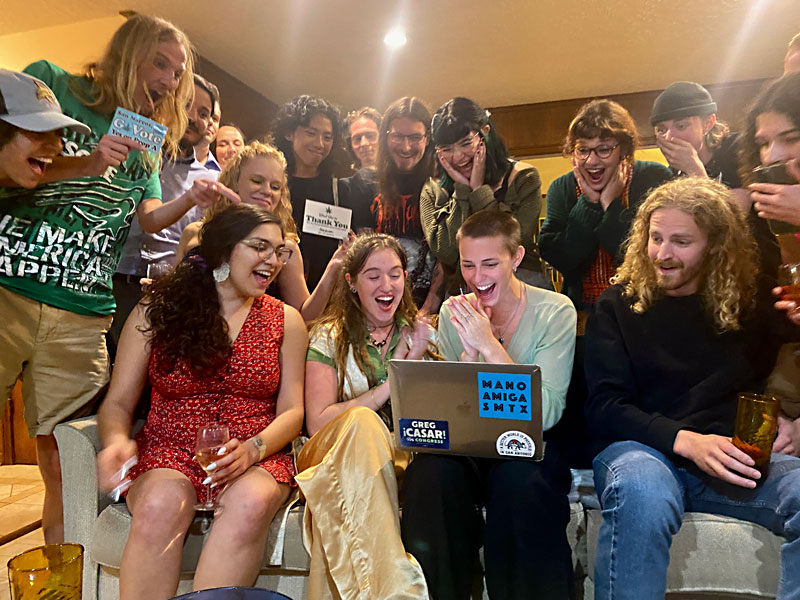 An election watch party in San Marcos held by Mano Amiga Action, upon glimpsing first results showing 81% support for their "reeferendum," a ballot initiative to decriminalize marijuana. The blue wave in the county seemingly prompted the recounts requested in two races. (Courtesy of Caldwell/Hays Examiner)

Republicans are questioning the results in two of Hays County's most important elections, 10 days after a blue wave election that saw progressive candidates triumph up and down the ballot. Conservatives Mark Jones and David Puryear, who ran for county judge and district attorney, respectively, requested recounts in their contests on Nov. 17. The recount was expected to take several days.

"It's part of that movement of election deniers," said County Judge Ruben Becerra, who beat Jones to win a second term by 926 votes out of 88,108 cast. "Like Barack Obama said, 'They accept the election results when they win but they don't when they lose.'"

Becerra and District Attorney Kelly Higgins have each pledged to reform Hays County's broken criminal justice system. Both were early supporters of Proposition A, the ballot initiative to decriminalize possession of small amounts of marijuana, which won an overwhelming 82% of the vote. Both have been fierce critics of outsourcing inmates to jails outside of Hays County due to overcrowding at the jail and the inability or unwillingness of outgoing D.A. Wes Mau to put diversion programs in place to keep low-level offenders out of the jail in the first place.

Higgins beat Puryear by a more substantial margin than Becerra did Jones – 5,500 votes, 53% of the vote compared to Puryear's 47%. He questions his former opponent's motives in seeking a recount. "I don't believe there's a possibility of a good faith recount at that margin," Higgins said. "I believe they're looking to locate or fabricate some grounds for a lawsuit against my taking office or Ruben Becerra's taking office." As of press time, neither Puryear nor Jones had responded to requests for comment from the Chronicle.  – Brant Bingamon

Education Austin, the union that represents teachers and classified staff at Austin ISD, has endorsed Zohaib "Zo" Qadri over Linda Guerrero – an AISD teacher for nearly 30 years – in the City Council District 9 run-off. EA does not typically endorse in Council races on its own, but candidates that win the endorsement of the Austin Central Labor Council can claim endorsement from any individual CLC union. CLC did not endorse in the D9 race this year, so it's notable that EA took the initiative to endorse Qadri and not an AISD teacher. EA President Ken Zarifis said that members felt Qadri would bring "fresh, progressive ideas" to Council and that his "union bona fides are clear," noting that his campaign staff is unionized but Guerrero's isn't.  – Austin Sanders

The Rest of the Ticker

In the District 3 run-off, Daniela Silva got a boost of support from former contenders José Noé Elías, Bertha Rendon Delgado, and Gavino Fernandez Jr. in her Round 2 with José Velásquez, who led Silva by 2% on Nov. 8, 36%-34%. Together, Elías (endorsed by the Statesman) and Fernandez secured about 16% of the vote (Rendon Delgado dropped out before the ballot was final)… Velásquez, along with D5 contender Ryan Alter, filed a lawsuit against the city on Nov. 21 over awarding cash from the Austin Fair Campaign Finance Fund, which currently holds about $66,000 in lobbyist registration fees. The city's Law Department has determined that only Silva and Guerrero met the 25-year-old Fair Campaign Ordinance's requirements, and would split the fund. The plaintiffs were promptly denied the restraining order they requested and have decided not to pursue legal action further, so the city plans to distribute the fund to Silva and Guerrero as planned.  – A.S.