Hands off the wheel 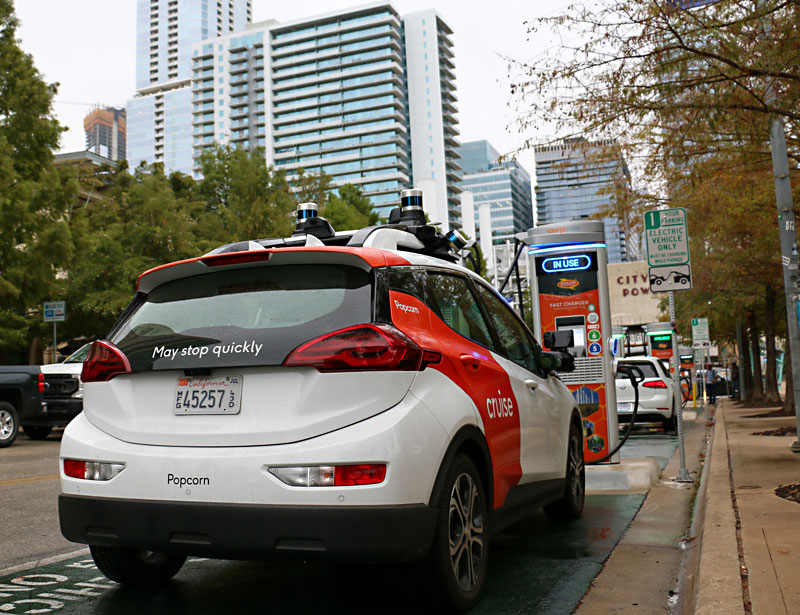 The road to driverless cars has been a long and winding one. Look no further than the Oct. 26 news that Argo AI, the autonomous vehicle company backed by Ford Motors and Volkswagen, would be shutting down. Only a few weeks earlier, Argo AI had launched a partnership with Lyft to offer supervised autonomous rides around Austin. It had previously announced a partnership with Walmart to carry out deliveries. The company, which began operations in Austin in 2019, had about 20 vehicles as of October that could be seen around town.

“By the end of the year, I’m pretty confident we’ll have a driverless [rideshare car] out here.” – Cruise VP of Ridehail Megan Prichard

Nonetheless, Austin remains on the forefront of autonomous vehicle advancements. In addition to the now-defunct Argo AI-powered Lyfts, GM-backed Cruise has also been operating vehicles on Austin's streets and recently opened a waiting list for its rideshare service in the city. The company already has driverless cars offering rides in San Francisco and vehicles operating on Phoenix roads, where it has a partnership with Walmart's delivery service. That's not to mention Austin's robot delivery services, offered by companies like Coco and Refraction AI.

So why are these companies flocking to Austin? Some cite the city's innovative culture, others its willingness to be unique, and perhaps even the clear skies and sunshine that help the vision of the vehicles. It also doesn't hurt that the state of Texas allows AVs to be on the road without an operator.

Austin Transportation Department Assist­ant Director Jason JonMichael ties the appeal back to the city's ethos. He points to Austin's roots in initiatives like the Wi-Fi Alliance and more recently in the OmniAir Consortium, a group that in part focuses on toll technology and connected vehicles. Over the course of multiple decades, Austin has had a "unique role in playing a part [in] global computerization then wireless networking, and most recently connected and autonomous vehicles and electrification," JonMichael said.

JonMichael doesn't see a need to slap rules on autonomous vehicles until safety concerns arise. "One of the things that I can tell you is that I appreciate the state's AV laws," he said. "Why? Because for my partners, the AV companies, they're not looking at the state and think[ing] it's a risk, right? If one city has a different rule than other cities, that's a risk. That's a business risk for them."

In September, Cruise began operating cars in Austin. The current group of around 12 cars are all supervised, but Cruise Vice President of Ridehail Megan Prichard said that's about to change. "By the end of the year, I'm pretty confident we'll have a driverless one out here," Prichard said. Cruise opened its waitlist to Austinites interested in using the rideshare service in late October. Unlike Argo AI's partnership with Lyft in Austin, Cruise has its own app to book rides. In San Francisco, the company operates at night, because of the potential safety benefits of avoiding tired drivers on the roads. Overall, Prichard, who previously worked at Ford on an Argo AI deal, is excited about the industry's direction. "I've been in this space for a while; this is the first moment I really see an inflection point for, in particular, self-driving as a service," she said.

The AV company's San Francisco rollout was not entirely smooth, as Bay Area media reported instances of Cruise vehicles blocking emergency vehicles or simply stopping in the middle of roads. Also, a National High­way Traffic Safety Administration report found 367 crashes and five fatalities in partially autonomous vehicles from July 2021 to May 2022. The vast majority were from Teslas, which have an autopilot feature (and none of them were from Cruise vehicles). AV supporters counter that humans aren't the safest drivers either. Last year, over 100 people died on Austin's roads and almost 43,000 people died nationwide.

Peter Stone, a professor of computer science at UT-Austin and executive director of Sony AI America, said the technical aspect of AVs is within reach, but the wider ecosystem of getting them on the road is complex and includes issues like cost, insurance, and more. But the broader challenge that seems to always come up is humans. It turns out that humans have grown very good at navigating complex interactions with other humans. Robots and AV technology aren't quite there yet. For example, Stone has tested robots trying to navigate a crowd after a football game. As humans, we're good at identifying pathways or making eye contact to communicate our next move. "How can we get robots to be able to interact with people in this kind of social navigation way – both inside a car or just outside in a pedestrian zone? These are sort of active research challenges, and things that we're very interested in," Stone said.

Junmin Wang is an engineering professor at UT who runs a research initiative looking into AVs. He said that as long as an AV is in a relatively normal situation, it will perform fine. However, putting an AV in a complicated situation, like a kindergarten parking lot, might not go as well. "I think they would be completely confused," he said. If faced with a swarm of unruly 5-year-olds flocking to their parents' cars, the AV might stop and give control back to the human in the vehicle.

For Stone, it's important to consider the historical arc of autonomous vehicles. He first worked with AVs around 2003 and again in 2007 as a part of a competition where autonomous vehicles interacted with manned and unmanned vehicles. While advances have been made, Stone said it's important not to get ahead of ourselves. "The first autonomous cars that I was aware of were in the late 1980s, and people have continually said since then that it's five years away. 'Within five years, we'll have all autonomous cars everywhere' ... I've always felt that was a little too optimistic."

* Editor's note Thursday, Nov. 17, 1:05pm: This story has been updated. The story originally stated Megan Prichard had worked at Argo AI; Prichard worked at Ford and helped broker the Argo deal. We regret the error. ”