Via 313 has hired an HR consultant to stop unionization 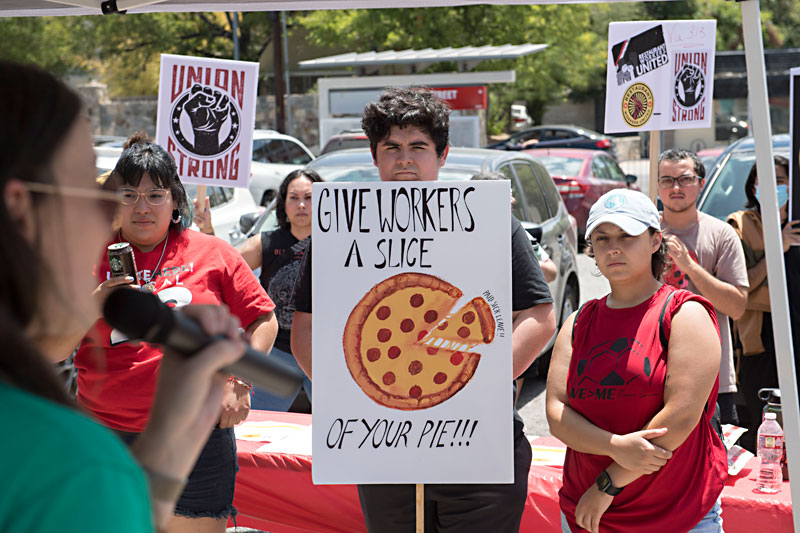 In the months since Via 313 workers at all three Austin locations announced their intent to unionize, there have been "a lot of ups and downs," says Elyanna Calle, an organizer with Restaurant Workers United. Henry Epperson, a worker/organizer at the E. Sixth location, says that at first the founding owners of the pizza chain, brothers Brandon and Zane Hunt, seemed amenable: "Two months ago, we asked them point-blank if they would support our union, and they said they wouldn't get in the way. They said it was our right to organize. Then all of a sudden, the company started moving against us."

Calle and Epperson describe an organized campaign of "intimidation and manipulation," including the hiring of Daniel Block, an HR consultant from Labor Management Associates, whom they describe as a union-buster, to run several "captive audience" meetings. Epperson says he has "tried to bend the truth and intimidate people to either dissuade them from voting or hopefully get them to vote no … There were things he said that were blatant lies, like that dues were going to be $100 a month. So that's definitely created a negative tension at work, I would say, people feel like they have to choose sides. Whereas when we first started, a lot of people were excited to learn more about unionizing."

A newly created anti-union website, which also doxxes a volunteer helping RWU, reads: "Via 313 sincerely believes that a third-party influence could seriously impair the relationship between associates and management. We ask that you carefully consider the many benefits of your job that are yours without the need to pay union dues and risk the loss of your pay through strikes, work stoppages, fines, and other costs of union membership." Letters signed by the Hunt brothers and posted at all locations that have since been taken down read: "We do NOT believe that having a union is in the best interest of our company, our employees, or our customers." The brothers have also posted a statement to the website echoing this message, though Via 313 had not responded to multiple requests for comment from the Chronicle as of press time. Calle says the brothers "did say they would stay neutral, and that has obviously not been the case. But also keep in mind the corporate entity, Savory [Restaurant Fund, which has invested in Via 313]. I think things would be different if we didn't have that corporate involvement. It's hard to say who's really pulling the strings here."

Ballots were sent last week to eligible voters at all three locations, to be returned by Oct. 20 and counted on Oct. 27. "I'm feeling confident that we can win," says Epperson. "But it's still been tough."