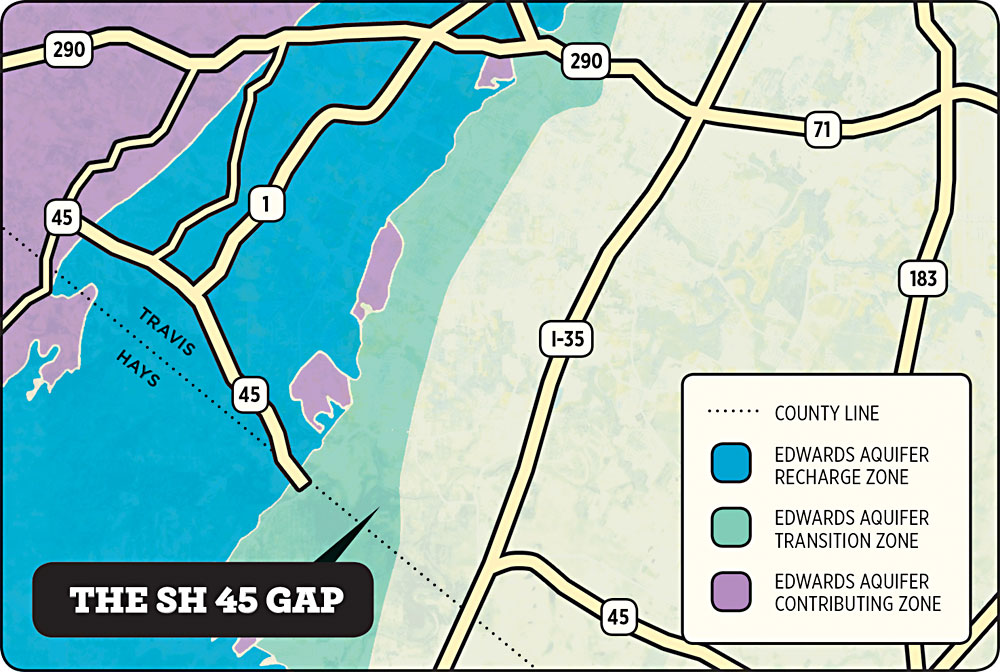 Once again, a plan has emerged to build a new road to bridge the gap between Texas State Highway 45's southwestern and southeastern segments – left unbuilt for decades to prevent the road from becoming a connector between I-35 and Loop 1 (S. MoPac), completing a western loop that environmental advocates feel would be disastrous to the ecologically fragile area and the aquifer transition zone beneath it. Since the 1980s, the city of Austin and Travis County have used their clout to keep the SH 45 gap empty, but on Aug. 30 the Hays County Commissioners Court voted 4-1 for a $2.5 million design contract with CP&Y Inc. for a less-than-4-mile arterial – with the vote based at least in part on perceived misinformation about Travis County's support.

Before the vote, County Judge Ruben Becerra and Commissioner Debbie Ingals­be, both Democrats, asked their GOP colleagues Walt Smith (who is running for reelection) and Mark Jones (who is running against Becerra) for their "general assessment" of conversations with their Travis counterparts. Jones said he couldn't speak for them, but his assessment was "very positive," and Smith added that at least one Travis commissioner (he didn't say who) said, "It needs to be y'all leading the charge on this." On Sept. 13, Travis County sent a letter "to make clear [that 'very positive'] is not an accurate portrayal of [commissioners'] views" and to request that Hays County "halt action on this study until … collaboration and coordination is undertaken."

Travis County Commissioner Ann How­ard told the Chronicle that Smith and Jones met with her in the spring, and "without knowing exactly what was said at lunch seven or so months ago, besides being positive about life, I most likely would have said that you've got to be kidding to think that Travis County residents would easily agree to building more over the aquifer. Those are fighting words!" She added that "what's important is that, at this juncture, Travis County is on record for not wanting to build over the aquifer and extend this road."

It also came to light that this January, CP&Y Inc. PAC gave campaign donations of $2,500 each to Smith and Jones. At the Sept. 27 commissioners court meeting, Smith, Jones, and Becerra came into conflict, with Jones alleging Becerra was "campaigning from the dais." Mike Clifford, technical director for the Greater Edwards Aquifer Alliance, says, "This is a real partisan warfare thing going on."

Travis County Commissioner Brigid Shea says, "The really ugly truth about this whole project is [that SH 45] was originally promoted by developers as a loop." When its backers learned that completing the loop connecting I-35 and MoPac would trigger a need for a full federal environmental review, "and they knew there would be problems sending a massive highway over the aquifer, they backpedaled and said, 'No, no, it's just a few [segments] that don't connect.'" The project is not in the Austin metro area's 10-year regional transportation plan, though it is in the long-range 2045 plan.

Should the project proposed by Hays County ever proceed past the design stage, the construction itself could pollute the creeks and aquifer with runoff that would likely show up at Barton Springs within three days, as would the future runoff from the road surface traveled potentially by tens of thousands of cars daily. Although Jones claims the SH 45 gap project won't make traffic worse, Clifford says drivers will have three choices: "They can either stay on 35 and go through Downtown Austin, which nobody likes to do, because it takes forever. They can go on [a] tollway, which nobody likes to do, because it's expensive. Or they can take this new beltway, and that's what everybody's gonna do."

Clifford says that "the proverbial horse has left the barn" after this vote, but GEAA will redouble efforts going forward. Becerra warned, "There's no way any other multi­jurisdictional effort will ever take place if all the jurisdictions that are impacted by the project aren't behind it."

A version of this article appeared in print on October 7, 2022 with the headline: Mind the SH 45 Gap