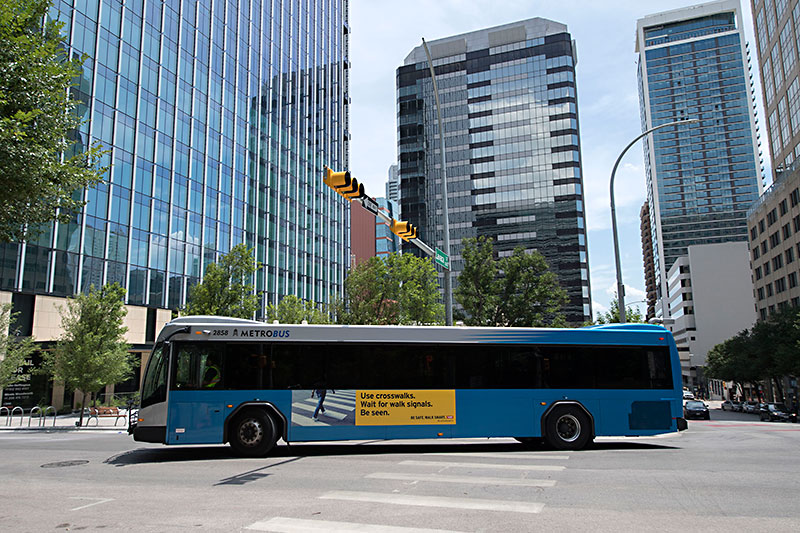 CapMetro bus at Lavaca and Seventh (photo by John Anderson)

Following its record-setting $255 million purchase of 197 electric buses last year, the Capital Metro Board of Directors committed at its Sept. 26 meeting to spend $299.5 million on 157 more vehicles and their charging infrastructure over five years. The early returns on the agency's electric bus investment have been positive. "They're operating well, under the hot conditions," said Rob Borowski, Cap Metro's sustainability officer, during the board meeting. "They seem to be exceeding our performance right now. We were looking at 150-mile range and they seem to be averaging more than that, but there's still a lot of work to do as we get the new buses coming in."

Of Cap Metro's first dozen electric buses on the road now, six were made by Proterra (based in California) and the other six by New Flyer (based in Manitoba). Repre­sent­a­tives from both suppliers, which will produce the nearly 200 vehicles approved last year, touted the quietness of electric buses compared to their diesel counterparts in the fleet, which includes about 400 vehicles. A Cap Metro spokesperson added that the buses do not produce as much heat.

But the primary push toward electrifying the fleet is the potential environmental benefit, as the electric buses won't produce any tailpipe emissions. According to the U.S. Environmental Protection Agency, transportation is responsible for 27% of greenhouse gas emissions in the United States. "As we transition to a fully electric fleet, we can expect an annual savings of approximately 230,000 pounds of greenhouse gases, and a reduction in air pollution," a Cap Metro spokesperson said in an email.

Beyond the buses themselves, the electrification of the fleet has required significant investment in charging infrastructure. Cap Metro uses both plug-in chargers and overhead chargers, which use pantographs on the buses' roofs, at its garages. The agency also will install chargers at park-and-ride locations, where the buses will be able to get some extra juice to stay on the road for longer stretches.

The Proterra electric buses currently in the Cap Metro fleet have a range of 160 miles, while the New Flyer buses' charge lasts 120 miles. But the vehicles on order and in production will vastly surpass those figures, with both reaching near 250 miles. A Cap Metro spokesperson said 66 new buses should join the fleet in coming months, and the new buses will feature prominently in Project Connect, which includes two additional MetroRapid lines planned to be all-electric. The east-west Expo line between Downtown and the Travis County Expo Center in East Aus­tin, and the north-south Pleasant Valley line between Mueller and Goodnight Ranch, should both be running by the end of 2023.

The rising prices, materials and labor shortages, and supply-chain issues that have vexed all infrastructure projects have slowed progress to some extent on fully electrifying Capital Metro's fleet. Both suppliers acknowledged that inflation in the price of components has driven up costs. A representative with New Flyer said supply­-chain issues for electric components have decreased production to "lower levels than those seen prior to the pandemic," even as demand for the vehicles continues to climb. New Flyer, which also makes conventional buses, says zero-emission vehicles will likely account for 20% to 25% of total deliveries this year, and closer to 40% by 2025.