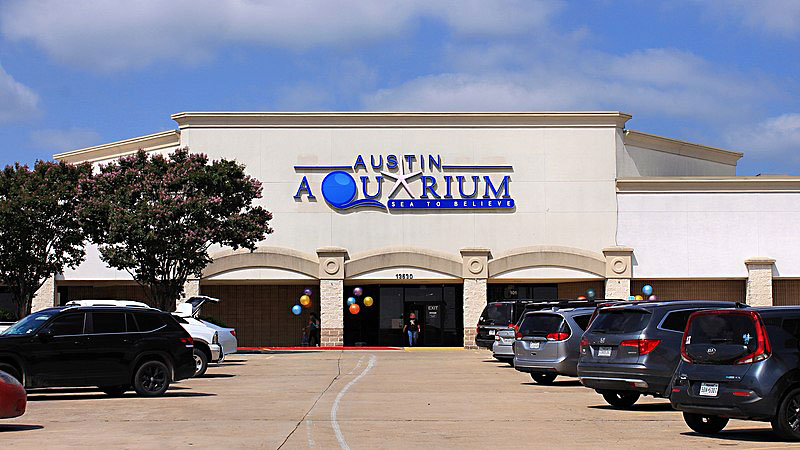 The Austin Aquarium is under investigation by the Texas Parks and Wildlife Department (Courtesy of Larry D. Moore)

The embattled Austin Aquarium is under fire once again from regulators, including the Texas Parks and Wildlife Department, after a scathing investigation report from People for the Ethical Treatment of Ani­mals earlier this year. From March to July, PETA's undercover investigator, who worked as an employee of the aquarium, documented a laundry list of animal welfare and worker safety violations, now detailed on the org's website. Among them are allegations of an iguana and several lizards abandoned in an alley, snakes misplaced, severe bites on employees, and more.

Michelle Sinnott, a lawyer for PETA, says, "There's a lot that's on full display for the public to see as soon as they walk in the doors of this facility, [and] there's a lot happening behind the scenes that is horrific and cruel." Sinnott said PETA has been tracking Ammon Covino (husband to Aus­tin Aquarium owner Crystal Covino) and the family's brand of "shady petting zoos/aquariums" for several years, and that Austin authorities should "slap" them with felony cruelty charges. PETA is also calling for the U.S. Department of Agriculture to terminate the Covino family's licenses, under the Animal Welfare Act, for its operations in San Antonio and Houston as well as Austin. Austin Aquarium's lawyer, Michael J. Smith, denies "any claim that any animal has ever been neglected or mistreated at [those] facilities."

This is not the first time PETA has sounded the alarm about Austin Aquarium, and last time, they were right. Ammon Covino, who opened the Austin facility with his brother in 2013, was convicted of wildlife trafficking at a Boise aquarium later that year and sentenced to federal prison. He then went back to prison for violating his parole in 2016 by helping other Covinos open aquariums in Utah and Nevada.

Although the Austin Aquarium is legally owned by Crystal Covino, in a letter to the USDA, PETA alleges Ammon is not only "openly referred to by employees as an owner," but is also involved in the transport of animals from Vince Covino's operation SeaQuest, which has many franchised locations around the U.S., including in Ft. Worth. Smith told the Chronicle that "Ammon Covino's role in the Austin, San Antonio, and Houston facilities is the design and construction of exhibits. He does not dictate husbandry practices or have any role regarding the animal encounters."

The USDA has cited the aquarium before for minor violations or "teachable moments" during routine inspections, and recently cited the San Antonio Aquarium for code violations related to potentially unsafe temperature conditions. Over the past few months, PETA has submitted requests for investigations to several regulators, including alerting Austin/Travis County Animal Control and the U.S. Occupational Safety and Health Administration in July to more than 20 lemur, kinkajou, capybara, and otter bites that aquarium leadership allegedly failed to report, and a letter to TPWD alleging that Asian vine snakes "go missing all the time."

In the OSHA letter, PETA alleges that employees are "regularly" attacked and that there are "intentional efforts to avoid reporting or documenting these attacks, which means employees may not be receiving appropriate diagnosis and treatment." In 2019, a local family sued the aquarium when a potentially unvaccinated lemur bit a child during an educational tour, after USDA vet inspectors documented improper barriers between the public and the animals.

In an email to the Chronicle, Smith denies many of PETA's specific allegations about the number of employee bites and the reasons for certain animal injuries; for example, he says, "While snakes have occasionally escaped, it has not been 'dozens' and none have been found dead anywhere. Any point of egress was promptly closed and secured." Some of the disputes may just be differences of interpretation; when we requested comment on an iguana that PETA alleged had been "put in a cage outside and left to die [for] three days," Smith responded that "a veterinarian … instructed the facility to place Igor in an outdoor enclosure to provide him with additional sunshine. Based on his advanced age, Igor passed of natural causes." Smith also disputes the validity of a video PETA compiled of undercover interviews with alleged employees, "as it has obviously been edited or manipulated … making it impossible for the Austin Aquarium to determine whether the individuals are actually employees or simply individuals PETA has recruited." But it's difficult to know what employees truly think, as AA requires them to sign nondisclosure agreements. (The Chronicle contacted several former employees, but none had replied as of press time.)

"If any of the agencies ever found an animal was neglected or did not receive adequate care, the animal would be removed or the facility would be shut down," says Smith. "Instead, these facilities continuously pass their inspections and have never had any animals removed." The USDA says PETA's investigation request is under review, and Chris­to­pher Mal­do­na­do, a wildlife permitting specialist with the TPWD, said that agency is currently looking into the claims: "If circumstances warrant, a full investigation may require significant time; what may appear simple can often lead to knowledge of activity warranting longer term scrutiny."