APD Protects and Serves Itself With Eighth Street Report 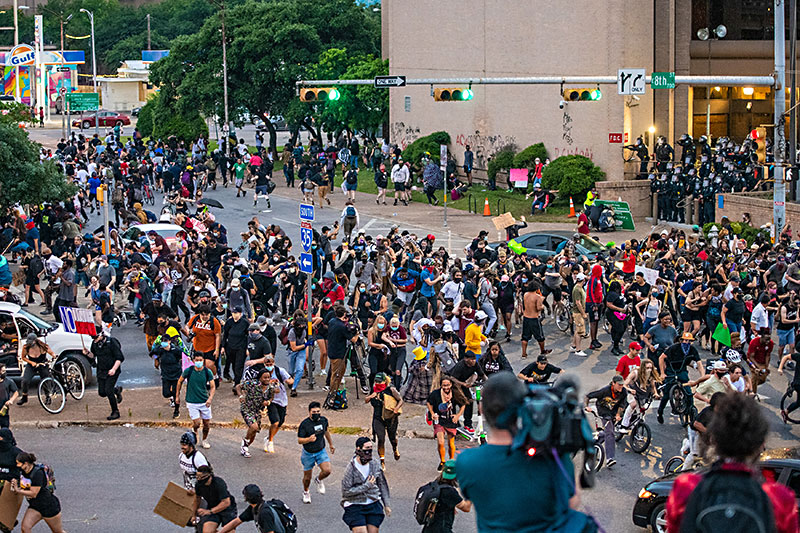 Demonstrators and police clash outside APD headquarters during the May 30-31, 2020, protests against police brutality (Photo by David Brendan Hall)

In his questions to Casar, Edwards sought to confirm something he already knew to be true – that city officials, especially then-Chief of Police Brian Manley, City Manager Spencer Cronk, and Assistant City Manager Rey Arellano (who oversees public safety), had been aware for at least 24 hours before Evans was injured that officers were shooting peaceful demonstrators in the head on Eighth Street. Casar had that confirmation.

The council member had heard reports of police violence throughout the day of May 30, he told Edwards. He texted Manley, Cronk, Arellano, Mayor Steve Adler, and others at 9:14pm that evening to describe the shootings of Brad Levi Ayala and Nikki Underwood, both hit with beanbag rounds that embedded in their bodies – in Ayala's case, in his forehead. According to the text chain obtained by Edwards, Cronk responded to Casar an hour later, telling him he would speak to Manley. Manley did not respond until 5:55pm the next day and didn't address the shootings and injuries.

Q: [I]t was your expectation that by providing notice of devastating injuries that you describe as unnecessary, that those people [the leaders of APD] would do something about it, right?

A: That's exactly why I sent the text.

Q: Did you expect them to shoot more people in the head?

A: No. I absolutely did not want more people to get shot.

Q: Do you agree that's what happened?

It's widely known, both among Austin police and their backers and among civil rights advocates, that Manley did not order his officers to stop shooting people in the head; even Austin Police Association President Ken Casaday has criticized the refusal to change tactics. This makes the self-evaluation by APD of its performance during the protests, released late last Friday, Sept. 16, all the more surreal.

The Austin Police Department Protest/Riot Event 2020 After Action Report emphasizes the malfunctioning of the lead pellet rounds and lauds the department for abandoning their use. "[T]he bean bag munition did not perform as expected, resulting in the unintended injuries," the report reads. "Once this became apparent, APD leadership explicitly prohibited the use of the less lethal (bean bag) shotguns demonstrating the Department's ability to adapt to evolving circumstances."

“Do I think police have learned anything from 2020 that will make peaceful protesters safe from police violence? Not really.” – Activist Kathy Mitchell

This is exactly the opposite of what Edwards, Casar, and others have argued – that APD showed it was not capable of quickly adapting when Manley didn't change tactics immediately after the May 30 injuries. "It is not that the beanbag munitions did not perform as expected during the protests, it is that APD did not perform as expected," Edwards told the Chronicle. "APD's leaders and the city's political leaders were expressly told that people were being seriously injured by these weapons and were given specific evidence on the first full day of the protest, yet despite this, APD's leaders authorized their continued use the following day."

It took department leaders until June 1 to forbid officers to shoot protesters with lead pellet rounds. By that point, May 31 had become the bloodiest and costliest day of protest in the city's recent history. Evans, Justin Howell, Sam Kirsch, Christen War­koc­zewski, Meredith Drake, Jose Herrera, Tyree Talley, Modesto Rodriguez, and others suffered serious injuries that day. Of the 21 officers indicted this spring, 15 face assault charges for actions on May 31. Of the $15 million the city has paid so far to settle lawsuits related to the Eighth Street shootings, $12 million has compensated survivors for APD's actions on that day. Christen Warkoczewski before having surgery on May 31, 2020, to repair damage from a lead pellet round (Courtesy of Jeff Edwards)

The report has several other themes: The department was unprepared for the size and ferocity of the protests; more training and integration of different forces within the department is needed; and de-escalation tactics must continue to be emphasized. But justice advocates are disgusted by what the report leaves out; there's no discussion of why officers shot at demonstrators' heads or fired at protesters like Evans who posed no danger.

Casar and his colleagues wanted to fire Manley after the protests, but Council does not have that authority; Cronk, who does, chose not to use it, and Manley later retired. Cronk and Arellano stood alongside current Chief Joseph Chacon as he released APD's report at a Friday afternoon press conference. Chacon, an assistant chief at the time of the protests, made an unflinching promise to the public: "I can promise you that we will never see another response similar to the one in summer 2020, the way we have changed our policies, our training."

As an observer of APD for over 20 years, organizer and grassroots lobbyist Kathy Mitchell has heard such claims before. "Police review themselves, find no wrongdoing," Mitchell said. "It's disappointing but not surprising that APD would issue a report justifying everything they did and making excuses for all their terrible management decisions while not mentioning any specifics about the hundreds of misconduct complaints lodged against officers.

"Do I think police have learned anything from 2020 that will make peaceful protesters safe from police violence? Not really."

Jeff Edwards agrees: "No one seems to be asking why the very highest levels of the APD and city let their officers engage in the systematic assault of people protesting against police violence. Until this failure of leadership is truly analyzed and addressed, any suggestion that a similar overreaction from APD will not happen again is wishful thinking and, unfortunately, cannot be taken seriously."