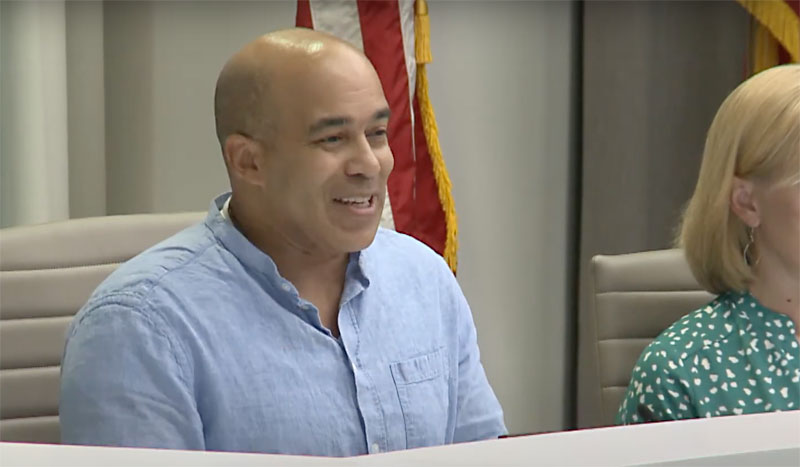 AISD Trustee Kevin Foster, who had worried that the bond might prioritize schools with wealthier students, said the final proposal was "absolutely responsive" to his concerns (screenshot via AISD)

Last Thursday, Aug. 11, the Austin Inde­pendent School District Board of Trustees unanimously approved the largest bond package in district history – $2.44 billion worth of equity-focused critical infrastructure improvements that will clock in at a 1-cent property tax increase if approved by voters in the Nov. 8 election.

At the board's work session Aug. 9, some trustees worried that AISD administration's suggestions to change the originally proposed $2.25 billion bond would be inequitable. The Bond Steering Committee had prioritized what they termed "equity by design" and proposed to modernize the majority-Black-and-Hispanic Northeast and LBJ Early College High Schools with at least $115 million each, but the AISD administration suggested reducing those to $60 million each. District 3 Trus­tee Kevin Foster worried this would take money "from Black and brown to white" schools to fund improvements like a fine arts space at majority-white Austin High. Two days later at the voting session, the steering commit­tee had added an additional $189 million to the proposal, which returned the original amount of funding for Northeast and LBJ while preserving the extra funds for schools such as Austin High and Bear Creek Elementary. Foster lent his "vigorous" support and said the new package "is absolutely responsive to conversations and hard work in the last 48 hours ... I am willing to bet that you have not seen such an equity-forward effort where the majority of our funds go toward Title I schools."

The revised plan includes $2.18 billion for campus improvements, including the phased modernization of five middle schools, with $157 million for Burnet Middle and $251.5 million for Travis High. Safety was named a top priority, with $10 million for districtwide improvements including upgraded locks and security fences; $75.5 million for technology upgrades and equipment; and $25.7 million for bus upgrades, including a commitment to electric buses as federal government funds are made available. It includes commitments to green infrastructure standards for buildings, worker protections, and $13 million for the Clifton Center, a career and technical education school. Several improvements to athletic facilities in turf and lighting include $25 million for Nelson Field.

The equity-focused bond package vote came four days before the Texas Education Agency released its ratings for the school district and each campus. While the district overall received a B, 10 campuses, including Mendez Middle School, did not receive passing grades. Superintendent Anthony Mays said that $250 million in the bond would address "critical deficiencies" at those campuses, such as poor air conditioning, the Statesman reported.

Despite this being the largest AISD bond ever, the new proposed property tax rate is actually the lowest AISD will have in eight years if approved, said Operations Officer Matias Segura. Several board members expressed hope that the bond money covering infrastructure improvements will leave more room in the budget for increased pay for teachers – though the final bond package itself does not include previously discussed affordable housing plans for teachers. All trustees expressed strong support for the package. District 1 Trustee LaTisha Anderson, who had raised similar concerns to Foster about the first draft, said of the final version, "I have never seen AISD bring forward such an equity-focused bond."

Ten AISD schools were listed as "Not Rated" in the recently released Texas Education Agency ratings – a label used this year instead of a D or F for schools that received an overall score of less than 70.