Via 313 Workers Unionized and the Whole Service Industry's Invited

A slice of the pie 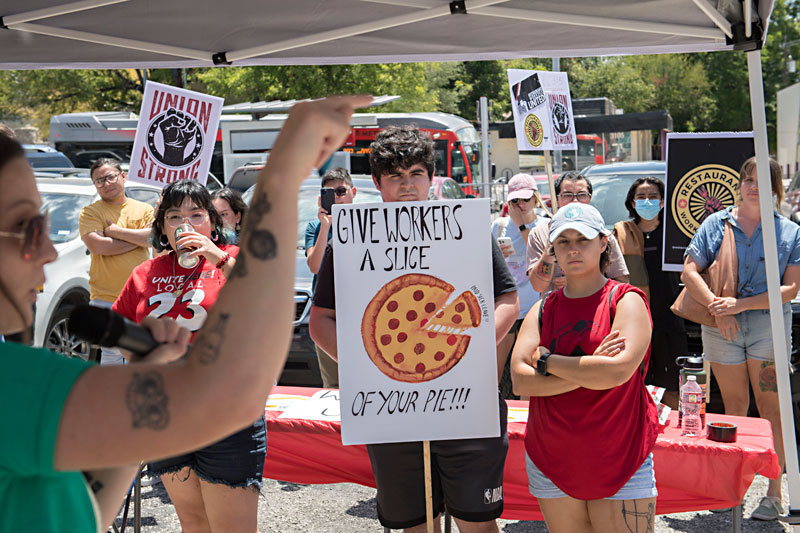 On Thursday, Aug. 4, over 75% of workers at three Via 313 locations – Oak Hill, East­side, and North Campus – filed a petition with the National Labor Relations Board to unionize. The decision comes after almost a year of behind-the-scenes organizing, spurred further by the company's COVID response.

At a rally on Sunday at the North Campus location, organizer Henry Epper­son, an employee since November 2021, told the Chronicle tensions with manage­ment came to a head during the Omicron wave "six or seven months ago. We were all getting COVID, we asked for hazard pay. The company said no" and suspended four workers who petitioned for better communi­cation of COVID protocols. Workers protested on Jan. 8 outside the north campus store – "We came out in full force and got them rehired." But since then, workers say, communication has fallen on deaf ears.

Instead of joining an existing union, the workers aim for the newly created Restaurant Workers United to be the restaurant industry-specific union for all: "There are a few restaurants that are unionized – hotels or airports that have larger contracts," explains Epperson. "But for us, just normal restaurant workers, we don't really have a voice to represent us. So we wanted to start our own."

In addition to COVID safety concerns, RWU intends to negotiate around issues with wage theft, scheduling, and benefits. "We're looking at our hours and it's not matching up, people missing hundreds of dollars ... consistently being over- and under­-scheduled despite numerous attempts to reach out to management." Union members say the company is more focused on franchising in Utah than preserving the work environment of their flagship Austin stores. "We brought these issues to them as individuals first and then we kind of realized it's better if we stand together, and now they're finally listening to us," says Epperson. JJ, an employee at the Eastside location, says the issues are endemic at the company. "Like my manager specifically, I think that they do a great job. A lot of this stuff is really just above them."

"This industry is something I've been around pretty much my entire life," says Epper­son. "So I've seen some of the good things. But I've also seen the darker side. There's definitely a lot of issues with exploitation. So I think we need to organize and fight for our rights within these jobs."