Texas Is Burning and There’s No End in Sight, Yet 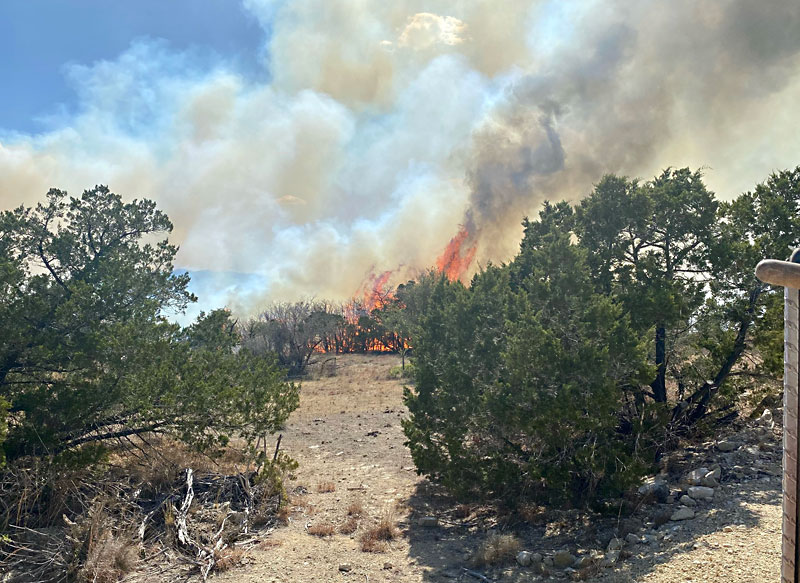 As Travis, Hays, and Blanco counties remain in severe to extreme states of drought, the number of brush fires and wildfires raging is hard to accurately count. Since last Tuesday, Aug. 2, three large wildfires and countless smaller brush fires have burned thousands of acres, causing evacuations and destroying properties around the Austin metro area. Most of those fires are 95%-100% contained as of press time, but new ones are starting all the time. Multiple task forces with firefighters from all three counties fought the fires along with the Texas A&M Forest Service and Texas Army National Guard.

The Smoke Rider fire in Hays and Blanco county burned 1,210 acres, jumped U.S. Highway 290 near Dripping Springs, closed down that highway and FM 165, and caused evacuations including that of 50-plus dogs and cats from the PAWS Shelter of Central Texas. Pedernales Falls State Park closed temporarily on Aug. 3, and according to Blanco County emergency managers, Smoke Rider burned seven homes along with barns, vehicles, and other equipment. The Hermosa fire in Hays County, so far having burned 44 acres, forced people to evacuate their homes off FM 3237 and River Mountain Road on August 4. The Blue Bluff fire – the closest to Austin, in eastern Travis County – burned 60 acres starting July 29 and on Aug. 2 breached containment lines, causing the Texas Music Ranch to evacuate. The Big Sky fire, sustained by 25 mph wind gusts in Gillespie County near Fredericksburg, burned almost 1,500 acres south of Enchanted Rock State Natural Area, which also had to close for a time – and these are just the ones large enough to be named. On Tuesday, Aug. 9, alone, the Forest Service responded to 26 wildfires for 1,276 acres in the state.

Though the ongoing drought is making conditions worse, 90% of wildfires in Texas are caused by humans, according to the Forest Service. Half start with either debris burning (which shouldn't be happening due to widespread burn bans) or equipment such as chains dragging when pulling a trailer, which sparked the Blue Bluff fire on July 29. Discarded cigarette butts don't help, says the Austin Fire Department. A small reprieve may come this week in the form of slight rain chances, but Texas remains in a severe and long-lasting drought, with "no long term improvement in fuel dryness anticipated," according to the Forest Service.