Local Roller Derby Community in a Jam Over Extreme Heat 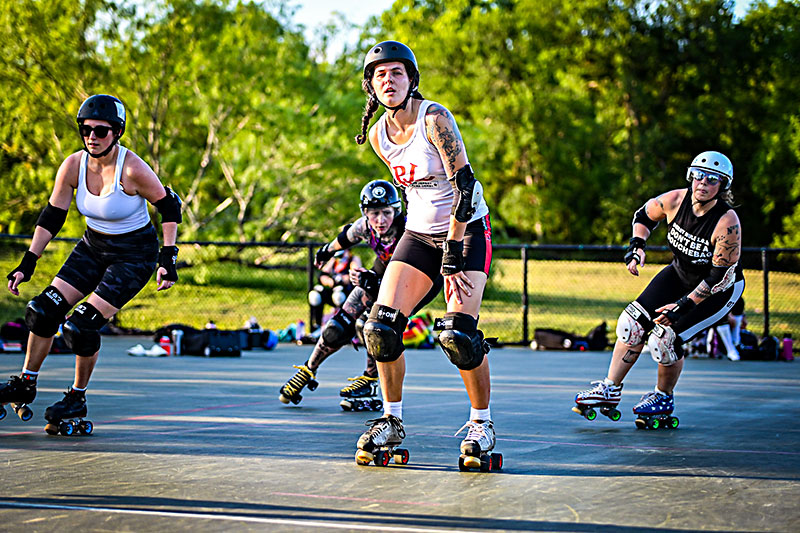 Modern-day flat track Roller Derby began right here in Austin back in 2002 as a group of women came together to resurrect the sport. Many hundreds of leagues now exist worldwide, with Austin boasting a total of four flat track leagues: the Texas Rollergirls (currently ranked eighth in the world), Austin Anarchy, Bat City Rebellion, and Violet Crown Roller Derby, each consisting of between 50 and 100 skaters.

Roller Derby came to an abrupt halt during the pandemic but interest has been steadily rising. Also rising? Extreme heat in Austin. It's turned into a health risk for local skaters, who heavily rely on the city's outdoor practice space at Bartholomew District Park on 51st Street near Mueller.

"I don't want to complain because we're the only city I know of that provides a public Roller Derby track for practice year-round," said Janet "Panda Moanium" McLaren, skater for the Texas Rollergirls. "But Bartholomew Park is a tiny little park, there's like 15 parking spots, the track is in the full sun, there's no shade, no bathrooms, no water."

The track, about 110 by 120 square feet, is in constant use. "There are numerous leagues that use it regularly for scheduled practice, but then there are also individual skaters who are out there all the time, there's rec leagues, and junior leagues," McLaren said. "There's going to be somebody skating there at almost any time of day."

That's included triple-digit heat most days this season, with ground temperatures on the concrete track even hotter. "It's hotter this year than it ever has been and I would say it's just going to keep getting hotter," said Alexandra "Joliet Jane" Scarpello, skater and vice president of Austin Anarchy. "We've been watching our skaters get sick, get heat stroke, have to take a week off practice in the middle of a competitive season because they can't handle the heat … watching everything go down this year I thought, 'Not on my watch. We need to do something.'"

So earlier this year, Scarpello created a petition asking the city to provide a shade covering at Bartholomew for the safety of the skaters. Over 500 people have signed the petition, and Scarpello and other skaters have spoken with the city's Parks & Recreation Department, along with City Council members. Skater Johee "Yellow Fever" Chung spoke at last week's City Council budget work session. "I'm asking the city to apply capital dollars to build a shaded structure for the outdoor track," she told Council. "We've had skaters pass out, suffer from heat exhaustion; I myself have vomited at more practices than I can count during this heat wave."

Council Member José "Chito" Vela, whose District 4 includes Bartholomew Park, said he's very familiar with the track. "Let's see what we can do about a shade structure," he said. "Honestly at this point, for our city parks to be usable from April to September you need shade structures at the playgrounds and at different events."

Scarpello said that while PARD has provided her with good information, there's been no commitment to fund a shade structure. McLaren said the cost would be somewhere between $130,000 and $160,000, based on a quote skaters got from a local metalworking agency. "Generally speaking the response I get is, 'We're not interested in spending money on that, but here's all the information you need to reach out to the people who give the best grants.'"

A PARD spokesperson told the Chronicle that staff is reviewing the proposal's cost and feasibility and will reach out in the coming weeks to schedule a site visit, though it's important to note that "there is no City funding earmarked for this project" and "the group needs to fundraise for it."

The Roller Derby community has tried fundraising, but it's proven largely unsuccessful, Scarpello said. "We're five leagues of multiple volunteers that have league jobs, that have real jobs, that have second jobs, and we have a lot of low-income people," she said. "So it's not like we have the time to be sitting around doing full-time grant writing."

Skaters used to have reliable indoor spaces to use on the hottest days of the year. But rising property values have priced them out. "This year we lost a lot of those indoor spaces that we used to call home because everything's gotten more expensive," Scarpello said. That leaves Bartholo­mew as one of the only options for the hundreds of local skaters needing to practice. "So we're kind of in this position now where we have nothing," Scarpello said. "We don't even have the bare minimum of accessible opportunity, no warehouse, no rentable space, it's really bad."

Roller Derby is a cultural institution in modern Austin, Chung noted: "The pandemic decimated Roller Derby and we are trying to rebuild the sport that was born right here in Austin, Texas." Climate change will continue to impact outdoor playing conditions, she added, so the skaters' long-term goal is to create an indoor space, as extreme weather makes even shaded outdoor practice dangerous.

McLaren agreed: "As the climate gets more unpredictable, it gets harder and harder to rely on an outdoor place for practice." But for the meantime, a shade structure for the outdoors would be a step – or a skate – in the right direction.