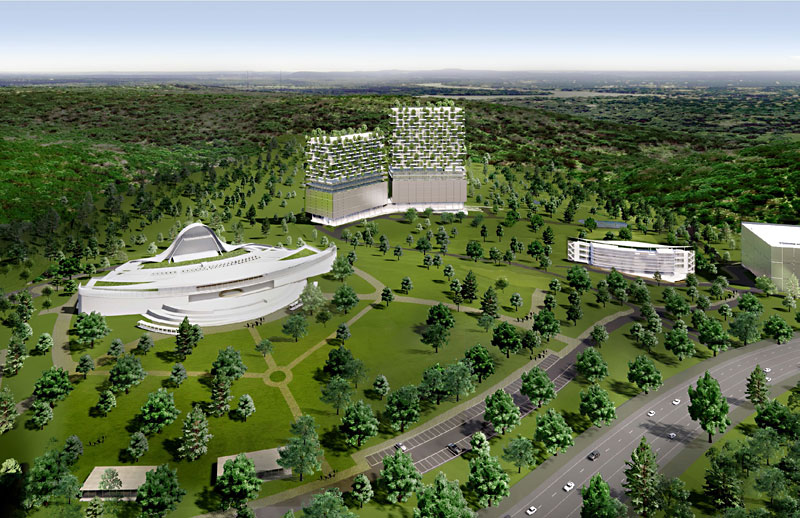 The Violet Crown Amphitheater, a planned development including condos, offices, and a 20,000-plus-capacity music venue off Highway 71 in Southwest Austin, has claimed it is still "proceeding." But months after developer Craig Bryan and his team withdrew their request for Austin Water service, no alternative strategy for water and wastewater has been confirmed that would allow the controversial project to proceed at the size and scale it had intended.

Back on February 16, the city's Environ­mental Commission blocked the developer's request to extend Austin Water's pipes out along Hwy. 71 to the proposed site near the intersection with Southwest Parkway. Despite testimony against the proposal by the Watershed Protection Department, several environmental stakeholders, and neighborhood associations near the proposed site – which referenced potential damage to Barton Creek tributaries and the nearby golden-cheeked warbler habitat – developer Craig Bryan maintained that he wants "to make this a crown jewel of how to do something right, especially from an environmental standpoint."

During the presentation, Bryan stated that the development has already secured a 12-inch drinking water line from Austin Water and is only missing the extra water pressure required for fire safety. With regard to wastewater, Kaela Champlin with Watershed Protection outlined one possibility the developers could pursue: a Texas Land Application Permit from the Texas Commission on Environ­mental Quality. A TLAP would require roughly 30 acres for wastewater irrigation.

“I don’t really see how you can scale down what they were trying to do.” – Mike Clifford of the Greater Edwards Aquifer Alliance

There are steep slopes on the property, which Champlin claimed would limit the amount of suitable wastewater irrigation sites. Bobby Levinski, speaking on behalf of a nearby landowner, added that dirt would have to be brought in to achieve the 30 acres, which would increase erosion. "Based on this," Champlin concluded, they "would not be able to develop with the same level of intensity."

Bryan responded that they already have the 30 acres in place and that the property is a "fairly flat area" generally, suggesting their next step may be the TLAP. Jim Witliff, the developer's environmental consultant, mentioned different options: seeking wastewater service from a different provider or building an on-site septic system, though "either of those options have a higher probability of polluting Barton Creek than the one that we've asked for." Wastewater providers serving Bee Cave, Lakeway, and Cedar Park all confirmed that there have been no permit requests for the Violet Crown project. In regard to on-site wastewater treatment, Witliff added, "If we're using a large portion of the net site area for irrigation, the project is probably going to get scaled down, and some impacts of the project might not end up being built." Mike Clifford of the Greater Edwards Aquifer Alliance told the Chron­icle, "I don't really see how you can scale down what they were trying to do. [On-site wastewater treatment] would work for maybe just one of those condos, it wouldn't work for the whole entertainment complex."

Confirming that the finished product will look different than the original plans for Austin's answer to Red Rocks Park and Amphitheater in Colorado, on Monday, June 27, Christine Haas, a spokesperson for the developer, told us, "With some changes the project is possible and is proceeding, but we have no detailed update for you at this time."

A version of this article appeared in print on July 1, 2022 with the headline: Rocky Road to the Violet Crown