Will the Uvalde massacre blame game drain all the energy from firearms reform?

Both the Republican Party of Texas platform adopted last week and Ken Paxton in one of his endless self-promoting press releases (him and Ted Cruz, peas in a pod) this week refer to their "God-given" right to defend oneself with one's choice of weapons. I know the gap between professed conservative piety and actually reading the Bible is wide, but which god do they mean? Surely they've heard of the Ten Commandments and the Sermon on the Mount. But even that aside, read the room, people! Nobody wants to hear from the gun addicts and their enablers about how important it is that the right to slaughter children in Uvalde shall not be infringed. Especially when lots and lots of supposed good guys with guns – armed and trained law enforcement officers who are supposed to have a monopoly on justifiable violence – stood around and did nothing because they feared for their own lives more than for those of small children and their teachers. Right now, those cops' employers and defenders are competing in the Stanley Cup of blame games, even though it could and should have been the mission, to which they have sworn an oath as peace officers, of any one of those officers to open an (unlocked?) classroom door at Robb Ele­mentary and change the course of events. They have all been trained, for decades, to move quickly and to get in between shooters and their targets. They all failed; it is pointless and irrelevant for now how much one failed over another. Years from now, an inevitable surge of civil suits may apportion liability among the bad actors, but they are all responsible for people being dead, and their God should be pricking their consciences to seek forgiveness.

The Ways of Older White Men

The two stars of the current Punch and Judy show – Texas Dept. of Public Safety chief Steve McCraw and Uvalde Mayor Don McLaughlin – are both older white men and petty to a T, as are the activists who demanded the Texas GOP deem all gun control blasphemous, among many other wild ideas. Those same folks damn near booed their senior U.S. senator off the stage for actually negotiating with Democrats on a federal response to Uvalde, even though that plan is weak sauce that does almost nothing to reduce the availability of dangerous weapons. Here in Texas, state leadership has promised a mostly identical course of action – mental health! hardening the schools! – but without committing the sin of working with Democrats to do so.

The GOP is broken, and the state of Texas is broken. Their incentives have nothing to do with good government or solving problems or responding to the will of the broader public.

The GOP is broken, and the state of Texas is broken, because of Fox News and other conservative media, who have more influence as independent actors in a party coalition than has ever been the case in modern American politics. Their incentives have nothing to do with good government or solving problems or responding to the will of the broader public, and partisans have learned that lesson well.

But how hard would it be to simply say that America and Texas have too many guns and we should think of ways to create incentives to lessen that number? Your local police chiefs will agree. What would be the blasphemy in simply offering a voluntary buyback for people who are willing to part with an AR-15? This is what Beto O'Rourke has actually proposed, which is not what he said in the heat of the moment after the El Paso massacre, which Fox News et al. have seared into the GOP's memory.

Let’s Not Get Distracted

Since Texas is broken, any real progress on this front is going to have to come locally. This will set up more inevitable conflicts with the Lege, but let's say a city or county partners with a nonprofit who uses nontax dollars to buy back guns. This would be a natural outgrowth of work being done by Austin's Office of Violence Prevention and similar efforts in other cities. Even some moderate Republicans (say, Ft. Worth Mayor Mattie Parker) could get on board. If we're serious about treating gun violence as a public health emergency, then this and other harm reduction efforts should be pursued even if they make the Texas GOP sad.

O'Rourke is still running behind Gov. Greg Abbott, but by a much smaller margin than he was before Uvalde. It should be in the whole state's interest to not let Abbott and his party change the subject and to not stand for the framing of Uvalde as a "tragedy" – that is, inevitable, an act of God, the same God who gave us the right to soothe our wounded older-white-man insecurities with deadly weapons. We – and this especially means my non-Fox media colleagues – should demand that firearms reform be the main issue defining the home stretch of the campaign. Unfortunately, every day that we spend talking about what went wrong and who effed up and who should be punished for the police meltdown at Robb Elementary is a day we're not making progress on firearms reform. Too much of the Texas press corps is chasing gossip and laundering leaks about what happened, rather than asking the harder and more important questions about what happens next. And that's how the best opportunity in a generation to turn the tide on gun violence may slip away. 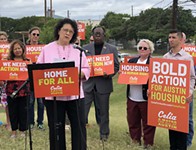 Austin at Large: Housing and the Mayor’s Race
Celia Israel: “This election is about who can afford to live here, and who gets to decide”