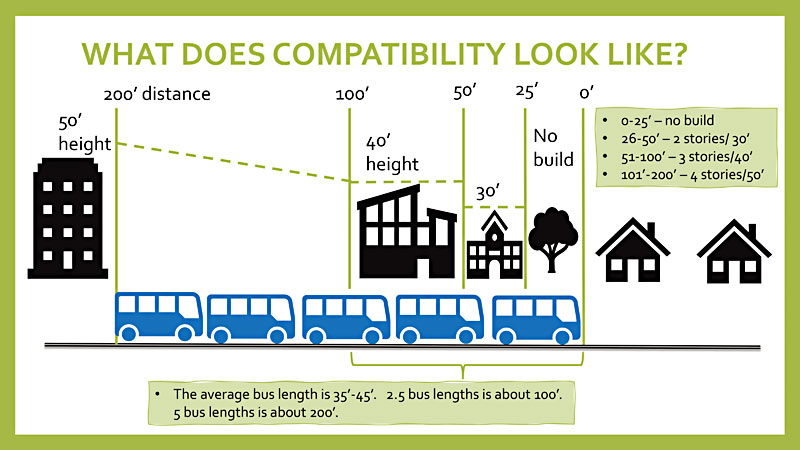 Compatibility Standards in a Nutshell: Any property that's either zoned or used as single-family (on the right of this graphic from the city) controls the height of nearby commercial properties. These must be at least 200 feet away before they can go up to 50 feet tall – that is, taller than the 30- to 40-foot norm for SF properties. The proposals being discussed at Council would adjust both the allowable heights and the distances from single-family that trigger the standards. (Credit: Christine Barton-Holmes, Development Services Dept., City of Austin)

Brace yourselves for a long one, Council members, because you've got a lot on your plate today. Aside from a typical agenda – that is, packed with 95 items that are either critically important, or mundane, or usually both at once – you have set for yourselves not one but two emotionally fraught "Council discussions" on the Land Develop­ment Code, complete with public comment sessions on each that are sure to be impassioned and sharply divided, as you at long last dig into the hard work that's stood seemingly at a standstill since the wreckage of CodeNext just about two years ago.

The watchwords now are "consensus" and "low-hanging fruit," because everyone seems to agree that 1) there is a lot about the LDC that doesn't work well, and 2) there are a lot of fixes that seem logical and largely noncontroversial. And the hope is that if CMs can work through some of those things they can all agree on, perhaps the tougher questions will become easier to find answers to.

Both of the proposals being discussed today pertain to properties directly along major roads and transit corridors. And while that's a small percentage of the city's land area, it's a large proportion of the potential for growth, and also has a disproportionate impact on the lives of the citizens; these are the streets everyone uses to travel to workplaces and college campuses, shops and restaurants, and services. If we can get land use right in these places, the right answers for the rest of town might follow more easily. Thus far, CMs have seemed to take the task at hand seriously, though that's relatively easy when you're still talking in hypotheticals.

The first proposal has to do with properties zoned for vertical mixed-use, a classification designed to encourage urban-style development by allowing things like greater height and lesser setbacks from property lines, in exchange for the developer including on-site affordable housing, public space, and other public amenities. It's been pretty successful – the city's "most successful affordable housing program," though that's not saying an enormous amount – but there are technical flaws that limit the usefulness, and CM Ann Kitchen brought forward a proposal to tweak the current program and add "VMU2," a sort of VMU on mild steroids that could be applied in more places, which everyone liked. It seemed poised to pass, until CM Chito Vela wanted to add provisions to eliminate all parking requirements for VMU buildings, and to eliminate all compatibility requirements that come into play when a project is next to a neighborhood of single-family homes. These were clearly not consensus proposals, so VMU2 was pulled down for further discussion, restarting tonight as Item 48.

But meanwhile, those concerns about parking and compatibility spun off into another proposal, separated from VMU2 so that one could move ahead, but also broader in that it aims to address all the properties along the city's major corridors, not just the parcels that have VMU zoning, which when the program was created involved buy-in from neighborhood plan contact teams. An informal committee comprised of Mayor Steve Adler, Mayor Pro Tem Alison Alter, and CMs Vanessa Fuentes, Leslie Pool, and Paige Ellis presented the framework of this proposal for the first time at the May 17 work session, with apologies for not even having anything on paper at that point (there was a dry-erase marker board, which didn't read all that well on ATXN). The five got a "Draft Proposal on Compati­bility and Parking on Corridors" up on the Council message board by late afternoon, and it's an admirable start, trying to balance the needs of competing stakeholders, with at least a promise to take local conditions into account, and a mix of pain points for both sides. You can see the full proposal posted with this column online.

But that's just the starting point for the discussion, and the tug-of-war over the number of feet here and the percent of impervious cover there is where things typically start to go sideways, and people start yelling and not listening. That's Item 49, god help us.

Neither item is posted for action today, but expect VMU2 to be back pretty quickly unless it gets gummed up again. The broader discussion might be ready for action in the fall, if all goes well.

The next Project Connect working group meeting will focus on the South Shore Working Group area, including proposed Blue Line rail stations at Waterfront, Travis Heights, and Lakeshore. It's via Zoom at 5:30pm Thu., May 26. Go to projectconnect.com/get-involved to register and see the library of presentations from past meetings.

This Friday, May 20, is Bike to Work Day nationally and at dozens of fueling stations around Austin that are offering free coffee, snacks, and encouragement from 7 to 9am. Or hit the Austin City Hall Mega Station, 8-9:30am, for tacos and promo giveaways from the city and various mobility partners. See ghisallo.org/blog/bike-to-work-day-atx-2022 for the list. You can also rent a MetroBike for free using promo code B2WD2022.

The ULI Austin May Breakfast will feature a discussion on the planned Austin Convention Center Redevelopment, where plans to more or less double the available space have been greatly in flux ever since the pandemic hit. Hear the latest from the Convention Center director and the head of Visit Austin next Wed., May 25, from 7:30 to 9am (discussion is 8-9am). It's in person at the Austin Public Library ($20-75), or virtual on Zoom ($0-30); register at austin.uli.org.

There once was a contest in Brush Square

For folks to write limericks most fair

About Texas or Austin

It's not that exhaustin'

But it does have to rhyme, ideally.

If you can do better than that, you should submit your efforts to Lone Star Limericks, which will be accepting original submissions pertaining to Austin or Texas beginning May 22 at woobox.com/ieunzb, for eventual publication on Brush Square Museums' website. Can't wait. 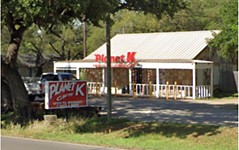 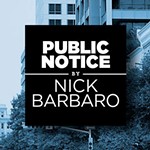