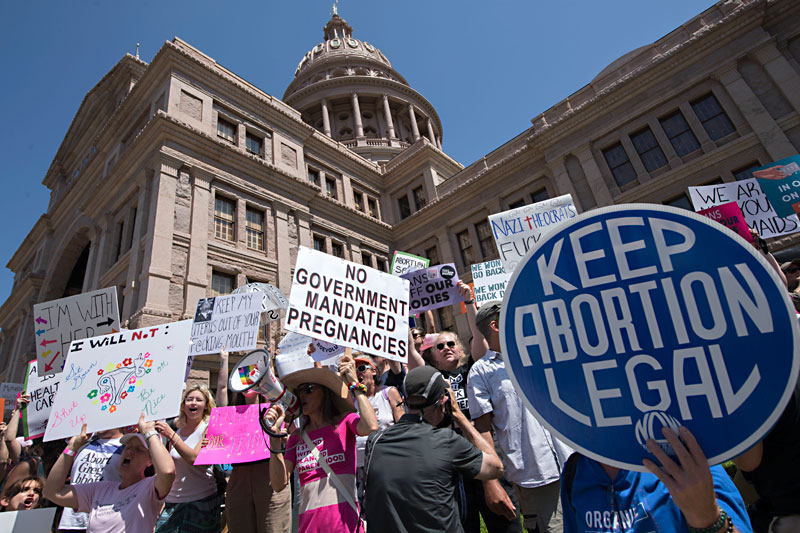 Austinites continue to protest the leaked Supreme Court decision that would overturn Roe v. Wade with the Bans Off Our Bodies rally at the Texas state Capitol on Saturday, May 14 (read more) (Photo by John Anderson)

Formula Famine: A baby formula shortage, caused by a one-two punch of supply chain issues and a recall, has frightened families across the country. However, rumors repeated by Gov. Greg Abbott and other conservatives that the Biden administration is sending tons of formula to the border for migrants are not true. Detention facilities regularly stockpile supplies and there is no evidence of an increase in formula supplies, according to PolitiFact.

Austin Moms Step Up: Meanwhile, postpartum Austin women are coming out of the woodwork to donate to Mothers' Milk Bank, Austonia reported. Donors had been on a 30% decline since 2021 until the shortage sparked community interest. More than 90 prospective donors have contacted the bank in the last few days.

Headless Horseman, the Remix: Autonomous vehicle tech company Argo AI has brought its driverless platform to Austin to test out ridesharing and grocery delivery services. Company employees will be the first to use the integrable autopilot tech, but soon the company will be running tests with Lyft and Walmart (with a human safety operator on board). The test fleet will use the Ford Escape Hybrid and VW's all-electric ID. Buzz.

Get There Eaaaarrrrrrllly: The mammoth lines at security checkpoints at Austin-Bergstrom International Airport are back, baby! Saturday, May 14, saw about 24,000 passengers move through AUS, most of whom were stuck in security lines for two hours or more. The Transportation Security Administration's AUS staffing crisis persists, mostly due to TSA's low wages.

Whoops! Dropped Your Social! Personal information, including Social Security numbers, of 1.8 million Texans who filed claims with the Texas Department of Insurance was left exposed to the public for nearly three years, according to a state audit released last week. TDI responded with a public notice that it addressed the issue earlier this year.

Cycling Star Killed: Moriah Wilson, a 25-year-old gravel racing star who went by "Mo," was shot and killed Wednesday, May 11, in East Austin, near Chestnut Avenue and East Martin Luther King Jr. Boulevard. Wilson was visiting ahead of a race just south of Ft. Worth. APD have identified a person of interest. "This event was committed by a sick, demented individual who was fueled [by a] daily diet of hate."