The crisis is now 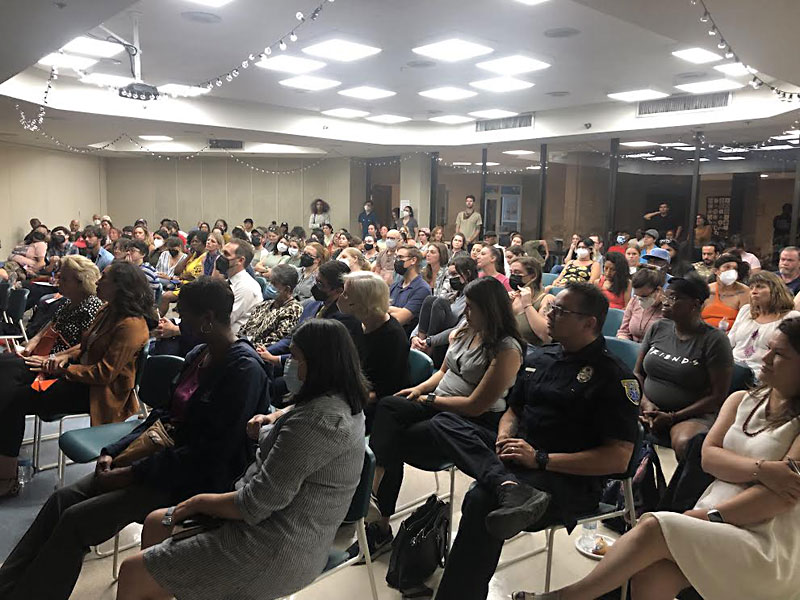 In a packed room at the First Baptist Church of Austin last week (May 3), more than 100 attendees – including city and county elected officials, physicians and medics, and homeless outreach workers – discussed the critical need for local harm reduction policies amid a rapidly worsening opioid overdose crisis.

Texas Harm Reduction Alliance, the event's nonprofit sponsor, has only been around since 2019. Since then, the U.S. Cen­ters for Disease Control and Prevention estimates, thousands of Americans have died each month of opiate-related causes – 100,000 from April 2020 to April 2021 nationally, up more than 28% from the year before. Austin has an even more dire problem: Locally, fentanyl­-related deaths increased 237% in the same period.

Throughout the two-hour town hall, THRA Director Cate Graziani, Organizing Director Paulette Soltani, and current and former drug users and outreach workers explained harm reduction as a concept, what it looks like in practice, and why it needs funding and support from the city of Austin and Travis County, "or those numbers are going to continue to go up," Graziani warned.

Currently, THRA operates a drop-in center, a mobile health clinic, and a street outreach team that supplies drug users with safe tools like clean syringes, sterile water, and alcohol pads. Most importantly, their survival kits include Narcan (naloxone), the fastest and most effective self-administered antidote to an opioid overdose. Due to a nationwide shortage of Narcan, THRA's survival kits have gone up in price, though they are still less than $20. Austin police and medics carry Narcan, which is available at Walgreens and CVS for around $75. Austin Emergency Medical Services' Opioid Emergency Response program, begun in 2018, follows up with overdose patients to offer support services and treatment. The multi-agency Community Health Paramedic team – including personnel from EMS, Integral Care, the Austin Police Department, and Downtown Austin Community Court – and CommUnityCare's street medicine team serve unsheltered Aus­tinites, which is made more difficult as sweeps of encampments make it harder to stay in touch with patients.

Matt Hunt, a nurse practitioner and longtime street medic with CommUnityCare, says he's never seen so many patients die. "I can prescribe Narcan, but I can't give it out to the [other] people in the camp who are going to save that person's life," he said, because they're not his patients, which raises liability concerns. Increased access to Narcan through city channels other than EMS or APD – so drug users can have it on hand before calling 911 – has been a longtime goal of THRA. (A city spokesperson told us Tuesday that Austin should be getting some funding from the $1.2 billion settlement reached by the state against opioid makers; that agreement includes $75 million worth of Narcan for Texas providers.)

THRA has been lobbying Travis County commissioners for a year to make methadone, an opioid dependence treatment, available through Central Health's Medical Access Program, which provides safety-net care to the poorest county residents. If approved by the Commissioners Court, methadone will be covered by MAP between July and September of this year. Copays are still being determined based on next year's budget, on a sliding scale based on income of individuals at or below 200% of the federal poverty line; patients will not be refused service for lack of payment.

Austin EMS Commander Blake Hardy explained that fentanyl, an opiate 50 times stronger than heroin, is what's behind the overdose surge. In spring 2020, "we started to see a significant shift in overdoses from heroin … to pills" that have been cut with fentanyl. "So you have people who are buying Xanax" – a non-opioid sedative – "that are used to taking two and being fine. Their body's not used to opiates, and two of these can stop their breathing in minutes." Most of those people are teens.

Increased access to Narcan through city service channels other than EMS or APD – so drug users can have it on hand before calling 911 – has been a longtime goal of THRA.

The town hall took an intensely personal tone thanks to testimony from current and former drug users. Matt Alves, an outreach worker with THRA in recovery, described the danger and stigma he faced as an IV heroin user without access to such harm reduction resources as needle exchanges: "Having to share the same dull syringe over and over again, pretty much everyone I used with had hep C." The first time Alves went to the hospital for an IV complication, the doctor put Narcan into his IV drip, "which, if you're not overdosing, sends you into precipitated withdrawals and you get, like, violently ill. They had two cops come over and taunt me, like, 'I bet you're gonna think twice before you do drugs again.'"

Emotional testimonies like Alves' underlined the urgency to act, and near the end of the two hours, Graziani and Soltani asked the assembled elected officials if they would commit to declaring a public health emergency, which Graziani said would allow "immediate access to funds. … We have seen in other areas during an emergency, we can authorize certain service programs to save lives." On May 11, County Judge Andy Brown said he's "exploring the declaration of a public health crisis" and expressed his support for expanded access to Narcan and for recovery programs to be "fully funded to eliminate wait lists."

Though officials were moved by the testimony – including Austin Public Health Director Adrienne Stirrup, who said she "has her marching orders" – some said their hands might be tied by the state. (For example, fentanyl testing strips, which could distinguish those contraband Xanax from safer medications, are illegal under Texas law.) "We have struggled as a team to find the resources at the scale we need," said County Commissioner Ann Howard, who before being elected in 2020 led the Ending Community Homelessness Coalition. "I never want people to think it's that easy – that if we declared an emergency, money falls in our laps or something."

Stirrup added, "I hate to mention it because I don't want to discount what anyone has said. But from a grantmaking perspective, when we look for other dollars, just looking at the data, it's not enough of a problem [and] we were not eligible for funding in the past. But the more information that we can gather as your public health department, the better we can define the problem, and get the attention and resources we need."

Frustrated reactions from outreach workers followed, and Soltani ended on a note of polite but dogged pressure on elected officials: "One of the reasons we wanted to do [this town hall] was because we were frankly frustrated that a lot of conversations … didn't have the voices of people who are impacted by the drug war, by homelessness, by mass incarceration. We hope we don't have to continue these conversations at town halls, but can also have them inside City Hall and Commissioners Court as well."

Or, as Alves ended his testimony, "It was 100,000 people who died last year, and like, I don't know – my question to politicians and policymakers is: When is enough enough?"