Moderates win down the ballot against far-right challengers Council Member Jim Penniman-Morin, who focused his campaign on alleviating Cedar Park's terrible traffic and improving service at its municipal utilities, took about 60% of the 6,760 votes cast in the mayoral race to succeed Corbin Van Arsdale. He faced two contenders to his right; former CM Mike Guevara took about 25% of the vote, while the most Trumpian candidate in the race, Claudia Chavez, garnered 15%.

In the two-candidate contests for Places 2, 4, and 6 on the at-large city council, the members seeking reelection each beat their respective MAGA challengers with just under 70% of the vote. CM Mel Kirkland won his third two-year term in Place 2 against challenger Collin Klein (the kind of conservative who publicly uses the word "commies" to describe Austinites). Klein has now unsuccessfully run for council twice. CM Eric Boyce, previously chair of the city's planning commission, successfully defended his Place 4 seat against Army vet and former CM Dorian Chavez (husband of mayoral candidate Claudia Chavez). In Place 6, Heather Jefts thwarted the comeback attempt of the local ringleader of this bunch, former CM Tim Kelly, who was censured by his then-colleagues for his right-wing antics, including disrupting LGBTQIA events at local libraries (and handing out Bibles) and defying the city's own COVID restrictions from the very start of the pandemic.

The winning candidates focused their campaigns on the basics, including the kinds of investments that voters also approved Saturday. The three propositions in the city's bond program, which dedicate $86.6 million to transportation projects, $42.2 million to parks and recreation, and $30 million to public safety, each passed with around 70% of the vote. 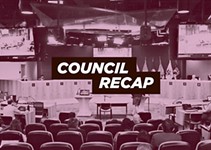