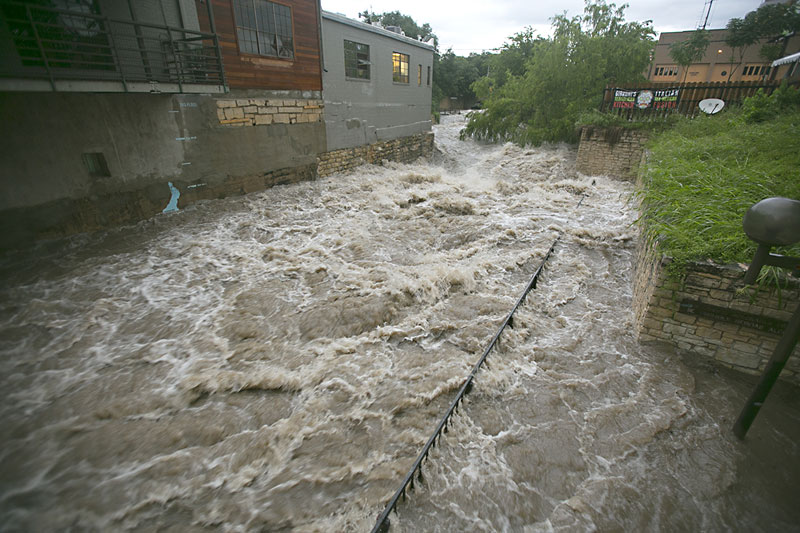 The Memorial Day Flood in 2015 (Photo by Jana Birchum)

As climate change raises temperatures and rainfall across the U.S., recent studies suggest that current flood mapping has not accounted for that increased risk. Flooding will increase by around 30% by 2050 in metro areas like Austin, spurred by increased population and development. In acknowledgment of that, the first statewide flood plan in Texas history is underway, with a draft due next January; the final plan will be adopted Sept. 1, 2024.

In 2019, the legislature directed the Texas Water Devel­op­ment Board to create 15 flood planning regions based on river basin boundaries, following the same ground-up process as state water supply planning. Each region's group, made up of stakeholders from cities, counties, utilities, river authorities, and the public, compiles information about the region, modeling and mapping its flood risk within the 100-year floodplain. Austin lies within Region 10 (Lower Colorado-Lavaca), an area the size of West Virginia, encompassing 43 counties. While only roughly 2% of Austin lies within the floodplain, 10% of Region 10 does, and there are recommended studies, strategies, and projects underway to mitigate flood risk for the roughly 2.9 million people projected to reside in the region by 2050.

Mike Personett, project manager with Halff Associates for Region 10, says that at this stage what's required is studies more than anything else – 172 for Region 10 – and once flood patterns are determined, strategies and projects to mitigate risk will be recommended. "Strategies" include anything from public outreach and education to helping communities adopt regulations that make them eligible for the National Flood Insurance Program through the Federal Emergency Management Agency, a key goal for Personett. "Of the people that are eligible and probably should have flood insurance, something like 10% actually have [it]." "Projects" can be structural, such as bridges, culverts, and storm drains, or nonstructural, such as expanding regional warning systems or property buyouts. Some structural projects recommended for Region 10 are low-water crossing improvements in Bastrop County, storm drain improvements in Austin, and subdivision drainage improvements in Travis County. "Flooding is a natural phenomenon; it's kind of old-school to think about controlling floods," says Personett. "Now, it's more about how do you manage and reduce risk" to buildings in the area.

Personett says structural projects are often costly, have adverse environmental impacts, and are difficult to get permitted. One common nonstructural alternative is property buyouts such as at Onion Creek, where, after disastrous flooding in 2013, the city of Austin acquired around 800 homes in the creek watershed. Buyouts like this are becoming more common, says Personett, due to homes being built before modern regulations and without knowledge of high-risk areas – something this statewide plan will help mitigate. "I would always say the first step is to prevent new problems, meaning don't let people build in places where we know they're going to flood."

Planning groups have no authority to compel municipalities to implement projects; that's up to each individual county or city. "Identifying and solving [structural] problems has always been primarily a local responsibility. This isn't going to change that. But this is intended to try, first at a regional and then a statewide level, to get a grip on the overall degree of flood risks that exist, and what some of the potential solutions might be."

Planning groups are seeking public input on flooding in your area; use the map at bit.ly/3JtK0A8 to comment.

See an overview of the process at bit.ly/3uxSJNh, and a schedule of Region 10 meetings at lowercoloradolavacaflood.org.