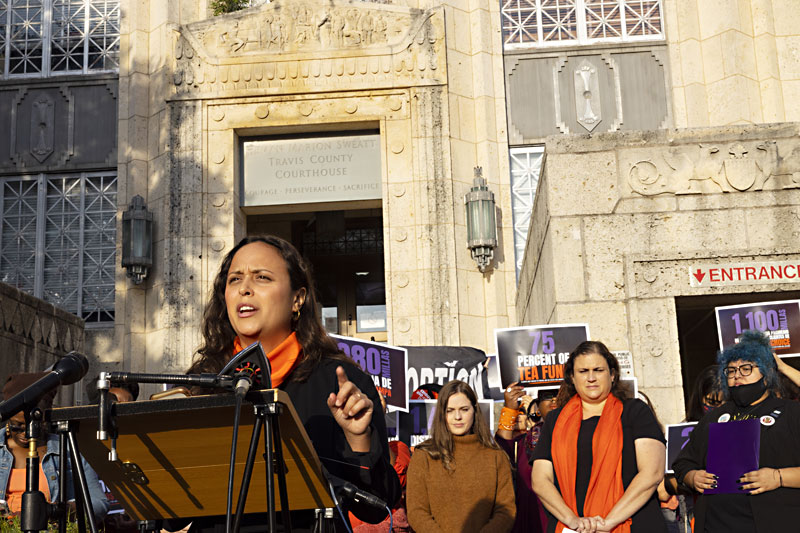 Though pro-choice Texans have lost a few battles to Texas' near-total abortion ban, Senate Bill 8, in the last few weeks, there is still a fight left. After the U.S. Supreme Court in December and Texas Supreme Court in March together threw out all the viable paths for a case against SB 8 brought by Whole Woman's Health and other plaintiffs, two newer legal challenges could still thwart people who try to use SB 8 to sue anyone who "aids and abets" an abortion after six weeks of pregnancy. "It's an ongoing crisis with no end in sight," said the Center for Reproductive Rights' Marc Hearron, who was lead counsel on the Whole Woman's Health case.

Hearron points out that the courts have so far permitted SB 8's bounty hunter model – allowing private citizens to sue as a workaround of constitutional rights. That precedent has the potential to unravel our justice system and constitution, he said; in fact, a gun rights group submitted a brief to the U.S. Supreme Court in support of abortion providers, which argued that if the vigilante law is allowed for abortion, later it could block gun ownership.

Two Texas abortion funds that help patients pay for abortion-related expenses – Texas Equal Access Fund and Lilith Fund – have filed suits aimed at SB 8 in federal court that could potentially reach SCOTUS. They argue, among other things, that SB 8 violates abortion advocates' right to free speech by preventing them from communicating openly to clients and donors.

Jaylynn Farr Munson, communications director for Austin-based Fund Texas Choice, said the nonprofit has not yet filed suit but is in for a potential court battle after receiving a cease-and-desist letter from state Rep. Briscoe Cain, R-Deer Park, which claims that "your organization is committing criminal acts." Cain posted the letter to social media, which Munson said was meant to scare donors out of supporting the organization. In addition to Fund Texas Choice, Cain addressed the letter to the North Texas Equal Access Fund, Lilith Fund, the Afiya Center, Frontera Fund, the West Fund, and Clinic Access Support Network. "If they can't close us down, they'll try to basically starve us of funding," Munson said.

Attorney Jennifer R. Ecklund responded on behalf of all the recipients, telling Cain that SB 8 was void from its inception because of its unconstitutionality (federal and Texas law back this up, as does a Texas judge's December ruling). Therefore, his public accusation that the organizations are criminal is "false and defamatory" and posting the letters publicly "demonstrates that the defamatory effect of your words is intentional."

"I try not to look in the crystal ball too much because I'm frequently disappointed," Hearron said, "but I think the more this SB 8-style strategy happens, it seems like at some point the courts are going to wake up and say, 'This is not how constitutional rights are going to be treated in this country.' I don't know how long that's going to take."

Of course, that constitutional right itself may dissolve. The Supreme Court will likely issue a ruling by July on a Mississippi challenge to Roe v. Wade. "For us, it already feels like a post-Roe world because [almost all] of our clients have to leave Texas," said Munson.

Funds have been serving more abortion­-seekers than ever – before SB 8 went into effect, about 45 people a month called FTC, and that number has since risen to more than 300, Munson said. In-state options still exist, though many are illegal. Abortion pills can be ordered in a state with fewer restrictions and then sent (or even forwarded) to Texas. And national organization If/When/How offers free legal consultation through a helpline at 844/868-2812.

Whole Woman's Health founder Amy Hagstrom Miller told the Chronicle that, ultimately, public discussion of abortion needs to shift. Rather than focusing on life-and-death situations, she said, destigmatizing abortion means recognizing its overall value in our society. "To know that you could if you needed to, that's how multiple generations of people in this country have lived their lives now ... Helping people travel to a different state for an abortion – that's a Band-Aid. That's not the long-term solution. The long-term solution is to shift the culture that allowed these laws to happen."

AISD Balances Its Books With What Robin Hood Left Behind
Everybody gets a raise, but 600 positions are getting cut