The Trouble With Tank Farms 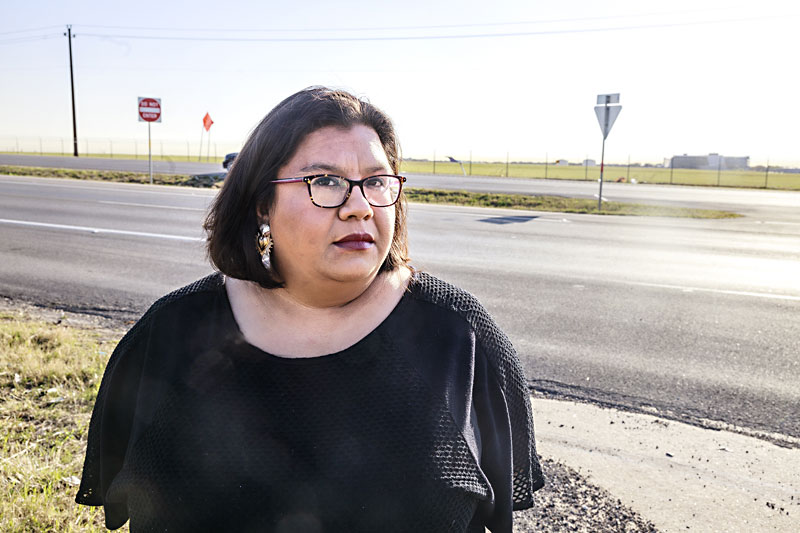 In September of last year, Amanda Carrillo, a 40-year-old mother of four who lives in a home on McCall Lane in Southeast Austin, opened up her mailbox to find a letter from a local developer. It told her that Austin-Bergstrom International Airport was planning to new build a multi-million­-gallon fuel storage site – across the street from her house.

Carrillo was stunned. Though the plan for the new fuel storage site had been approved by City Council back in 2018, this was the first she was hearing about it. She wasn't alone. "I went door-to-door and found out that nobody in my community knew about anything," said Carrillo, who grew up in the working-class neighborhood. "Never received any notifications ever. ... They had no clue."

Now, just months before the airport is hoping to begin construction on the new fuel storage facility, an effort led by neighbors like Carrillo to halt it due to health concerns is gaining steam – setting up the coming weeks as a major test of the city's stated commitment to environmental justice.

For airport officials, the new fuel storage site is a must-have. The airport, which is in the process of expanding, served a record 17.3 million* passengers in 2019 and is expecting to break that record with the relative abatement of the COVID-19 pandemic in 2022. By 2037, it expects to serve in excess of 30 million passengers yearly.

That volume of traffic has strained the airport's resources in a number of ways – including its fuel storage capacity. ABIA acting Communications Director Sam Haynes said that while most airports typically have a five- to seven-day fuel supply on hand, ABIA only has a two- to three-day supply. That has created issues during air travel surges the weekend of the city's Formula 1 race, when several Austin-bound flights had to be diverted because of a fuel shortage.

In addition to potential delays and diversions, Haynes said that the lack of fuel storage capacity makes it more difficult to attract new flights from airlines. That particularly matters for the kinds of transcontinental flights that require significant fuel capacity.

The question is not whether the airport, at its current rate of growth, needs more fuel storage capacity. The question is where that capacity should be built.

"When it comes to airport planning, we have to look at all of our available space within our footprint, and when you factor in current land use, when you factor in the floodplain, when you factor in existing structures and buffer zones* for navigational aid, FAA facilities, it kind of becomes a process of elimination for where projects best fit," Haynes said.

With those constraints in mind, the airport decided to build the new site along US 183 between McCall Ln. and Metropolis Dr. – despite the fact that there are numerous houses along McCall Lane and on adjoining Seeling Drive, as well as a VA clinic and another housing development nearby. 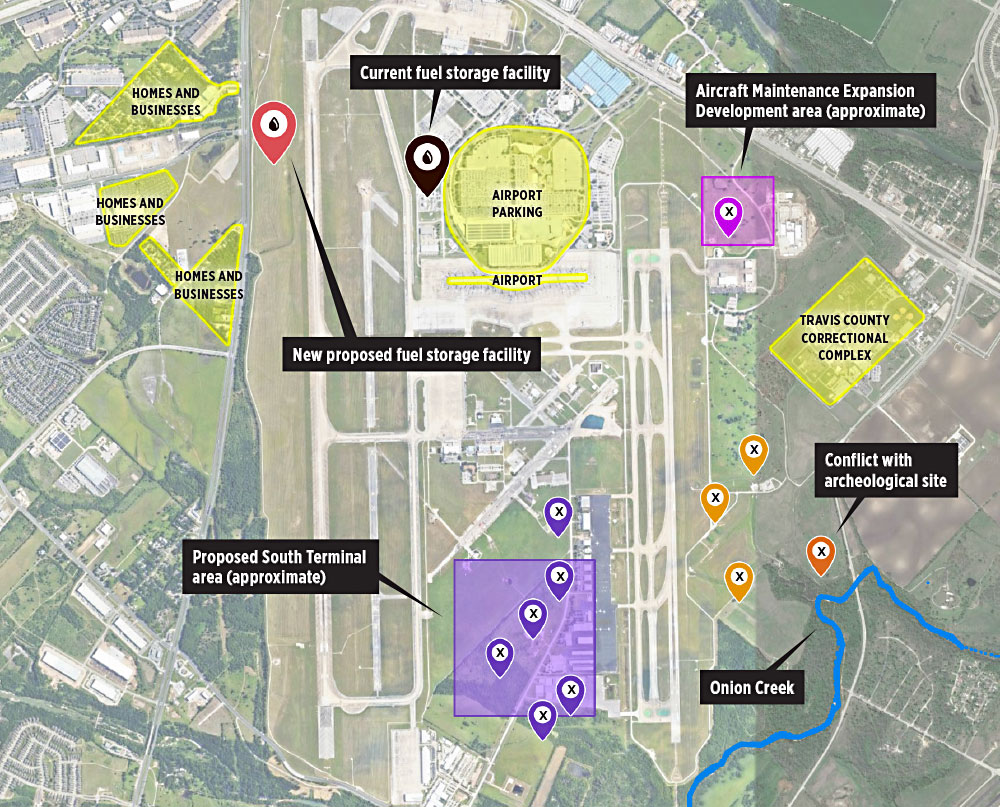 Existing structures marked in yellow. The purple, orange, and pink markers represent possible alternative fuel storage sites, color coded based on the issues the airport presents regarding each site: Purple sites conflict with the new, proposed South Terminal. Orange sites conflict with the environment, due to their proximity to Onion Creek and, in one case, an archeological site. The pink site conflicts with a Aircraft Maintenance area the airport plans to develop. (Map © Google Earth, 2022)

"The airport has shared with me numerous times that they are committed to being good neighbors, and in doing so, you have to understand that this is a predominantly working class who doesn't have time during the workday to tune in to a commission meeting or a council meeting," Fuentes said. "The outreach has to be in a different variety of formats."

In recent months, public engagement has skyrocketed. The airport held a pair of well-attended public engagement meetings earlier this year, while Fuentes, Mayor Steve Adler and other elected officials attended a community meeting about the project in early March.

Neighbors at those meetings almost universally expressed their opposition to the airport's plan, arguing that it would put their health and financial standing at serious risk.

Many in East Austin who have joined the effort to stop the airport's proposal have been driven by their memories of the gruesome effects of a tank farm that for decades was located in East Austin near the intersection of Springdale Road and Airport Boulevard and used for chemical storage.

The community around the site fought successfully to have the tank farm moved in the early 1990s, but the environmental damage to the area was so extensive that it is not suitable for residential use today. Residents who lived in the area during the tank farm's years of operation experienced a range of ailments including asthma, skin rashes, lesions, and cancer that they believed were connected to extensively documented air, soil, and water pollution, while their property values plummeted relative to the rest of the city.

"Native East Austinites have been fighting the overabundance of industrial zoning in East Austin for decades," Bobbie Garza-Hernandez, a communications strategist with Pink Consulting and former aide to mayor Gus Garcia, said. "This is just one more."

Airport officials see it differently. In a memorandum sent to the mayor and city council members in mid-March, airport CEO Jacqueline Yaft wrote that there is no parallel between the East Austin tank farm and the proposed airport fuel storage site, due both to the type of new slated to be stored at the new site as well as a range of enhanced safety and regulatory measures. Yaft noted that a 2020 environmental assessment found that the site would have "no significant impact."

But many East Austin community members remain skeptical that the health effects of the tank farm on residents can be completely mitigated by safety measures or even fully known before the site is built. Now, the two sides are in a standoff. Haynes said that alternative sites proposed by community interests are not viable, while Fuentes has proposed a resolution to be discussed at city council in April to relocate the planned site. Thus far, she said, only councilmembers Chito Vela and Kathy Tovo have committed to supporting the resolution.

"It has been challenging to get enough support to get on the agenda for council consideration," Fuentes said. "For me, it begs the question of, if this was happening in another part of Austin, would it be this difficult?"

Even so, Garza-Hernandez said that there are positive signs for the campaign to move the site – with the involvement of groups like the Austin chapter of the Sunrise Movement and certain westside neighborhood associations are indicators that the issue is being taken seriously outside of East Austin.

"What is different this time is that you have more community wide environmental organizations that have stepped up in solidarity with this neighborhood," Garza-Hernandez said. "We did not find that when we were fighting the East Austin tank farms."

Garza-Hernandez said she believes that an increased focus on environmental racism in recent years has helped organizations fully understand the implications of building a potential biohazard into a Southeast Austin neighborhood, and the City of Austin itself, which adopted a Climate Equity Plan that it says was crafted "through the lens of racial equity" last year, has stated that it understands the ways in which environmental risks are unevenly distributed throughout the city. The city council's approach to Fuentes' resolution and the proposed tank farm site will send a signal about that commitment to climate equity – as well as about who Austin's runaway growth will benefit and who it will likely harm.

"Where are we going to go?" Carrillo said. "Austin is getting so expensive. We understand the growth, but we worked hard to make this our home, and then you're going to come and not tell us crap and put this here?"

For the community members and activists opposing the plan, that is the key question.

"We were here first," Carrillo said. "We were here before you. We deserve to live in a healthy environment, and we're not going to go anywhere. We're going to keep on fighting, because this is ours. You may have money, but we have voices... We're small, but we'll fight back."

* Editor's note Friday 4-1 2:42 pm: This story has been updated to correct the number of passengers the airport served in 2019 and the title of a the space surrounding landing strips. AUS served 17.3 million passengers in 2019, not 19 million, and the areas are not called bumper zones, but buffer zones. We regret our errors.

For Escuelita del Alma, History Prepares to Repeat Itself
Preschool and child care center on the move again?