Corrupt Cop on the Chopping Block 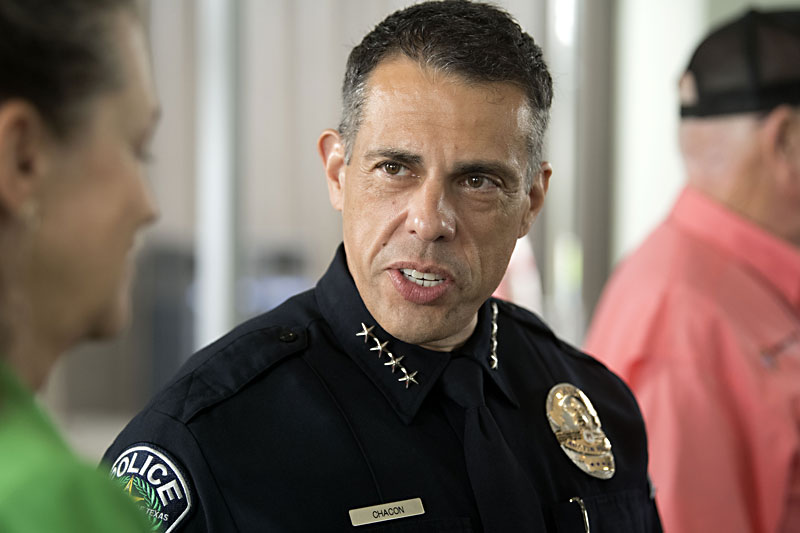 In the memo, Upton admits to writing a note to the suspect in the alleged assault – intentionally out of view of his body-worn camera – telling him that if he entered his residence and shut the door, he couldn't be arrested. During the course of the Internal Affairs investigation that preceded Chacon's decision to fire Upton, the officer admitted to investigators that he knew what he was doing at the time was wrong, but he did so as a "shortcut" to what he deemed was the more just outcome. "I was concerned [Mr. NL] would be arrested because of policy," Upton told IA. "I was concerned that ... it didn't best serve justice that night that he go to jail and have [an] arrest on his permanent record."

But Upton's actions not only violated Austin Police Department policy, Chacon wrote in the memo, they could be criminal as well. "A preponderance of the evidence" indicates that Upton hindered the arrest or prosecution of Mr. NL – a class A offense under state law. "Upton admitted that he committed each element of this offense, as he intended to hinder the arrest of Mr. NL, aided Mr. NL in avoiding arrest, and warned Mr. NL of his impending arrest," the memo reads. According to Chacon's memo, the incident has been referred to the Public Integrity Unit at the Travis County District Attorney's Office for potential prosecution.

The incident that resulted in Upton's indefinite suspension – i.e., his firing – occurred during the early hours of Aug. 11, 2021, but details of the officer's conduct were just revealed in Chacon's 22-page disciplinary memo, published March 18 by the Office of Police Oversight. Officers responded to a "Trespass Urgent" 911 call made by a man, identified as Mr. NL in the memo, who claimed his girlfriend, identified as Ms. VS, was being physical with him and refused to leave his residence.

While Upton and two other officers, unnamed in the memo, drove to the scene, the call was upgraded to a "Disturbance – Hot Shot," which means someone is facing imminent threat to their life or safety. When they arrived, they separated Mr. NL and Ms. VS to collect statements from each. Both said they were involved in a physical altercation, although each offered differing versions of events – a typical challenge officers confront during domestic violence calls.

Mr. NL told Upton that his girlfriend hit him, but he did not feel any pain; Ms. VS, however, told the other officers that her boyfriend threw her against a wall, which injured her finger. Later, while still on the scene, Mr. NL told Upton that the dispute was over Ms. VS refusing his attempts to have sex with her. Mr. NL also told Upton that when he was making the 911 call, Ms. VS struck him with a glancing blow that didn't hurt. He responded by pushing her away, potentially injuring her finger in the process.

At this point under Texas law, enough probable cause had been established to require an arrest. Mr. NL and Ms. VS agreed that one person, Ms. VS, was assaulted and injured – opening up Mr. NL to a potential charge of assault with injury, family violence. But the three responding officers were unsure, so they decided to consult their sergeant, Thuy Bayer, for advice.

“Thank god that the victim felt comfortable sharing this information with the Victim Services counselor. Otherwise this incident would have gone unnoticed.” – Liz Donegan

While one of the unnamed officers consulted with Bayer, who has more than two decades of experience at APD, Upton returned to Mr. NL, who told him he was worried about being arrested. Upton, who was hired by APD in 2013, responded by surreptitiously writing Mr. NL the note. When the unnamed officer returned with Bayer's determination that they needed to arrest Mr. NL, Upton tore out the note to Mr. NL from his notebook and disposed of it. When the officers knocked on Mr. NL's door to make the arrest, Mr. NL did not respond. They couldn't make an arrest, so the officers and Ms. VS eventually left the scene.

Upton, who is appealing Chacon's firing decision, told no one that night about the note; in fact, were it not for a follow-up call made by a counselor within APD's Victim Services Division, Upton's conduct may have never come to light. During the follow-up VSD regularly conducts with alleged victims of violent crime, Ms. VS said, "This is why I don't like police or why I don't trust police," the counselor recalled. This alarmed the counselor, prompting her to ask Ms. VS why she said that.

Ms. VS said that after police left, Mr. NL called Ms. VS to tell her about Upton's actions, which helped him evade arrest. "He feels like he got away with hurting me, because of that," the counselor remembered Ms. VS telling her. The counselor concluded that Mr. NL may have told Ms. VS about Upton's actions as a way of discouraging her from contacting the police in the future. "I think he used that against her to make her feel like if you report [alleged abuse] nothing's gonna happen to me," the counselor said during her IA interview.

Based on Chacon's memo, he, Bayer, and the Victim Services counselor were all disturbed by Upton's actions because they could have placed Ms. VS at further risk and because "as a consequence of this experience, Ms. VS may be demoralized or discouraged from reporting future crimes to police," the memo said.

Liz Donegan, a retired sergeant from APD's Sex Crimes Unit and current co-chair of the Austin/Travis County Sexual Assault Response and Resource Team, said what disturbed her most was how Upton single-handedly moved the investigation in a different direction. "He knew the law well enough to exploit it in a way to benefit someone suspected of domestic violence," Donegan told the Chronicle. "He actively helped the suspect, which is the complete antithesis of what law enforcement needs to do with victims."

The incident is especially troubling given the broken trust between survivors of sexual assault and APD following years of scandal in how the department has responded to sex crimes. Donegan said it is likely that Upton's actions don't represent APD's broader attitude toward sex crimes, with Chacon committed to improving as chief, but it is also a reflection of the work APD still needs to do.