Chaos Reigns at the “Fyre Festival of Crawfish” 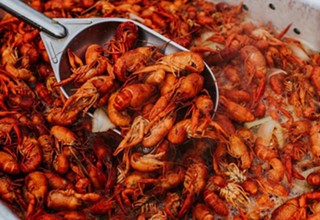 Last weekend marked the return of the Austin Crawfish Festival after two pandemic hiatus years, a promised smorgasbord of mudbugs held at Carson Creek Ranch in South­east Austin. A Facebook post by Hello Entertainment Group touted "TWO days of Cajun classics, Texas Country and Jazz," and most importantly, more than 10,000 pounds of crawfish. For $49, VIP ticketholders were promised "All You Can Eat" with an hour early entry, but what festivalgoers found was quite different. On Saturday, March 5, attendees were already posting on social media about long lines for parking and food and an inadequate supply of crawfish. The festival responded that "on Saturday, the VIP sections boiled over 13,000 pounds of crawfish for patrons. Although not ideal, the nature of cooking crawfish suggest[s] we may have a line at times."

Early Sunday morning, the festival sent an email through Eventbrite to ticket holders about the parking situation, as some had posted on social media that they had been turned away: "It is important to clear any rumors, we were not 'shut down' due to maximum capacity. Parking lot capacity was shut down due to [it] being full." The festival recommended using rideshare to avoid the parking lots altogether, stated that "none of the vendors ran out of crawfish on Saturday," and promised that "we expect far less issues today."

On day two, opening was delayed till 12:30pm because of wind, and parking, which was $20 cash only, was still tight – some posted that the fire marshal was turning people away. In a Facebook post Hello Entertainment blamed the venue for the parking woes, saying "we have worked with them to find a better solution." As one Reddit user put it, "stuck in traffic trying to get into the parking lot for past 1hr+. And I'm HANGRY."

When customers did enter March 6, they found no crawfish yet again. Despite the festival's assurance at 11:40am that there would be "1,500 lbs of crawfish until 4pm AND then we will have another 4,000 lbs.," by 2:30, crawfish still hadn't shown up to the VIP area, though in general admission some was available for purchase (and long lines). Several Reddit users commented that the live music stage was having issues due to a lack of power. One Twitter user shared a screenshot of a Facebook post Sunday morning in service industry group In the Weeds suggesting a last-minute scramble for mudbugs, though not confirmed to be from festival organizers: "Anyone know where I can find 2000 pounds of live crawfish to purchase today by 12[?]"

No refunds have been issued, but the festival has advised disgruntled patrons to email info@austincrawfishfest.com. One Reddit user recounted leaving the fest, trying "to tell people to turn around and save themselves," and dubbed the fiasco "the Fyre Fest of Crawfish. Be warned!"