Safety and Security Will Be Council’s Words of the Day

Be careful out there 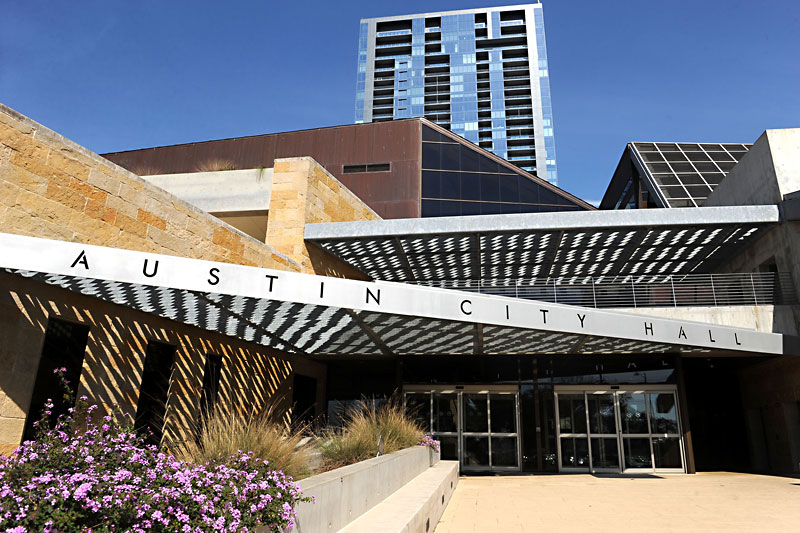 Austin City Council meets today, Feb. 17, to take up an agenda that's not lengthy but is still packed with significant items. Here are a few we'll be watching closely.

Mayor Pro Tem Alison Alter has brought a resolution directing staff to procure a contract for an external audit of Austin Water's infrastructure and operations, in hopes of understanding why the utility has had to issue three boil-water notices in four years. Alter's resolution asks that the audit review how AW managed these events, what policies and procedures are in place to prepare the utility for water supply crises, and if the city's water plants are prepared to deal with seasonal, long-term, and extreme events that affect water quality. Read more on fallout at AW from the boil-water notice.

A staff-initiated ordinance that would create a new law enforcement agency, the Office of the City Marshal, is back on the agenda – but will be postponed once again. The city marshal would provide security at Municipal Court, a duty currently handled by a private security firm with some help from Austin police officers. Assistant City Manager Rey Arellano, who oversees the city's public safety agencies, has committed to public engagement before Council considers creating a new police force in town, but justice advocates say that has not happened yet. Plans are being drawn up now to create engagement opportunities in March.

Part of the reason Arellano is pushing to bring back a stand-alone city marshal (the former office was folded into the Austin Police Department back in 2006) is that APD wants the cops stationed at Municipal Court back on patrol. Council Member Mackenzie Kelly has a resolution directing leadership at APD, Fire, and Emergency Medical Services to draft plans by April 30 to address their staffing shortages. Kelly is asking for a look at how recruitment, retention, and retirement practices are affecting staffing; each department's plan must include a detailed timeline for filling vacancies, along with any projected capital investments (e.g., new stations, vehicles, or training facilities) that could be needed.

Hail to the (New) Chief

Robert Luckritz will take on Kelly's directive as his first assignment as the new chief of Austin-Travis County EMS, pending his confirmation at today's meeting. Luck­ritz, a hospital administrator and former EMS chief in the New England area, recently beat out 20-year Austin EMS veteran Jasper Brown, the current interim chief, who's been blamed by a number of front-line medics for the cultural maladies that have led to EMS' staffing crisis.

Council could vote to settle lawsuits filed by Justin Howell and Anthony Evans, two of the protesters who suffered grievous injuries from APD's "less lethal" munition during the May 2020 Black Lives Matter protests in front of APD's Eighth St. headquarters. The settlement amounts are unknown (and won't be revealed until after Council deliberates in closed session); in December, Council directed staff to pursue settlements in these and other excessive-force lawsuits filed by Eighth Street survivors (more than a dozen so far), rather than pursuing the cases to trial.

Council will vote on an ordinance eliminating the collection of fines on overdue materials for adult library patrons. Staff expects the change to result in more than $300,000 in lost General Fund revenue over the next few fiscal years, but eliminating the fines for adult patrons (fines for children's materials were eliminated in 2019) would create a more equitable library system. "Overdue fines are a regressive and unnecessary policy that most negatively impacts the Austinites in each Council District who are least able to pay," reads the Library Commission's recommendation to Council, approved unanimously, Jan. 24.